The West Central Health District in North Platte is dealing with COVID vaccination levels behind all the others health districts in the state, and the head of the district said it has the supply but demand is lagging.

Just under 31% of eligible Nebraskans over the age of 16 in the six counties of the West Central Health District are fully vaccinated, according to Nebraska Department of Health and Human Services data as of Thursday. The two other surrounding health districts – covering the Panhandle and Southwest Nebraska – are at similar levels in the low 30s. Other districts in the state, however, are at levels near 50%. As a whole, the state's eligible population sits at 46.5%.

“We have the capacity and ability to vaccinate," said Shannon Vanderheiden, the executive director of the North Platte-based health district. "The vaccinations are available, and we truly encourage people to get vaccinated if they haven't.” 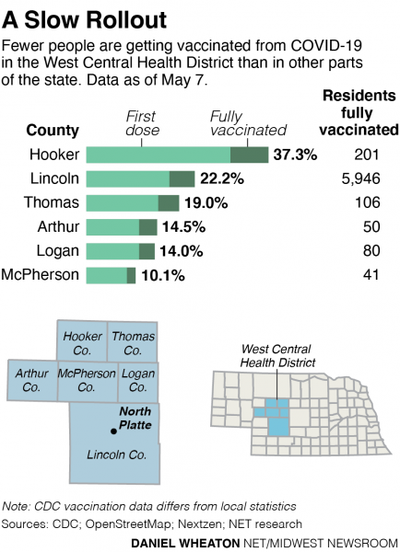 However, the slowing vaccination rates is not just a problem felt in rural counties in west central Nebraska; it’s a problem all across the state and country.

The disparity in data also extends into the six counties which Vanderheiden oversees. Some counties – like Lincoln and Hooker – have more than 30% of the eligible population fully vaccinated, according to West Central Health District data. But just 13% and 15% of residents are fully vaccinated in Logan and McPherson counties, respectively. The combined population of the two rural counties is 1,143 people in 1,431 square miles, according to 2019 U.S. Census Bureau estimates.

The difference between vaccinating North Platte – where a majority of the health district's population resides – and vaccinating some of the country's most sparsely population counties is a challenge for health officials. To combat this, Vanderheiden said, they've offered clinics directly in businesses and completed vaccinations in people's homes.

Vanderheiden knows the demand for vaccinations has dropped in the last few weeks, but, as more and more people get vaccinated, it may be a natural occurrence to fewer needing shots, she said.

“As we increase the number of people who are getting vaccinated, it's just a natural transition for that number to continue to decrease as far as who is coming in on a daily basis," she said.

Kaiser Family Foundation polling shows rural America is now one of the most vaccine hesitant segments of the American population – with 17% saying they would definitely not get a COVID-19 vaccination in the poll's April results. However, Vanderheiden is still optimistic because it's something she's dealt with since the first vaccine was authorized last December.

"For a lot of individuals, it wasn't they didn't want to get vaccinated, or they weren't planning on getting vaccinated," Vanderheiden said. "But they were just kind of waiting a little bit before they did."

Now, she said, she's seeing some of those individuals starting to roll up their sleeves.