A rare mineral called niobium could produce an economic boom for southeast Nebraska, and be a source of tax revenue for the state. Decisions on taxes would be made by the Legislature, where at least four senators own stock in the company that wants to mine niobium. It is an issue in which public and private interests intersect.

Niobium is used in everything from alloys to make lighter and stronger steel for cars, to superconducting magnets in MRIs. Currently, most of the mineral comes from mines in Brazil, and some from Canada. But soon, niobium could also be produced near the town of Elk Creek, Nebraska, population 98, about 60 miles southeast of Lincoln. 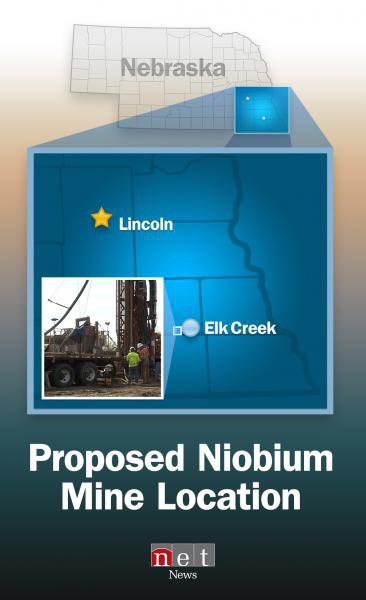 In a video on the website of NioCorp Developments Ltd., the Canadian company that wants to mine the Nebraska deposit, CEO Mark Smith is enthusiastic about the possibilities.

NioCorp has been doing test drilling for several years, and the company says a mining feasibility study will be completed later this year. Smith said the company wants to begin actual mining in 2017.

If that happens, "This would be a huge deal for southeast Nebraska," said Tony Fulton, formerly a state senator representing a Lincoln district, and now a member of NioCorp's board of directors. 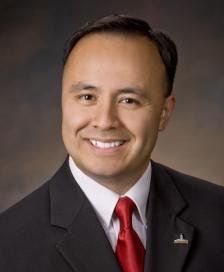 Fulton, originally from the southeast Nebraska town of Auburn near Elk Creek, said it would take 800 to 1,000 construction workers to build the mine, and there would be 250 to 300 high-paying jobs after that. NioCorp estimates revenues of $178 million a year.

If NioCorp’s vision becomes reality, it could also pay off for some current and former Nebraska lawmakers who have been investing in the company.

Fulton said he started buying stock in the company, then known as Quantum Rare Earth Developments, around November of 2012, shortly before he left the Legislature. He says he paid 10 to 12 cents a share, and later added to his holdings, to reach 1.4 million shares. At the recent closing price of around 80 cents, that would mean the former state senator’s stock is now worth more than $1 million.

NET News reviewed all 49 current state senators’ financial disclosure forms, and learned at least four lawmakers have a financial stake in NioCorp. Others may own the stock, but because of confusion about reporting requirements, not list it. 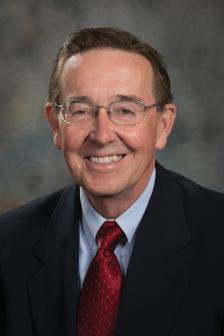 One of the current senators with NioCorp stock is Sen. Al Davis of Hyannis. A Sandhills rancher and an investor, Davis reported financial assets worth more than $10 million on his annual Statement of Financial Interests filed this March.

Davis said he was thinking ahead about state finances.

"I (am) always trying to figure out how Nebraska’s going to pay for things. We already are high taxed in sales, income and property," Davis said. "We are not a state that is rich in natural resources but we do have a couple of entities that can generate severance tax -- one of which in my district is the Cameco company, which is a uranium company – and then the niobium development down here."

Nebraska already taxes uranium produced near Crawford in Davis’s district, as well as oil and gas. When Davis introduced his bill to tax niobium, Fulton said a shareholder brought it to his attention. Fulton then met with Davis.

"I went to him as a concerned citizen, explained the position of NioCorp is, we’re not opposed to paying a severance tax. Indeed, we would be glad to work with you to that effect. But the timing on this could kill the whole project," Fulton said. 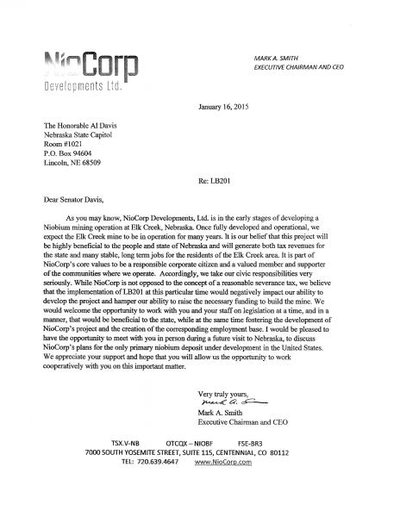 Jack Gould of the government watchdog group Common Cause Nebraska said that raises a question of whose interests Davis’s actions served.

Davis said he was serving both the public and the company's interest.

"I’d say it was in the best interest of the public and also the company. The public, because I think it’s important that we get the mine developed, and if we jeopardize their financing, they’re not going to do anything with it. And obviously for the company’s benefit, it helps them get their financing in place and gets them going," he said.

As both an investor and a state senator dealing with legislation affecting the company, Davis was asked, did he have a conflict of interest?

"If I had a conflict, I put a bill in place which was going to tax my investment. So I was working against myself if you want to say that," he said. "I withdrew the bill, not because of potential profits for me but because I viewed it as good for Nebraska if we can get the mine up and going – I think it’s going to be a tremendous opportunity for us."

Davis also remains optimistic about niobium as a source of state revenue. He says he intends to reintroduce a severance tax bill.

"I intend to do that. But I want to let the mine get up and running," he said. "If I get reelected next year, I’ll be here for five more years. If not, we have a letter that will go on to some successor of mine saying ‘We’re ready to be taxed, once we’re up and running.’”

In a conference call last month, NioCorp CEO Mark Smith said he hopes the mine will be up and running in late 2017.

Editor's Note: Sen. Davis is not the only Nebraska legislator with a personal investment in NioCorp. Tuesday, NET News hears from other state senators, and reports on how financial disclosures and potential conflicts of interest are handled.

Correction: An earlier version of this story contained an incorrect figure on the estimated value of Sen. Davis's shares. That figure has been corrected, and the per share price updated.