Niobium and the Nebraska Legislature: Disclosure and Potential Conflicts of Interest

Four members of the Nebraska Legislature report owning stock in a company that wants to mine the rare mineral niobium in southeast Nebraska. But confusion about reporting requirements means more senators may have a personal financial stake in a company they could decide to tax.

At least four members of the Nebraska Legislature own stock in NioCorp Developments Ltd. -- a Canadian company that wants to mine a rare mineral called niobium near the southeast Nebraska town of Elk Creek.

That mining could produce an economic boom as well as generating significant tax revenues for the state. Earlier this year, Sen. Al Davis of Hyannis, a NioCorp stockholder, introduced a bill to tax niobium -- then withdrew it at the request of Tony Fulton, a former state senator now on NioCorp's board of directors. 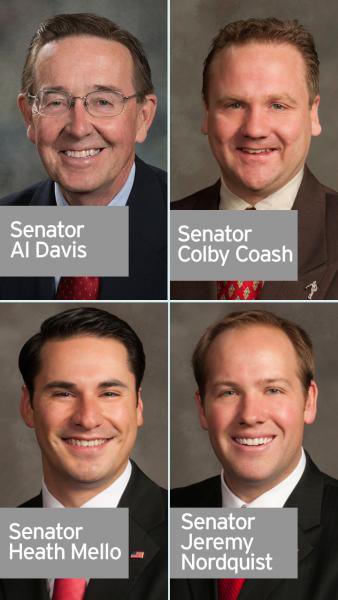 The action raised questions about conflict of interest for Jack Gould of Common Cause Nebraska. Davis said if anything, he was hurting his own interest by proposing a tax. He said disclosure is the way to handle potential conflicts.

While four senators disclose having NioCorp stock, more may actually own it, but not realize they are supposed to be disclosing it.

In addition to Davis, the three other current members of the Nebraska Legislature who own stock in NioCorp are Omaha Sen. Heath Mello, Omaha Sen. Jeremy Nordquist, and Lincoln. Sen. Colby Coash.

Mello said he started buying the company’s stock about four and a half years ago.

"Initially I think I bought 24,000 shares, and then last summer when it got up into about 70 cents a share, I sold off about half of the investment," he said. That sale would have brought in more than $8,000, and Nordquist’s remaining shares would be worth about $10,000.

Sen. Coash also lists Niocorp stock in his Statement of Financial Interests. Those statements do not require senators to disclose how much of any stock they own, and Coash declined an interview request for this story.

Senators have to file Statements of Financial Interest with the Nebraska Accountability and Disclosure Commission every year. If the stock they own is worth more than $1,000, they are supposed to report it, according to commission executive director Frank Daley.

But it appears not every senator understands that. When first asked about owning NioCorp stock, Davis showed a reporter NioCcorp listed in his E*TRADE account. But it was not listed in his Statement of Financial Interests last year.

When told of Daley’s explanation of the disclosure requirement, Davis said he asked for more information.

"I went up to the Accountability and Disclosure Commission and asked them. I said, ‘Tell me exactly what we’re required to disclose.’ And they told me it was everything basically unless you had a managed fund by someone else that you really didn’t control," Davis said.

"I wanted to comply with the law, obviously," Davis said.

Last year, Davis' Statement of Financial Interest was five pages and listed E*TRADE, for example, but not NioCorp. This year, his statement of financial interest is 61 pages long, including detailed statements of his investments, including NioCorp. Davis’ NioCorp stock, for which he paid $85,000 over the years, is currently worth about $160,000.

Other senators may also own NioCorp stock. A check by NET News shows more than a dozen senators, like Davis until this year, list brokers like E*TRADE, Charles Schwab & Co., or TD Ameritrade, but not individual stocks. Mello says he is surprised other senators don’t disclose individual stocks they own, like he does.

"That’s maybe an issue that the Accountability and Disclosure Commission needs to dig in a little bit more, and either clarify to public officials that they need to provide information on all individual stocks they own and not simply brokerages that you may use, because that seems to be an issue or a loophole with regards to current public disclosures," Mello said.

Daley said the commission does tell senators they’re supposed to report individual stocks if they own them personally – although not if they’re in an account where someone else makes the decisions. But Daley said the system depends on senators’ self-reporting.

"If there is a general misunderstanding out there as to what is required, I’ve got a concern. And if the information that is required to be disclosed by law is not being disclosed, then I have a concern," Daley said.

If senators’ official duties could produce a personal financial gain for themselves or a business they’re associated with, Nebraska law requires them to disclose they have a potential conflict of interest.

But once they've disclosed that, they can still go ahead and vote. Jack Gould of Common Cause Nebraska said that is a problem.

Nordquist says prohibiting senators from voting if they have potential conflicts could be going too far. Nordquist gives the example of decisions about the state’s property tax credit fund, which affects virtually every state senator.

"On any issue there are always little conflicts that can arise. So I think to just say that people shouldn’t vote – I think it really needs to be left up for that individual to decide, and then the public to judge whether or not that individual legislator made the right decision," he said.

Daley of the Accountability and Disclosure Commission described senators’ reasoning when they decided, decades ago, to allow themselves to vote despite potential conflicts of interest as "It’s a citizen legislature and there are constantly going to be conflicts of interest.

"I think that’s the rationale that’s built into the current law. Whether it’s good public policy or bad public policy is certainly a subject for debate," Daley said.

Ultimately, that debate could affect everything from niobium taxes to the way the Nebraska Legislature does business.

Editor's Note: As part of this reporting project, NET News also reported on the niobium mining project and the intersecting interests surrounding it in the Legislature. Read that story here. Thursday, NET News reports on the progress of the mining site near Elk Creek, Nebraska.