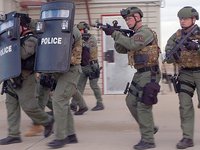 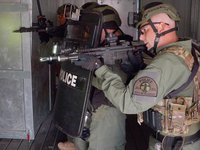 SWAT teams in Nebraska are moving a little slower.

Changes in methods and training used by the police special tactics units have been evolving in the hopes of making high-risk raids safer for officers. 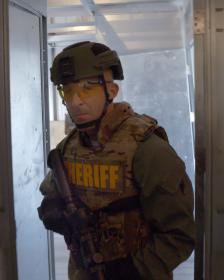 In an NET 360 Video Special, CLICK HERE see what it looks like to be a member of the SWAT team during a training exercise.

Around the country SWAT teams faced criticism for relying too heavily on fast-moving, door-busting raids to seize drugs or issue arrest warrants.

When deployed, the units still hit the ground with impressive firepower and protective equipment. There may be moments of chaos. The difference is the speed and force used to “dominate” where a suspect has been holed up.

“What we try to do now is deal with this with less force than in the past,” said Mike Kerby, an instructor at the Nebraska Law Enforcement Training Center.

The approach “minimizes that go-fast approach that early days of SWAT were known for” according to Kerby. By moving more deliberately it gives both police and suspects an opportunity to think through what’s happening in a tense situation.

The Kearney SWAT team began employing the new approach this year. The specialized unit, officially known as The Kearney/Buffalo County Emergency Services Unit, blends officers from the Police Department with deputies from the Sheriff’s Office.

The team, unusual for a county with less than 50,000 people, was set up to give a select group of officers the specialized weapons and training needed to respond to tense and dangerous encounters.

The group’s commander, Sgt. Kyle Harshbarger, said the team could be summoned for “an armed, barricaded subject, high-risk search warrant where they might be armed, all the way to a hostage situation.”

In those situations, Harshbarger contends, “if you have a team that knows how to use the tools, knows the tactics, works together as a team, that makes it safer for the officers and for the suspects and everybody else who's involved."

“You have a coordinated effort,” he said.

However, the hard-line tactics used traditionally by SWAT teams nationally were increasingly called into question.

Reporting done by the New York Times earlier this year revealed there had been at least 94 deaths during “no-knock” police raids around the U.S. from 2010 through 2016. Sixteen of those killed were police officers.

From a safe distance the team leader announces they are police officers with a warrant and advise the subject to come outside, hands up. 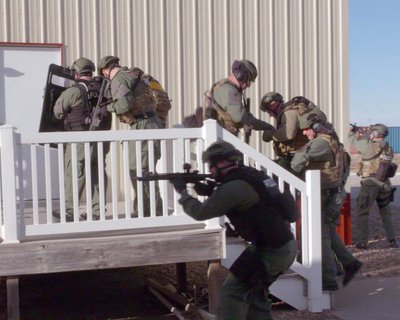 If there is no response the team advances, "breaches" the door with a battering ram, and detonates "flash-bang" grenades as a distraction 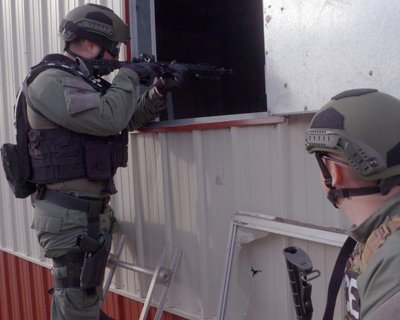 A member of the team also breaches a back window to form a ring around the building. 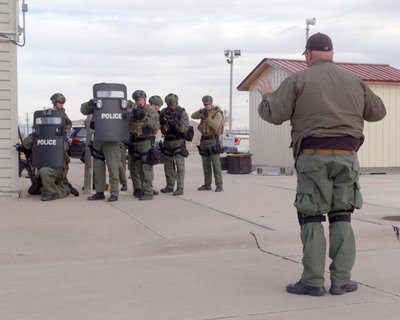 If all goes smoothly, the suspect will understand the risks and leave the structure under the watchful eye of the SWAT team.

The National Tactical Officers Association issued new “best practices” standards in 2015 citing an “over-reliance” on what is commonly referred to as “dynamic entry” techniques.

“They have realized we're losing a lot of guys,” said Greg Benson, a veteran member of the Kearney unit. “What we're doing is not that safe.”

The old-school approach had been drilled into Benson. “For the last seven, eight years we have used a tactic of dynamic entry,” he explained. “Speed, surprise, violence and action. That's kind of the verbiage that we used.

“As we hit that door, ‘boom,’ we were coming in and trying to dominate this structure as quickly and safely as we could.”

The police officers, loud and intimidating in military-style uniforms, would force their way in behind bulletproof shields. After using a battering ram on the door, small, very loud concussion grenades called “flash-bangs” would be rolled through the opening.

“Boom,” whispers Benson, pantomiming a small explosion. It’s designed to “just to rattle this guy's cage a little bit in his mind (and say) ‘What the heck was that?’”

As quickly as possible the unit would speed through the structure, forcing anyone inside to the floor.

“You're moving fast because the idea is you want to just get to the bad guy,” he explained.

“I think peaceful resolution is much more of a goal now,” Kerby said.

The fast-moving “dynamic entry” has not been eliminated, since in certain high-pressure instances it still has value. More and more tactical officers see it only as one of several options.

At a recent training session, the Kearney SWAT team drilled the tactics designed to give officers more time to assess the potential hazards and leave a comfortable distance between police and the bad guy.

In one practice scenario, the nine-member force lined up outside a building at the Kearney Fire Department Training Center. After shouting commands to the volunteer “bad guy” inside, the team drilled how it would eventually surround and subdue the man with his hands up.

It’s the most optimistic of outcomes, but a recognition that at times simply showing up in full gear can persuade people to turn themselves in.

In a second approach, known as breach and hold, the team approached the training building, announced they were in place to the occupants inside and “breached” the door with a battering ram.

The team leader immediately asks people inside to enter the hallway with hands up.

The goal is to get inside and orient the team to its surroundings.

“Let's not rush into an unknown house for a lone suspect and get cops killed,” Benson said. “Let's think about our tactics.”

Instead of rushing into rooms where there may be people with guns, the team will wait for the occupants to reveal themselves and draw them towards the officers.

By slowing things down, it “allows you more time to think and to process what you are seeing and what you're doing.”

“You got to think about it. When you respond to incidents that are very commonplace across the United States now, it's not uncommon for law enforcement to be outgunned,” Kerby noted. “The less likelihood you are to have to use higher levels of force, it's just best for everybody involved.”

The shift in philosophy grew out of the combat theaters in Iraq and Afghanistan. Combat teams in cities and towns routinely faced circumstances where they did not know what they would face inside homes and businesses. New tactics evolved around this type of urban warfare.

Harshbarger was among the civilian SWAT commanders who began hearing from the veterans being recruited as police officers.

“I think we had a lot of military personnel coming back and saying "Hey, you know what? There's a safer way to be doing this. We're doing it overseas. Why don't you guys try giving it a try?"

It was also not an easy transition for those tactical officers schooled for years in the more aggressive techniques.

“I saw the team was hesitant about it,” he told a training class recently.

“I think to some degree our egos get in the way,” he told his team. “It’s hard for me as a team commander to say ‘let’s pull back and take a look at what we’re doing here and change it.’”

“Why dive a team into a house or a building where the person might be possibly armed, (just) for drugs? Why not try a little bit safer approach?” Harshbarger said. “A more controlled environment is what we’re looking for.”