What do people know about Shawn Eichorst, the new athletic director at the University of Nebraska-Lincoln? Not much. As he takes on one of the highest profile jobs in the state, we learn more about the man in charge of Husker athletics.

The University of Nebraska-Lincoln introduced its choice for athletic director, Shawn Eichorst, just eight days after Tom Osborne announced he would leave the job. The reaction from most Nebraskans: “Who’s that?” They are starting to learn a little more.

Appearing on the NET Sports program Big Red Wrap Up recently, Eichorst was asked about his life story. “It’s a pretty short story,” Eichorst replied. “I’m from the Midwest. I’m from southwest of Madison, Wisconsin. Grew up on a farm. Had the great good fortune to participate in sports. Football in college. I just kind of made my way.”

Making his way meant having a successful run as defensive end on the University of Wisconsin-Whitewater football team. He was team captain and made the all-conference team.

He studied sports law at Marquette University and after graduation worked as an attorney in Milwaukee. 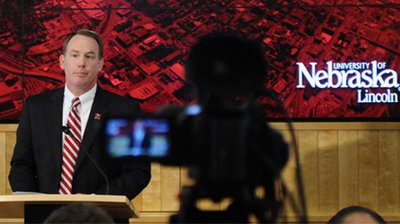 In 1999 UW-Whitewater brought him back to be director of athletics. He quickly moved through the athletic departments of four different universities in 13 years including University of South Carolina, University of Wisconsin, and University of Miami. He left the last job during an on-going NCAA investigation into allegations football program boosters provided illegal favors to players. No sanctions have been announced but just a few weeks after Eichorst left the job, Miami voluntarily took itself

out of contention for bowl games

for the next two years. There are no indications Eichorst was involved in the potential scandal.

While Eichorst is not a brand name in Nebraska, Kevin Kugler, the host of NET’s Big Red Wrap Up and a Big Ten Network sportscaster, called the new AD “energetic” and says his reputation is solid.

“He has a track record as being a guy who does not want to be in the spotlight but rather behind the scenes.”

Eichorst has one important link to the Husker football team that may have served him well while seeking his latest job. During his service at the University of Wisconsin he worked with then football coach Barry Alvarez, a former Husker linebacker from the Devaney era. Alveraz is reported to have recommended Eichorst for the Nebraska job.

Alverez told the Omaha World-Herald Eichorst is “very bright. He knows athletics, understands coaches and athletes. He's a guy that works extremely hard, gets along great with people."

Kugler thinks that will serve the new AD well, since “he seems to have a pretty good idea as to the relationship of Nebraska Athletics to the fans and the people of this state.”

The appointment of a new athletic director comes at a pivotal moment for the state’s largest athletic program and its most visible institution. UNL’s move to an expanding Big Ten conference changed the dynamic and revenue potential for the school’s major sports.

In addition, the Osborne era leaves behind upgraded or brand new stadiums and arenas.

Millions have been spent expanding Memorial Stadium, providing new practice facilities for softball and baseball, support for the Pinnacle Bank arena in downtown Lincoln as a basketball venue and moving the popular women’s volleyball games to the Devaney Center.

With so much accomplished by Osborne, Kugler still believes “the expectations are significant” for Eichorst and university administrators will expect to see results in every major sport.

“You have to maintain or improve the revenue generated by the football program. You have to continue the process of (building an audience for) basketball. The men’s side especially should make money and it should make good money. Baseball’s made money or at least come close to making money in the past. Volleyball has the potential for greater revenue now that it’s going into the Bob Devaney Sports Center.”

Kugler added Eichorst also must “figure out a way to maximize the revenue of the other sports.”

Eichorst’s low-key personality may be an important part of his potential to succeed. Prior to Osborne, Nebraska seemed to agree what type of athletic director it didn’t want. From 2002 through 2007, Steve Pederson’s abrasive style put off fans, media, and athletic department staff and cost him his job.

In contrast, Eichorst told sports writers at his first UNL news conference if everything is going right under his leadership, Nebraskans should barely know his name.

“My personality is a little bit lower key, but that doesn’t mean there isn’t a tremendous fire in my belly. That will be more my approach,” Eichorst told the panel on Big Red Wrap Up.

“I think he’s going to come in and take a wait and see attitude and I think that’s a good thing,” Kugler said. “A pragmatic attitude towards being the athletic director is important. We’ve see an athletic director come in before and try to make his stamp on a program and it rubbed a lot people the wrong way and that’s not something that Shawn Eichorst can do, nor do I think that he’s going to do.”

The end of this particular football season provides an interesting early test for the new athletic director. His first full official day on the job is January 1, 2013, the same day Nebraska plays Georgia in the Capitol One Bowl. It is a game fans hope will redeem the Huskers after an embarrassing, confidence-shaking loss in the Big Ten title game to Wisconsin on national television. (Score: Wisconsin 70, Nebraska 31) The defeat dashed hopes for a Rose Bowl appearance.

Even as fans and sports writers howl, Kugler doesn’t feel one bad game will change Eichorst’s approach to the football program or the coach.

“As a guy who played football and Shawn Eichorst played football, I think he’s got an understanding of a bigger picture,” Kugler said. “Eichorst has the perspective needed to say, ‘Alright, that’s one miserable loss, but let’s not take a pick axe to the entire program and chop it up because of one ugly loss.’ I don’t get the sense that Bo Pelini has anything to worry about and Bo shouldn’t.”

Eichorst granted his interview to Big Red Wrap-Up just days before the Wisconsin defeat. He was asked where the football team would be headed under his administration.

“Right where it’s at now,” he replied “We are right in the thick of things. We control our own destiny. We have an extremely bright, capable head football coach who has as much passion for Nebraska football as anyone. We play the game the right way on the field, in my view. So I hope to just step in and keep that thing moving forward.”

Eichorst has said little so far about whether there will be changes in any other Husker sports program or if any sports will be added or dropped. He did reveal his exit interviews with Osborne concentrated on long-term planning, in which the two “started strategically to talk about at all the sports units within the department and his perspectives and in the next couple of weeks we’ll pace that up a little bit.”

There may be no tougher burden for Eichorst than simply working in the very, very long shadow of Tom Osborne.

“I’ll be the first to tell you I’m not going to be Coach Tom Osborne,” Eichorst said. “That’s not who I am. I have to be who I am. That’s not to say I don’t have great respect for everything he stands for.”

Kugler added the fans in Nebraska, with their high expectations and love of good old days, should remain realistic.

“To say Shawn Eichorst can be (Tom Osborne) is putting way too much on this guy. If that’s the expectation fans have they’re going to be sorely disappointed. He can’t be that guy. He’s got to be Shawn Eichorst and I’m anxious to see what that entails as an athletic director.”