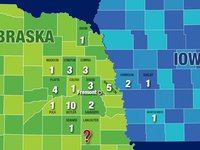 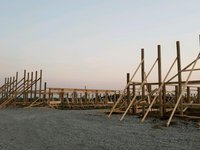 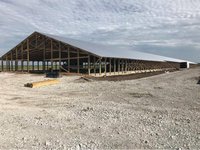 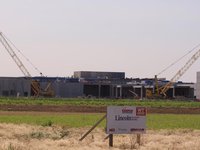 As warehouse giant Costco builds a huge chicken plant in Fremont, Nebraska, a proposal for four large chicken barns in Lancaster County has some residents upset. The controversy is one skirmish in a much larger battle over the Costco project, and the change it represents.

Ruth June drives along the gravel road near her farm in southwest Lancaster County, about five miles from Crete. She and her late husband Glen – everybody called him Bob – moved here in 1962. 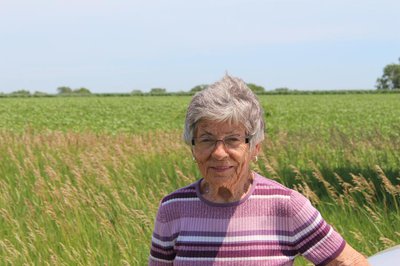 Ruth June stands on her property. Chicken barns could be built around the tree line in the background (Photo by Fred Knapp, NET News)

June points out the 120 black walnut trees she planted, and the birds that come to visit near her pond.

“For about last 10 years we’ve had a pair of geese, and this year there was seven of them, and they had 15 babies,” she exclaimed. “They just flew away about three weeks ago. I think they knew the heat was coming.”

June thinks they’re the same ones as in previous years, “‘cause they go to same tree where I feed ‘em under.”

But June’s afraid this tranquil scene may soon be disturbed.

“This is a nice quite neighborhood. Nice people. Everybody gets along,” she said. “Now, we’re going to be shut up in our houses because we can’t stand the smell outside?”

What June’s afraid of are different birds: chickens, nearly 200,000 of them, that could be housed in four 600 foot-long barns half a mile from her house. The chickens would be grown to supply the Costco plant being built in Fremont, scheduled to start running in September 2019 and eventually process more than 2 million birds a week.

Randy Essink of nearby Cortland bought the property near June’s house and would run the operation. Essink says he’s never done anything like this before. He hopes it’ll let him leave his day job, installing passenger elevators on construction projects, and move into farming full time.

“I would be considered a hobby farmer and I can’t financially make enough off farming to do it full time, so that’s why I work full time’ Essink said. "This is going to enable me to work from home and still farm and stuff. I got a passion for that, but not for my day job.” 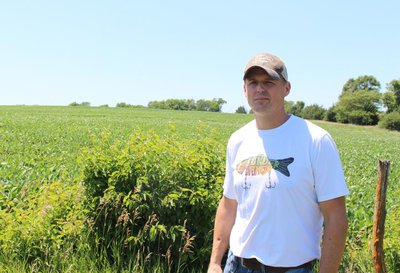 Randy Essink stands on his farm. Poultry barns would be built on rise in background. (Photo by Fred Knapp, NET News)

But first, the Lincoln-Lancaster County Planning Commission has to approve the project. In advance of a hearing Wednesday (July 18), the county has received 100 emails opposing the project, on grounds ranging from fear of air and water pollution, to concerns with traffic from trucks hauling chicken and feed, to effects on property values. There’s also been one letter of support.

The planning commission staff has recommended approval, saying the proposal is an agricultural use and few houses would be impacted.

Essink says he has good reason to run the chicken barns well, because he plans to move to the site with his 18-month old son and his fiancée.

“Anything that would be detrimental healthwise to me or my son or my fiancée I would never do anything like that – or my neighbors for that matter,” he said.

If the project’s approved, Essink would become one of an estimated 125 growers in 14 Nebraska counties, and several in Iowa, who would supply chickens for Costco through an intermediary called Lincoln Premium Poultry.

Lincoln Premium Poultry’s Jessica Kolterman acknowledges many people have concerns about large chicken-raising operations. But Kolterman says a lot of those concerns come from people finding negative information on the internet that reflects the way poultry barns were built and operated 20 or 30 years ago.

“There’s different kinds of barns. A lot of barns don’t have the solid sidewall like ours do. A lot of them have different practices than the practices we’re using,” she said.

But Ken Tesar, who grew up on the farm Essink bought and still farms in the area, is skeptical. 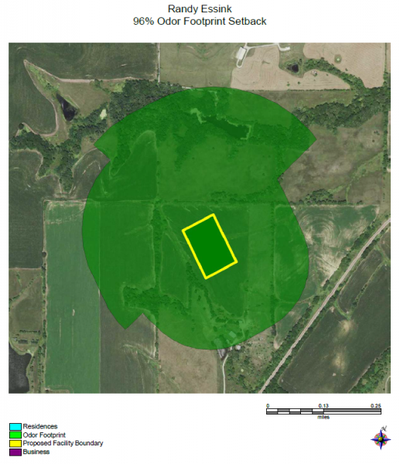 Costco says this study shows where odor from proposed barns would be limited to 96 percent of the time (Source: Lincoln Premium Poultry)

Kolterman thinks there’s more concern about things like odors in places like Washington and Lancaster counties, because more people who aren’t familiar with agriculture live there on acreages.

“I’m not going to sit here and tell you you’re never going to have a smell ever in the course of this operation. It’s a farm. If you live in the country, you do have smell from time to time, whether it’s cattle, whether it’s hogs, whether it’s grain as part of the harvest. That’s just the nature of agriculture,” Kolterman said.

Curt McConnell lives on an acreage he bought 19 years ago, and built a house that’s less than half a mile from where the Lancaster County barns would be built. McConnell says he’s not opposed to agriculture.

“We have two dozen cows just across the road that my neighbor grazes. I’m fine. They were here before I was here, and I’m fine with natural farming practices,” he said. 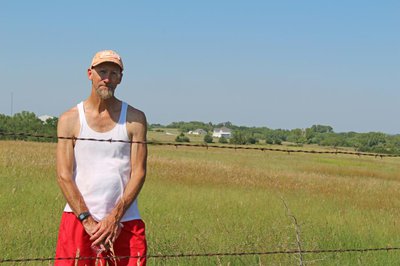 Curt McConnell stands behind the fence marking the property line of a proposed chicken farm. McConnell's house is in the background (Photo by Fred Knapp, NET News)

“If Costco wants to come out and drive down our property values and ruin our way of life, show me the money,” McConnell said.

Kolterman says the project will help farmers and others, and the people involved doesn’t want any negative effects for neighbors.

“What we’re trying to do is put as many practices in place to mitigate as much of it as possible,” she said. “And Randy, like all our other growers, are going to do their best to be good neighbors and good stewards of the land."

“You know, I try to keep an open mind. I just know that sometimes it’s better to stop a problem before it happens than to try to clean it up,” he said.

Even if the planning commission approves the project, that decision can be appealed. And it’s a conflict that may be repeated elsewhere, as the Costco project moves ahead.