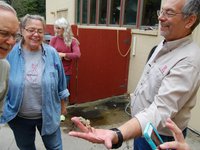 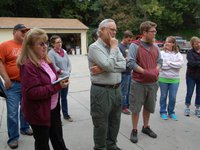 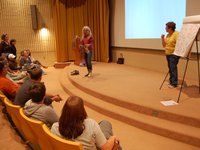 For the last six years, conservation work in Nebraska has received help from a growing force of motivated volunteers known as Nebraska Master Naturalists.

On a Saturday afternoon at Schramm Park State Rec Area east of Lincoln, Dennis Ferraro leads a group of about 20 people outside. “I have fifty tree frog monitoring refugia, for my students to check what the populations are doing right here at Schramm Park,” he explains. “Let’s see if we have any in the traps.”

Ferraro is herpetologist and professor at the University of Nebraska-Lincoln. He shows the group a small piece of plastic pipe with holes drilled in it, describing how tree frogs seek out damp spots like these to hide. The first one he checks is empty. But after looking in the second, he exclaims, “Look what we have in here!” to the excited crowd.

Ferraro holds the green and gray frog aloft so everyone can get a good look. Ferraro is teaching this group about Nebraska’s animals—particularly reptiles and amphibians. The group is master naturalists in training. Ferraro helped start the program a decade ago.

“It came about trying to get a number of people within the state enthused about and to be proactive about conservation of at-risk species, water quality, air quality, waste management, a lot of different things that we need as conservation with the state of Nebraska,” Ferraro said. “We also wanted to promote ecotourism.”

Similar programs already existed in about 20 other states. With help and funding from the Game and Parks Commission, University of Nebraska and Nebraska Environmental Trust, Ferraro said they created a program with a distinctly Nebraska focus, including a focus on land stewardship, because so much land in the state is privately owned. 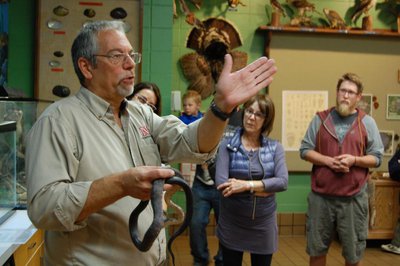 “So we made sure ours had a component where people could actually do things on their own property, or get organizations within the state of private landowners to do conservation or water quality on their own lands,” Ferraro said. Another key part of the training is geared toward citizen science.

“It could be as simple as counting birds or looking at butterflies or doing water tests in a creek that runs through their property,” Ferraro explained. “By doing this, they're getting data to scientists that is critical for conservation. But also it gives the people doing the citizen science a connection.”

Ferraro said citizen science increases the amount of research and data collection beyond what he and other scientists can typically afford. He estimates that volunteers have saved the state roughly one million dollars in conservation work in the last six years. Kristal Stoner with the Nebraska Game and Parks Commission said the same is true of the state agency. Master naturalists have been essential to projects like the restoration of the endangered salt creek tiger beetle, Stoner said.

“Without folks willing to just go out and check to see if these burrows are still there, see if those small beetles are still down in that mudflat area, then we wouldn't know if this was a good project or not. We wouldn't know if it's worth investing in the future. So having these folks is really critical for this project,” Stoner said. She said she’s been amazed by the power of this growing volunteer force.

“What we’ve found with the Master Naturalist program is there's folks with all kinds of talent, people with these amazing skill sets that you simply don't have within the Game and Parks rank. And they want to help, and they want to be productive, and they want to participate in conservation,” Stoner said.

Paula Hoppe has a degree in wildlife biology but didn’t use it much until she graduated from the first Master Naturalist course in 2010. About 30 miles north of Lincoln, we walk out toward wetlands on the north end of Lake Wanahoo State Recreation area, a place she visits almost daily.

“You can see muskrat lodges out there, lot of mink, beaver, we've got coyote, deer, it's exciting to just spend time out here,” Hoppe said. She observes nearby bald eagle nests for the Nebraska Game and Parks Commission. She’s also organized a birding club, helped create a Nebraska Naturalist calendar, and gives talks to area groups, encouraging others to get outside 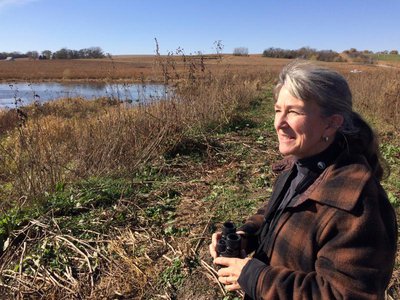 “One of the things I've learned through the Master Naturalist program is the importance of partnerships,” Hoppe said. Many master naturalists don’t have a background in biology or science, but want to work outside, with a purpose. The training helps them gain added confidence, Hoppe said.

“I don't think I would have been brave enough to pursue those endeavors without those individuals behind encouraging me,” Hoppe said.

Back at the training at Schramm Park, Suzanne Hasiak of Bellevue agrees. She volunteers with several local organizations, including the Henry Doorly Zoo and Fontanelle Forest.

“I guess that was part of the reason for doing master naturalist was to kind of give me the credentials that kind of go along with everything I'm already doing,” Hasiak said.

The training requires 60 hours to complete and costs about 250 dollars. As a transplanted Californian, Hasiak says she was drawn to the Nebraska-specific information in the training.

“I feel like a sponge cause I just want to learn more about here,” Hasiak said.

David Foster works as a park caretaker in Omaha but would like to make his way into the state or national park service someday.

“So I'm hoping that this could be a step in the right direction to network with the right people to get me in more of that career path,” Foster said. He highlighted another big draw of the master naturalist program—being part of a conservation community.

“The networking that you get to talk to all these different people that have different backgrounds, you get to learn about new ways to be involved with these kind of things and that's ultimately one of the main things that this is good for, getting groups of people together to actually make a difference,” Foster said.