Next week, Nebraska’s newest state poet will be formally introduced at the State Capitol. Matt Mason of Omaha is a poet and author and is executive director of the Nebraska Writers Collective. He replaces Twyla Hansen as State Poet and will serve a five-year renewable term, advocating for poetry and literacy across the state. Mason spoke with NET’s Jack Williams about the challenge ahead.

NET News: First of all, congratulations. How did the selection process go and was this something you had been interested in for a while?

Matt Mason: Thanks. The selection process, it’s a good process. You have to get nominated and then if you’re a finalist, which I was a finalist this time as well as five years ago, you get to come in front of a panel of people I admire and get to talk to them about poetry, so it’s been great.

NET News: How did you discover your love of poetry and kind of turn it into a career? You’ve written some books about poetry, you’re an active poet. How did this all start?

Matt Mason: It’s kind of a lifetime thing of just, in high school, I started writing and I still don’t entirely understand because I didn’t get into the poetry we were reading, but then kept with it, kept writing and then in college had some classes that really opened my eyes, got me energized about poetry and I’ve just kept with it since, because I think it just helps me live a better life by processing things through writing about it.

NET News: What inspires your personal style of poetry? Do you have anybody, a Nebraska poet maybe from the past, Ted Kooser, whoever it might be, that inspires you? 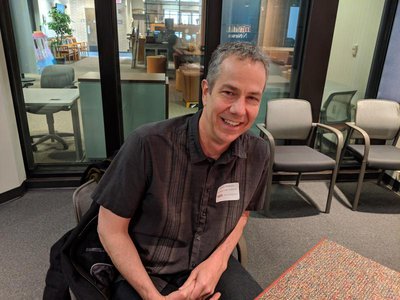 Matt Mason: Oh, there’s a lot of people. There are so many great poets in Nebraska, folks like Greg Kosmicki, Ted Kooser of course, J.V. Brummels, Neil Harrison, Marjorie Saiser, Sarah McKinstry-Brown, so many poets I love. And I think for my own particular style, we all kind of try to write poems that we think poetry is supposed to be, but I want to write poems that I wish poetry was more of. So I started writing poems that were a little bit funny, a little bit strange, a little bit about different issues that I didn’t think were as much poetry. And then of course as I’m doing it, get a little success and find a lot more people doing the same thing. It’s been great.

NET News: In an age when young people have mobile phones, the internet, all sorts of other distractions, how do you keep young people interested in something like poetry. Is it something you have to be very creative when you’re doing that?

Matt Mason: I think when you get some of the mystique stripped away from poetry and show everyone that they can do it, that they will do it and find that they benefit from it. You know, I work with the Louder Than A Bomb: Great Plains Festival. We’re all over the state, and what it does is brings students in who find that writing poems, they’re figuring out the world, they’re saying what’s important to them and they’re finding ways to say it in a powerful way so that people are listening to them. And I think that’s really what poetry can do, is if you can find a way to get people into it by showing them that what they say is important and people will listen to them, it works.

NET News: Why does Nebraska still need a State Poet?

Matt Mason: We really need it because I think you need arts advocates in your communities and especially with poetry, which, we had about an 80-year run I think where poetry was more and more kind of taken into the mystical side where we think that poetry is smarter than us and doesn’t actually have anything to do with us, that we need reminders. We need state poets. Most states in the union have state poets, except for like one or two and it’s important to have that advocate to just keep the energy flowing and keep people interested in it.

NET News: These are five-year terms, you have five years ahead of you, wide-open right now. What kind of challenge is that for you as you embark on this new adventure? Where do you even start? Actually, you’ve already done some things, right?

Matt Mason: Yes, I’ve already started. I’ve been to a few schools and been setting up different things. A lot of people have been contacting me. The hard thing is going to be, I run a non-profit, the Nebraska Writers Collective, and that takes up a lot of time, so we need to figure out some ways to kind of reorganize things at the top a little bit so that I have more time because it’s going to be very important for me to be doing a lot more appearances and travel. You know, what got me into this non-profit is, I love poetry, I love talking to students and then as we got bigger, I had to spend more time with e-mail and spreadsheets and so now I’m excited about going back into classrooms.

NET News: You’ve been named State Poet, but you haven’t actually had the official recognition. When does that happen and what’s going to happen there?

Matt Mason: The official ceremony is Monday, February 25th in the State Capitol in the Warner Chamber, everybody is welcome, come on down, 10 a.m.. And then at some point in Omaha, probably the following weekend, I’m going to have some kind of event with poetry and cake.