In the last three years, electricity generated by wind in Nebraska has more than doubled. And with the Environmental Protection Agency requiring big cuts in future carbon emissions from power plants, even more wind power could be in the state’s future.

Alicia Knapp pilots an SUV down a stretch of gravel locals around O’Neill call “Opportunity Road.”

“When I heard the name ‘Opportunity Road,’ I thought it was named that way ‘cause they put these curves in the road that created opportunities for bringing big things in and out. Turns out it was the name of a town,” Knapp said.

That town – Opportunity, Nebraska -- is long gone. But now, Opportunity Road is about to see a big increase in exactly the kind of traffic Knapp thought it was named for.

“You can see there are some low spots that will need to be filled in with aggregate and smoothed out to make a surface that’s suitable for the large trucks that are going to be bringing in the turbine components,” she said. 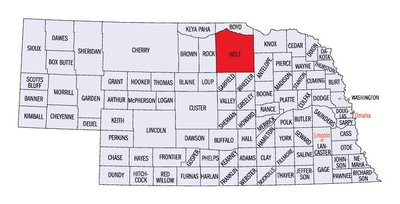 Over the next year, the company Knapp works for – Berkshire Hathaway Energy or BHE Renewables – will upgrade roads and install 200 wind turbines spread over 54,000 acres of farm and pasture land here in Holt County, which stretches from the Sandhills to the Niobrara River.

“We will see the effects here in the city of O’Neill and the surrounding area of O’Neill, with the increased traffic. We’re already seeing an influx of construction workers coming into the community, which is very exciting to see,” Sedlacek said.

At its peak, the project will employ about 350 construction workers. That’s just under 10 percent of O’Neill’s population. Sedlacek says it will be a challenge for them to find places to stay.

“Housing is an issue in rural Nebraska, and so this does definitely add a layer of challenges for those workers,” she said. “We know that O’Neill won‘t be able to house them all, as much as we would like to try, with hotel rooms, rental property, camping spots. We’ve really tried to promote even a two, three-county approach for them to be able to drive into the site and work from around north central Nebraska.”

The project’s supposed to be up and running late next year. After that, BHE estimates there will be 12-15 full-time jobs. The company says it will pay landowners lease payments totaling $2.5 million a year, and there will be about $2 million a year in tax payments to divide between the schools, the county, fire districts and townships.

Bill Tielke, chairman of the Holt County Board of Supervisors, says most people seem to like the project.

“The majority of the people that have talked to me are supportive of it. There’s always going to be a few that oppose it cause of the view and different deals like that. But it’s been real positive from what I’ve gathered so far,” Tielke said. 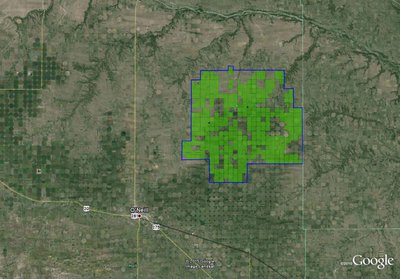 The general area of Holt County where turbines will be built. (Map courtesy of BHE Renewables)

Terry Julesgard is not so positive. He lives alongside the Niobrara River, about half a dozen miles from where the northernmost turbines will be built. Julesgard is afraid they will spoil the beauty of the area.

Back at the Holt County Economic Development office in O’Neill, Sedlacek is focused on a different vision.

“(In) rural Nebraska, we fight the conception of ‘brain drain’ all the time. And this type of project is bringing in clean, renewable energy jobs that takes new technology,” she said. “So we can keep young people and families, or if someone who’s looking for that second career or that change in a career, they have the opportunity to better their family’s income and work in this kind of industry.”

And “this kind of industry” is growing. Grand Prairie and another project are expected to add 500 megawatts of wind power generating capacity to the 812 megawatts Nebraska had at the end of last year. But that’s still just a fraction of the nearly 3,000 megawatts in Kansas, or the nearly 6,000 in Iowa. Earlier this year, Nebraska Energy Office Director David Bracht co-wrote an article that concluded Nebraska could be “the next wind-energy frontier.” (For figures on wind energy in Nebraska, click here.)

Added pressure for development could come from the EPA’s Clean Power Plan. That plan requires Nebraska to cut carbon emissions from electrical power stations by up to 40 percent by 2030. That probably means getting less electricity from coal and more from natural gas, wind, and solar.

Nebraska Attorney General Doug Peterson has joined 14 other states’ attorneys general in challenging the plan. But Tim Burke, president and CEO of the Omaha Public Power District, doesn’t expect the push for lower carbon emissions to be reversed.

“In my 30 years in this industry, I’ve not seen those kinds of changes in environmental or clean air policy essentially go backwards. They may slow down, they may speed up, but very rarely have you seen them go backwards or reverse themselves,” Burke said.

Burke says it would take action by Congress to reverse the policy. Meanwhile OPPD has committed to buying the power produced by the Holt County project for the next 20 years. And the utility says by 2018, it expects one-third of its retail sales to customers will come from renewable energy, mostly wind power.