Nebraska Vaccinations Continue to Lag in Communities of Color

We’ve all heard reports of disparities in vaccine rollout among people of color, but why is there such a disparity in Nebraska, and what is being done to address the problem?

She says that she has already received her first vaccine as part of the state’s 1-B vaccination schedule, which prioritizes people 65 and older.

“It went very well, said Pruitt. “I've received one Moderna and I'm expecting to receive my second one in March.”

Pruitt says that, for her, getting the vaccine as soon as possible was never in question.

“I have autoimmune issues. I'm asthmatic and although I was never a smoker, I also have some COPD,” said Pruitt.

According to the Nebraska Department of Health and Human Services, Pruitt is among nearly 3% of African Americans who have received their first dose of the COVID vaccine, despite African Americans being around 5% of the state’s population. 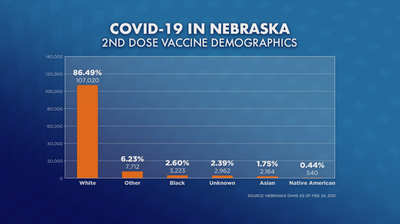 Less than 3% of African Americans have received their second dose of the COVID-19 vaccine, according to Nebraska's Department of Health and Human Services, despite African Americans being around 5% of the state’s population. Joe McMullen, NET.

Lassiter recently appeared with Governor Pete Ricketts during his bi-weekly COVID-19 update to appeal to communities of color to get vaccinated.

He says two factors, history and coordination, are reasons for the lower vaccination numbers among black Nebraskans.

As far as history is concerned, Lassiter points to the infamous Tuskegee experiments.

“And that's where black men who had been tested positively for syphilis were allowed to actually not receive treatment, even though they were told they were receiving treatment, but they were actually being followed or studied in order to determine the long-term effects of untreated syphilis.” said Lassiter, “So many of these men died horrible deaths.”

Pruitt says she has had to personally convince a 90-year-old friend who was skeptical of medicine to get a vaccination.

“Well, she said I've never taken a flu shot, why would I take this,” Pruitt explained.

In the end, Pruitt did convince her friend to take the vaccine.

The disparity among vaccinations is even worse among Hispanics, where only 3.4% have been vaccinated, despite representing about 11% of the state’s population.

Carlos Barcenas is a private consultant in Grand Island who works closely with the Hispanic community and says in addition to a fraught history with medical communities, Hispanics also face additional challenges.

“I think (the) language barrier continues to be something that many places are getting better at, but sometimes I'm amazed and surprised. I've been here since 1994, twenty plus years and you know, my thought would have been that some places we have been doing bilingual information sharing 5-10 years ago, but sometimes I'm just surprised that we're just getting started," said Barcenas.

Department of Health and Human Services CEO Dennett Smith knows there are significant challenges in reaching communities of color.

As a woman of color herself with co-morbidities, Smith says she was raised to be skeptical of medical communities, but notes times have changed, and the pandemic leaves no time for hesitation.

“Medicine today is very different than it was 20-30 years ago,” says Smith. “We still have accessibility problems and I can tell you that the department is working with providers on that, but I think the mistrust is something that we have to work through. It is a life or death issue for people, people of color.”

She says the state is doing its part to make sure information is available through a combination of in-person, town hall meetings as well as traditional mediums like the internet and in languages that reflect the communities.

Lassiter says that is well and good, but for those older black people who may not have access to the internet or don’t watch television, there is always the church.

He says he will continue to use his position to preach the good word of COVID-19 vaccines as well as to dispel misinformation.

Pruitt is a member of Mt. Moriah where Lassiter preaches.

Pruitt says she was notified to sign-up for the vaccine from a member of the church’s health ministry.

She says that the same person is volunteering to drive parishioners to vaccine sites.