Only a few hundred cars in Nebraska are fully electric, but the number is on the rise—along with the number of places those cars can charge up. Some Nebraska towns are hoping that makes it easier for electric car drivers to leave town.

In a Hyvee parking lot in north Lincoln, a deep-blue electric car gleams next to a row of red and white Tesla charging stations. After plugging in his Model S, Telsa aficionado Don Cox and I sit in the car to talk out of the wind. He points to the touch screen display on the dash.

“This charging screen tells us the number of miles that the cars thinks it has charge, the charge in the battery, tells us the charging power,” Cox says.

When the battery is near full, I ask him if we can take the car for a quick spin. Cox agrees, but to my surprise, insists we switch seats. 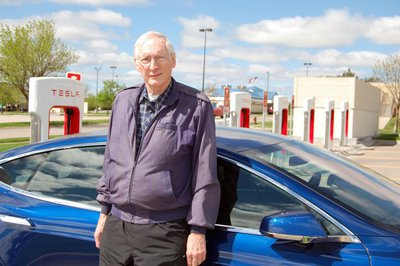 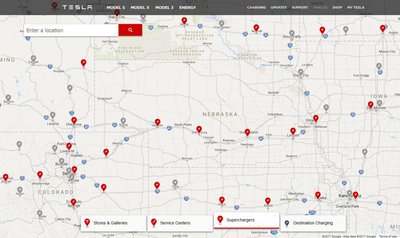 Tesla enthusiast Don Cox stands with his Model S next to the new supercharger station in north Lincoln.

"You can drive from coast to coast on I-70, I-90, I-40, most of I-80 and most of I-10," with the supercharger network, Cox says. But only if you drive a Tesla--other electric vehicles aren't compatible with their systems. By contrast, the ChargePoint stations being installed by communities around Nebraska work for any electric vehicle, including Teslas.

There’s no sound when the car turns on. After putting it in gear, I take the wheel and drive out onto the street. Cox tells me to put the pedal to the metal so I can feel the torque of the engine. The Telsa surges forward, and I let out a little woop of excitement.

“You’re beginning to have the experience everybody has with an electric car,” Cox says.

“You get used to it and it feels pretty comfortable and then away you go,” he says with a laugh.

Cox estimates thousands of people have been behind the wheels of his Teslas, including students of an electric vehicle class he teaches at UNL. He’s on a mission to share the gospel of electrified transportation. He thinks he had the first Model S in Lincoln.

“In the early days we were able to keep track of who had them and where they were,” Cox says. “No more.”

Last year, the Model S was the best-selling electric vehicle in the country. The Lincoln supercharger station is a sign of that change. It’s one of four Tesla has installed along Nebraska’s I-80 corridor in the last few months—with others in Grand Island, Gothenburg, and Ogallala. With that network, and the car’s 200 to 300 mile range, Cox says long-distance travel is easy.

Most people who have electric cars most of the time charge at home in their garage, Cox says. “It's more convenient.”

For Teslas, limited driving range may be a thing of the past. But Teslas are at the top-end of electric vehicle (EV) world. They’re expensive and high-tech, with exclusive chargers. EV advocates like Anne McCollister say if you want to make electric vehicles mainstream, you also need public chargers for more-affordable cars that have a shorter driving range.

Anne McCollister is another evangelist for electric cars. In 2014 she helped found the Nebraska Community Energy Alliance, which promotes technologies that save energy and money and reduce carbon emissions. 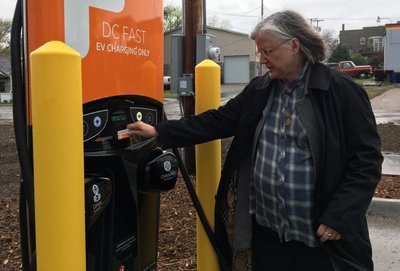 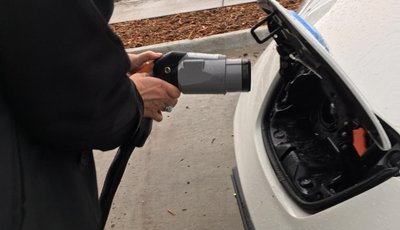 Most charging stations take 4 to 6 hours to refuel a car. That’s fine during the workday or overnight, but tough for roadtrips. In March, the city of Ashland installed the state’s first high-speed DC charger. On a rainy morning in Ashland, McCollister opens the hood of her Nissan Leaf.

McCollister says her electric car gets more than three times the mileage she’d get spending the same amount of money on gas. After swiping a card, she plugs the charger into her car.

With funding from the Nebraska Environmental Trust, McCollister’s group has helped 27 communities and partners around the state install electric car charging stations. Some are rural, smaller towns like Holdrege, Central City, and Wayne—important for drivers who travel off the interstate.

Nationally, electric car sales have grown rapidly in the last five years, and McCollister says, “The cities and towns that are involved in the alliance see no reason why Nebraska should lag behind.”

Several cities also bought an electric car, which McCollister says helps more people understand the technology at the local level, “get butts in seats, hands on wheels and give people that experience and have folks talk about how important it is to their community to really modernize their transportation.”

As of February 2017, the participating communities have saved a combined total of:

Ashland City Administrator Jessica Quady says the city council decided to install the high-speed charger for one main reason: economic development. Given Ashland’s location between Lincoln and Omaha, Quady says they want to encourage drivers to stop and fuel up on the way.

“We have wineries in town, we have art galleries in town. We wanted to have the infrastructure in place for people who do have EVs to be able to come and charge while they're here,” Quady says.

Data collected from the charging stations show that so far, the network has saved carbon emissions equivalent to taking 13 passenger vehicles off the road for a year, and saved electric vehicle owners about $17,000 combined. McCollister expects those savings to grow. Her group is working to map out strategic locations for even more charging stations.

“We want to be sure that the charging infrastructure that it built, is built where the traffic is. And where the need is,” McCollister says.

And electric car sales look like they’ll continue to rise. More than 370,000 orders have already been placed for Tesla’s next car, the more affordable Model 3, which won’t even hit the road until late this year.