The tech sector in Lincoln and elsewhere in Nebraska is booming, and some companies are having a hard time attracting employees. There are some reasons why, and things being done about it.

It’s getting on towards evening, and in an auditorium full of computer science and other students at the University of Nebraska-Lincoln, there’s kind of a job fair going on – with a twist.

“This is like a red carpet for you to look at opportunities where you can start your career. How cool is that?” one speaker says.

Another uses jargon to describe what goes on at his company.

A third talks about how well interns are treated.

“There’s probably a couple hundred job openings in Lincoln for people that have software development skills. Now most of those jobs are probably at larger companies in Lincoln, but I’m pretty confident that most even smaller companies probably have some openings for positions like that. So that makes it really tough for some of these companies to grow,” Durham said.

UNL enrolls a growing number of computer science and engineering majors – 84 graduated last year, a number projected to double over the next four years. But Rich Claussen of the Prosper Lincoln economic development organization says there's a problem.

“They leave. A lot of them leave," Claussen said. "A lot of them stay here as well. But you have to I think ask the question ‘why are they leaving?’ And if they’re leaving because they don’t realize there are opportunities here where they can start their career, then that’s a problem.”

That’s what events like the reverse pitch, by local companies ranging from established insurance firms with computer jobs to tech startups, is designed to combat. 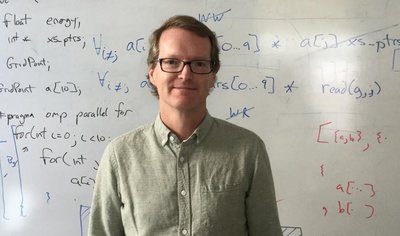 Matt Dwyer, chairman of UNL’s department of computer science and engineering, says there are a couple of reasons to expose students to local companies.

“One is to try and draw on their expertise to enrich the educational environment for the students. But the second thing is to expose students to the idea that there are great career opportunities here in Nebraska and they don’t have to go to Seattle or the Bay Area or the East Coast,” Dwyer said.

At least two factors could affect students’ decisions: money and culture. Hank Robinson, director of the Office of Institutional Effectiveness at the University of Nebraska at Omaha says the median pay for software developers and programmers in Lincoln last year was just under $33 an hour. That’s high compared to the median pay in many other fields. But it’s $7 an hour less than for comparable jobs in Omaha, $9 less than Kansas City, and $13 less than nationwide, according to consulting firm EMSI.

Dwyer says higher salaries in Seattle or Silicon Valley sound attractive, but don’t account for the much higher cost of living.

“Students say, ‘I’ll go out there and I’ll get $110K for my starting salary. But you’re not living very well off of $110K there. If you could get $70K in Lincoln, you’d be living probably a better quality of life,” he said.

But UNO’s Robinson says a higher cost of living may not be a deterrent.

“Where’s the center of the software universe? Seattle. Or Silicon Valley. And you’ll say, ‘I started at $110,000.’ That’s a pretty good place to start the salary that you’re getting paid when you start applying for those next jobs,” Robinson said. “And I wouldn’t discount the going to Kansas City or going to Oklahoma City or going to Minneapolis. They’re a little bit bigger population centers. They’re different connections. They’re $10-$12 an hour more. They may be the step up to the Seattle or Silicon Valley or to the Austin, Texas.”

On the other hand, Durham argues lower starting salaries in Lincoln may make the city a more favorable place for startup businesses.

And then there’s the matter of contrasting cultures. Dwyer says the workplace in tech centers on the West Coast can be all-consuming.

“Google’s famous for, you know, free food. If you want you’re laundry done, they have laundry there. You want to exercise? You don’t have to leave. You just exercise there. So if you’re a single person, actually a huge percentage of your social life and the logistics of living are going to revolve around being in that place,” he said.

Dwyer contrasts that with the situation for graduates who stay in Nebraska.

“The local companies here in Lincoln don’t seem to be building that same kind of ecosystem. And that’s because I think people want to have like a normal life. They want to be able to go home and make dinner and visit with their friends and go to a football game and all that. And I think that, long term that’s healthy,” Dwyer said.

Jake Litle-Smith, a student who attended the reverse pitch, says his friends are split on whether they’d like to stay after they graduate, or work elsewhere.

“It’s about half and half. There’s people who are familiar with Nebraska’s culture and they can‘t see themselves anywhere else. And then there’s people that they’re open to new experiences and they want to go out to the high-end jobs out on the coasts,” Litle-Smith said.

Tipping that balance, or convincing those who leave there are opportunities waiting for them if they come back, could have a big effect on the future of Nebraska’s tech sector.