The Environmental Protection Agency says electronic waste is the fastest-growing component of the waste stream. Electronics often contain hazardous materials which could pose health risks if they leach into groundwater. But one Nebraska researcher says the day may come when throwing your phone or TV away won’t impact the environment at all. 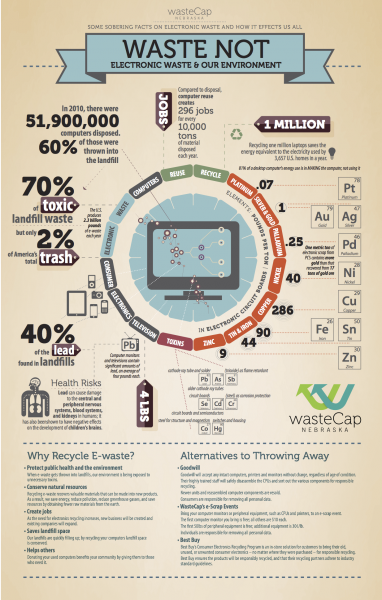 This infographic by WasteCap Nebraska explains the e-waste problem.

Nebraskans produce a lot of waste. In 2010, we sent more than two million tons of material to landfills. While most of that is food waste, electronics accounted for around 7,500 tons.

Carrie Hakenkamp is the executive director of WasteCap Nebraska, a non-profit which helps businesses and communities implement more eco-friendly practices. 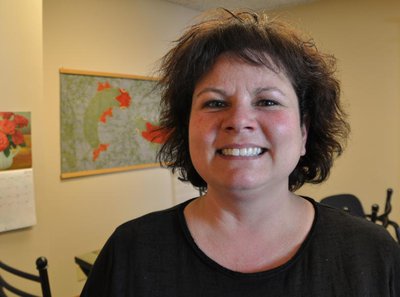 Carrie Hakenkamp, the executive director of WasteCap Nebraska, says electronic waste is a growing problem in Nebraska, where there are no laws preventing consumers from tossing old electronics directly into the garbage. However, Hakenkamp says businesses in Nebraska are prohibited from throwing away old electronic devices. (Photo by Ryan Robertson, NET News) 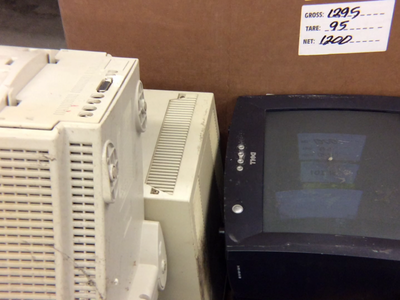 Cathode ray tube (CRT) monitors like these can contain between four and eight pounds of lead, which is an extremely hazardous material. Hakenkamp says Nebraskans have an estimated 30,000 tons of e-waste like this in storage. (Photo by Ryan Robertson, NET News)

Hakenkamp says throwing away old electronics when they could be recycled is not only costly and wasteful, but potentially dangerous.

Take for instance a cathode ray tube (CRT) monitor. CRT monitors are those large, bulky computer and TV screens that were so popular before flat-screen designs became the norm.

Just one CRT monitor contains between four and eight pounds of lead, which is highly toxic.

“We don’t know when landfills will leak, but we know that nothing is full-proof, and that eventually those liners may leak,” Hakenkamp said, “and the more that we can keep out of our landfills to keep it out of our food supply, out of our drinking water supply the safer we are."

Many states now require residents to recycle their old electronic devices instead of throwing them away, but there is no law in Nebraska that says you can’t toss your old TV in with the weekly garbage.

And many recyclers in Nebraska charge a fee to handle certain electronics, but not all.

Goodwill Industries in Lincoln has accepted electronic donations free of charge since 2011. The items are sent to the specialty electronics store, where the facility’s store-room is filled with large boxes on wooden pallets.

“You have your computer accessories, the laptops, keyboards, speakers, mouses, and then you have all the innards of your computer, so your hard drives and all the different hardware that goes with them—we like to separate them out,” said Amanda Hamilton, Lincoln Goodwill’s communications director.

Hamilton said Lincoln Goodwill is in a recycling partnership with Dell Computers, which has very strict guidelines on how items are to be handled. So whatever can’t be refurbished and resold, is recycled.

So far, Hamilton said Lincoln Goodwill has diverted more than one million pounds of waste from area landfills.

But the day is coming when throwing your old TV or phone into the trash may not have a negative impact on the environment…at least that’s the hope of Jinsong Huang, an assistant professor of mechanical and materials engineering at the University of Nebraska-Lincoln.

From his lab on the UNL campus, Huang is leading a team that’s developing organic transparent transistors--which means he’s found a way to use natural materials to make electronic screens -- screens that could go into computers, TV’s, phones, and more.

Huang said using organics to create electronics naturally makes them more environmentally friendly, but that’s not the only benefit. 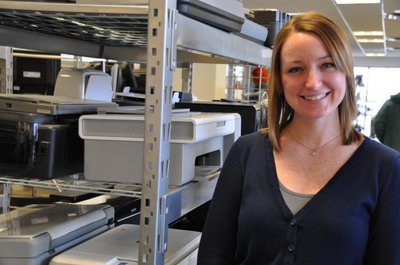 Amanda Hamilton, the communications director for Lincoln Goodwill, says the non-profit refurbishes and resells what it can from electronic donations, and recycles the rest. Hamilton says since 2011, Lincoln Goodwill has diverted more than one million pounds of e-waste from the local landfill. (Photo by Ryan Robertson, NET News) 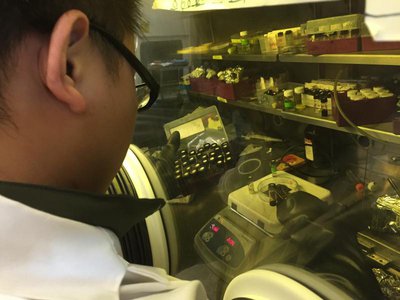 Yuchuan Shao, a third year Ph.D student at the University of Nebraska-Lincoln, creates a small organic transistor in a sealed environment. The case is filled with nitrogen, because humidity may damage the transistors during this process. (Photo by Ryan Robertson, NET News)

“The fabrication process is low cost, because we don’t need to have the high temperature and large vacuum process. We just use low process like the way you print out a newspaper. It’s high output, and it’s fast, and it’s really low cost,” Huang said.

According to Huang, organic transistors are also much more durable than traditional glass and plastic electronics, since the organic components are more flexible.

On his computer, Huang referenced a demonstration video highlighting this benefit. The video showed a standard phone and one made with flexible materials. Both are hit with a hammer. The standard phone shatters, but the flexible phone is unscathed. Even when it’s folded up like a burrito.

“What you see is that mechanically, [the flexible] display is much stronger than this brittle LCD glass-based display. It’s much slimmer and bendable. It’s definitely rollable. You can roll it up into a pen and put it in your pocket,” Huang explained.

Huang said electronic manufacturer Samsung has already expressed interest in his work, and has used some of his innovations in their designs already.

So when can you expect to have biodegradable smartphones and tablet computers?

Huang said he’s not sure since it’s his job to prove a concept can work and it’s the manufacturer’s job to bring it to market. However, Huang said a motivated company could begin producing organic transistors on a large scale in a matter of years, not decades.

Until that day comes, Carrie Hakenkamp from WasteCap Nebraska says the only way to ensure all electronics are kept out of Nebraska’s landfills is through legislation. Hakenkamp says a few years ago, the Nebraska Legislature passed a bill to develop electronic recycling programs in the state, but that bill was vetoed by then-Governor Dave Heineman. Currently, no similar bills have been introduced in the Legislature.