Eleven months ago this week, record floods swept through eastern Nebraska. They caused hundreds of millions of dollars of damage to infrastructure, as well as homes and farmland. The past eleven months have been spent rebuilding, but as spring approaches, there is fear in many communities that warm weather could mean the floods come right back.

Volunteers set out extra folding chairs in the Christensen Field Arena in Fremont. The crowd was bigger than expected. Not enough handouts got printed. Some local residents stood in the back to watch the presentation.

“I knew there would be a lot, because a lot of people were affected. I see some familiar faces as I look around, some I know that were affected,” said Sandy Terry. She came to the National Weather Service flood meeting with her friend Tammy Flittie. Terry said they’re both on the church council at Salem Lutheran Church in Fremont.

“Our church here in Fremont served as a shelter last year and we just want to be prepared if that’s what’s going to happen again,” Terry said. 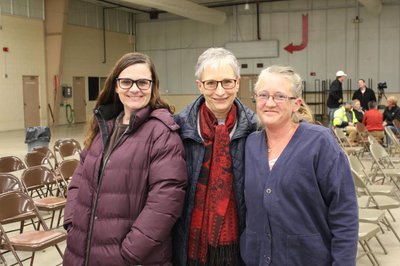 That’s the question that’s brought out so many people on a week night: will this spring bring floods like last year? Flittie is worried the answer might be yes.

“I have been hearing there’s a real chance that it’s going to reoccur," Flittie said. "And quite frankly that’s really frightening, since last year we didn’t know what to anticipate, and if it’s a repeat of last year, that’s going to be scary.”

Tasked with answering the big question was Dave Pearson, service hydrologist for the National Weather Service in Valley, Nebraska. He stood in front of two projector screens, looking out at the massive crowd.

“This talk tonight is a snapshot of right now," Pearson said. "It’s gonna change two weeks from now because we’re going to get different weather. And then by March or when we do have more snow that melts or more rain that comes, there will be updates by then too.”

He started by going through the factors that caused flooding last year: heavy rain on snowpack and deeply frozen soil, ice jams, a long, cold, snowy winter. This information was old for some folks and new for others, but it led into the answer to the big question.

Pearson said in general, the outlook is pretty positive this year. The rivers have less ice. The soil is less frozen. There’s not much snow on the ground in much of the state.

There are some negatives, though. River levels are far higher than normal and soils are very wet. 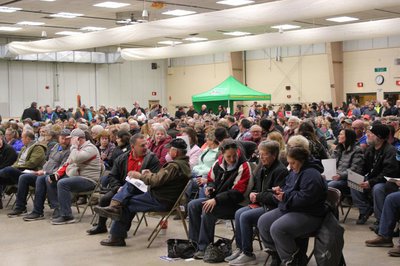 The crowd gathered at the Christensen Field Arena in Fremont. (Photo by Allison Mollenkamp, NET News)

Pearson said there is a greater than usual chance of flooding, but he’s not too concerned for the Fremont area.

“The big thing is, when you walk out the door tonight is to not think ‘well it’s gonna flood for sure,’" Pearson said. "What we know is what we know today.”

That information is good news for Nebraska’s Emergency Management Agency. Bryan Tuma is assistant director there. He said the Army Corps of Engineers is working to mitigate high river levels.

“Normal stream flow or release rates up on the Missouri out of Gavin’s Point’s somewhere between 12,000 and 18,000 cubic feet per second this time of year," Tuma said. "Right now they’ve increased that flow, or those release rates, to about 35,000 cubic feet per second. The winter in the states north of us has been much more severe and they’ve had a lot more precipitation.”

Tuma said runoff from northern states will be above normal, but isn’t expected to be anywhere near the level seen last year. Tuma said one remaining concern is for the damage done to Nebraska’s levees.

“One of the things we want to look at is where do we have levees that might be compromised, or still have some issues, or where there is no longer a levy and would that impact communities or specific areas adjacent to rivers,” Tuma said.

The Corps has been working to repair levies for months, though some repairs likely won’t be completed by spring. Other levees are considered inactive and may go unrepaired.

The prospect of good weather helps to ease some fears in Fremont, but it doesn’t erase the scars of last year’s flooding.

“The children are finding security in the school, because some of them don’t even want to go home, because of just the fear of what can and will happen again," Terry said. "We hear that from one of our members at church who is an elementary teacher. And they’ve had to bring in extra counseling for those students too.”

The fear of more flooding, whether or not it materializes, has put some Nebraskan’s lives on hold. Terry’s friend Flittie said that a year out, the disaster feels ongoing in Fremont.

“We know one individual with our sister church whose brother has housed with her for a year," Flittie said. "She has told him not to finish the repairs on the house until after the spring season in case there is further flooding. So there’s people still homeless, so to speak.”

Flittie said despite those emotional scars, she thinks Fremont could handle another bad year if they had to.

“I believe we’re a strong community," Flittie said. "I believe that we’re here for each other and we can support each other, and I believe that that’s what we’re going to do if this does in fact happen again.”