Imagine Nebraska as the land where major movies are made and big-name directors and producers line up to work here. It’s probably a pipe dream, but there are hundreds of Nebraskans in the movie-making business who would like to make it more of a reality.

It’s not easy to confuse Fremont, Nebraska with Hollywood, but on this day, it’s a possibility. There are cameras, lights and action as Christine Conradt sets up a shot on a quiet residential street.

She’s the writer and director of “12 Days of Giving”, an independent film that’s using Fremont as its main location. Conradt is from Lincoln, but has spent most of her career in Los Angeles. She’s wanted to come home to make a movie in Nebraska for a long time and chose Fremont because it’s one of the only places in the state that offers local film incentives.

“Producers are always looking for new places and new looks and things like that and places that they can make the movie for the budgets that they have,” Conradt said. “Sometimes that’s LA because everyone is just local and there’s no hotel fees, there’s no travel fees and with incentives that help kind of recuperate those costs, I think this will help bring them here. This will at least be an option now for them.” 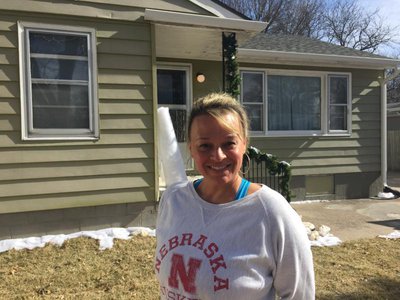 Fremont and Valentine are the only two cities in Nebraska that have taken advantage of economic development legislation, LB 863, passed in 2012. It allows them to use local tax dollars to attract film productions.

“I think the city is really starting to understand the potential of income that can come out of this industry,” Kevin McMahon, who grew-up in Fremont, said. He’s also the location manager for the movie. “I think this production has spent about $80,000 in Fremont just in three weeks and that’s a very small movie, a very small amount, but bigger movies can spend millions.”

Stacy Heatherly is the Eastern Nebraska Film Commissioner and has a small office in Fremont where she does what she can to promote filmmaking. It’s a hard sell for bigger movies, but she’s making progress convincing smaller productions to consider Nebraska.

“Since we started this film production here in Fremont, I’ve gotten calls from our Nebraskans in California saying I’d love to come back home and work on a film,” Healtherly said. “What do we have going on, what do we have coming up, you know, what’s the reality? The reality for us is we would love to bring all those Nebraskans back to Nebraska to work in film production.”

It’s not as if Nebraska hasn’t hosted its share of big Hollywood productions. “Terms of Endearment” was shot mostly in Lincoln in the early 80’s. “To Wong Foo, Thanks for Everything, Julie Newmar” took over the small town of Loma, Nebraska in 1994. Director Alexander Payne, who was born in Omaha, has shot a number of his films here, including “Nebraska” in 2012.

What makes it difficult for more big productions to come here is the lack of a statewide film incentive program. Thirty-seven states offer things like rebates and tax credits to filmmakers, but Nebraska isn’t one of them. It hasn’t been for a lack of effort, though. 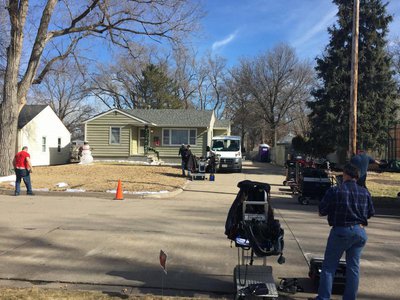 On the set of "12 Days of Giving" in Fremont, Nebraska (Photo by Jack Williams, NET News)

“For the past 16 years, we have had something that’s been within various committees being reviewed and listened to, but it hasn’t taken hold,” Laurie Richards said. She’s Nebraska’s film officer, a job she’s held since 1995.

She understands why lawmakers may not be interested in a statewide incentive. But that hasn’t slowed her efforts to build the film industry in other ways.

“For now, we have a lot of small and independent film pieces that are going on all over the state, not only in the metropolitan area but certainly from Scottsbluff to Hastings and beyond. So, those are all good things. Those are all positive things that can help build the culture that can motivate a greater interest down the road,” Richards said.

In his office at the State Capitol, Senator Jim Smith points out a photo of Clint Howard in the corner. He’s the brother of director Ron Howard and appears in many of his films. Smith likes the idea of big budget movies being shot in Nebraska, but for now, it’ll have to be done without incentives from the state.

“I’m just not certain it’s a sizable enough investment or industry to where we get our money back, and in fact I think that’s one of the concerns that we see nationwide are that, some of these states are saying these credit programs just don’t pay for themselves,” Smith said. “This is just not a sizable enough of an investment to pay for it.”

Back on set in Fremont, Christine Conradt wears a Nebraska sweatshirt as she gets ready to shoot another scene. She knows it won’t be easy to convince big budget producers to come here, but she’s doing her part to boost the film industry in Nebraska.

“It’s budding, and I think it is still an untapped resource and I hope after people see this movie, they’re going to want to know where it was shot and they’re going to say wow, we love that look and it’s going to bring some more production here,” Conradt said.

Her movie, a Christmas-themed film, will likely be released over the holidays later this year.