There are more than a thousand inmates at the Nebraska State Penitentiary in Lincoln and about 20 of them are learning how to use their spoken words to better themselves. It's part a program that’s been around for almost four decades. Toastmasters Club 4362 is a shining light in a prison system that could use some good news.

In a small building down a long walkway from the main entrance of the prison, Lamont Arnold opens a meeting of “The Innovators” with a welcome to visitors. He’s the club’s president and this is his reality two times a month.

Toastmasters Club 4362 isn’t anything new behind these fences. It’s been around since 1980, but for the men here now, it’s a taste of freedom and hope. Arnold, 44, is serving a life sentence. He spent six years in restrictive housing for prison rules violations. Now, he’s a part of three prison clubs and a model inmate. He’s made some progress. 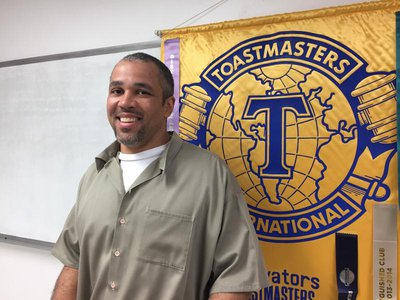 “To come here and not sweat when I get up in front of people, not get choked-up on all my words, not see little black spots when I’m standing at the podium, I’ve come a long way,” Arnold said.

He clearly cares about this part of his life. He gets to the meetings early to greet other inmates as they arrive. He says Toastmasters allows them to express their frustrations and anger in a constructive way.

“A lot of their anger and maybe hurt sometimes comes out as another form,” Arnold said. “I like to be able to tell them that there’s a place they can come and be able to speak to where they can learn that when it’s something emotional, that their larynx doesn’t all close up on them and their eyes don’t get all watery, that they can work through those emotional processes and still be able to communicate their grief or angst constructively.”

Some of the inmates at the meeting are newcomers and nervous. Some just want to watch. When it’s inmate Stephen Schaetzle’s turn to be up front, he’s confident. He’s serving a 14-year sentence and has been a part of Toastmasters for two years. He’s ready with a speech about inmate-run gardens. He thinks public speaking is beneficial in several ways. 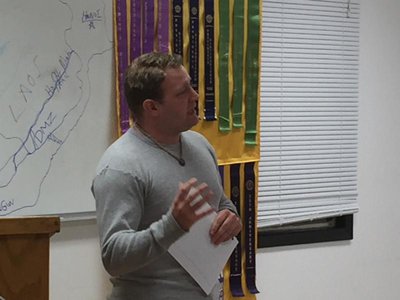 “The most immediate benefit is it gives people practice at speaking at the parole board hearings,” Schaetzle said. ”On the street though, it gives them the ability to work in interviews, instead of being nervous, it will help them relax and be more confident and comfortable because they’ve had this experience of talking in public.”

Visitors to the Toastmasters meetings have to go through an extensive security check and listen as a big metal door locks them in. Phil Rooney knows the feeling well. He’s the outside sponsor of Club 4362 and has been coming to this prison for 16 years. He’s seen transformations take place over the years. Most of these inmates are serious about changing their lives, even if they won’t ever get out of prison.

“Most of them are here with the attitude of great humility and willingness to learn,” Rooney said. ”You get to a point where you build-up a pretty good rapport with them and sometimes it’s easy to forget that they’re even prisoners here, except for the fact that we can leave and they can’t.” 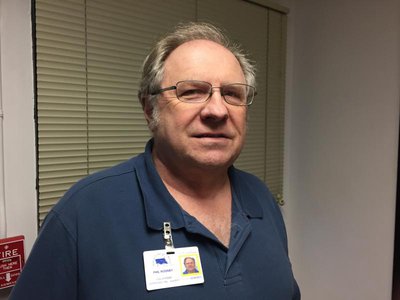 Associate Warden Jason Hurt says the Toastmasters program has been around so long here because it’s effective.

“There’s some lifers in the program that use it as a sense of purpose and to help other inmates get through their incarceration and it gives them a sense of belonging so other inmates don’t come back to prison,” Hurt said.

As inmate Tom Bindel finishes his speech, others sit quietly and take notes. They’ll critique him afterward and give him some pointers on how to become a better speaker. For Innovators president Lamont Arnold, the bottom line is learning how to communicate in a way he would have never thought possible just a few years ago.

“The Toastmasters is where I get to actually sit down and use a format so I can constructively put all the thoughts and all the emotions together and be able to convey them to people around me so they know exactly what I’m trying to say,” Arnold said.

There are similar clubs in other Nebraska prisons, including at the women’s lock-up in York. Clubs that are giving inmates a chance to talk their way to a better future.