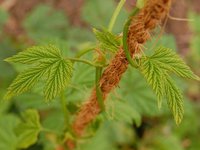 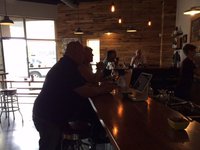 Nebraska isn’t famous for its beer—yet. But there are now more than 25 craft breweries in the state, and several have won major national and international awards. That's led to growing support for craft beer in the Legislature, at the University of Nebraska, and in the field.

On a recent weekday afternoon, people sat chatting over pints of IPA, kolsch and porter at Zipline Brewing Company’s taproom in Lincoln. Now in its fourth year, this brewery is one of several to sprout up across Nebraska in the last decade. Tom Wilmoth is Zipline’s co-founder and current president of the Nebraska Craft Brewers Guild. He said the increasing number of Nebraska craft brewers has begun to collectively focus on elevating their quality and brand.

“Not only are you seeing a growth of the individual number of breweries but the amount and volume of interesting things that are being done is really skyrocketing,” Wilmoth said.

Map of members of the Nebraska Craft Brewers Guild, as of May 2016. (Ariana Brocious, NET News)

But that wave of growth was set to run into a wall in state law, which required a brewery making more than 20,000 barrels a year to get rid of their taprooms or restaurants.

“That's very much equivalent to taking the chimney out of the house so that there's not enough fire to stoke the warmth of the house anymore,” Wilmoth said. “These taprooms really are the foundation on which a lot of craft brewing is built.” 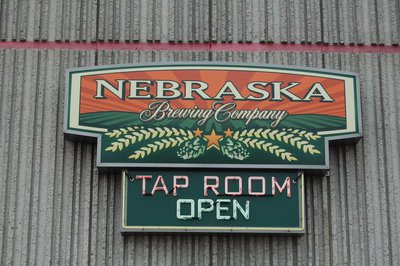 Changing state law to allow breweries to keep their taprooms once they produce more than 20,000 barrels can help other businesses, too, said Tom Wilmoth of Zipline Brewing Company.

"We have a couple of equipment manufacturers who make brewing equipment right here in Lincoln. We also have a number of agricultural producers who are looking to do hop production and maybe some malt growing. So we felt like eliminating that [20,000 barrel] barrier would kind of have this trickle-down effect where, not only the craft brewing industry but all of those industries that support craft brewing would have an opportunity to grow in a way that they couldn't otherwise do," Wilmoth said. 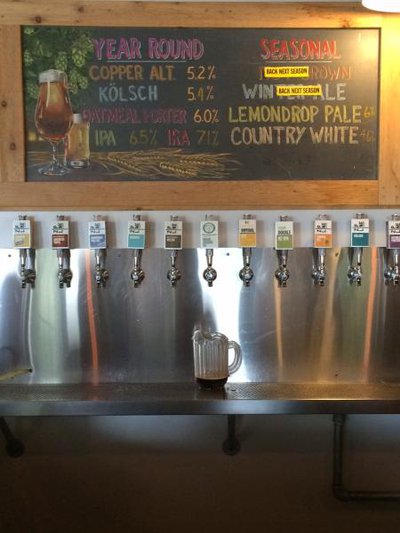 That’s because sales from taprooms and restaurants help fund overall brewery production. While no Nebraska brewery has reached that barrel limit yet, several are on their way, said Hobert Rupe, executive director of the Nebraska Liquor Control Commission.

“And so our issue was making sure that there was a method to transition from a craft brewery license to a full-on production brewery, as well as being able to keep your existing retail restaurants,” Rupe said. A state law to change that rule passed with overwhelming support this spring.

Last year the Legislature passed another measure supporting the craft brewing industry—creating tax credits for brewers who use Nebraska-grown ingredients, like barley or hops. Brewers like Caleb Pollard of Scratchtown Brewing in Ord said they haven’t taken advantage of that mostly because the supply isn’t there yet. But several people are working to change that, including University of Nebraska-Lincoln horticulturalist Stacy Adams.

While he admits he doesn’t drink much beer, Adams knows the importance of the aroma and bittering qualities of hops to brewers. Most U.S. hops are grown in the Pacific Northwest. But in recent years people in other states—including Nebraska—have started growing them. Adams planted a test plot on campus three years ago, and said the Midwestern environment “is totally different than where hops is typically grown.”

Nebraska has more clay-heavy soils, but also more wind, good for keeping humidity down. Under a recent grant from the Nebraska Department of Agriculture, Adams has launched a new hops research project. He’s selected eight hop varieties he knows craft brewers want to use—like Willamette, Pearl, Crystal, and Chinook—to grow on test plots in four places around the state with different climates and soil types, to evaluate their performance over time.

“We want to see if there's some consistency in the productivity. Given our environment is somewhat volatile, we want to identify varieties that the farmer will be able to market. ‘Cause the brewers are mainly looking for consistency from year to year to year,” Adams said.

He’ll also be studying the effects of different chemicals on hops and at least one plot will grow hops organically. Adams said there’s lots of potential for hops as a specialty crop in Nebraska, but because it’s expensive to establish, he wants to make sure the young industry gets off on the right foot. 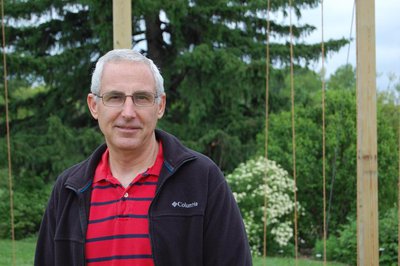 Stacy Adams is associate professor of practice in the department of agronomy and horticulture at the University of Nebraska-Lincoln. He's working on several research projects related to Nebraska hops. Learn more.

That’s where Midwest Hop Producers hopes to come in. In addition to growing and marketing their own hops and those of others, founders Annette and Bruce Wiles are creating the first commercial hops processing facility in Nebraska.

Several Nebraska breweries already use locally-grown hops in specialty or seasonal beers, often buying them fresh off the bine (hop vines are actually called bines with a “b”) from small-scale growers like members of the Nebraska Hop Growers Association. About 25 people from that more grassroots organization routinely sell to commercial breweries around the state.

But for large-scale production brewers prefer hops ground up and pressed into small pellets, which requires specialized equipment. Midwest Hop Producers will handle that—as well as packaging and selling to brewers.

“Hops when they come off the bine are 80 percent moisture so you got to dry them slow and at low heat so you don't burn the oils that are inside them,” Wiles said. Midwest Hop Producers is also developing equipment for small-scale growers, and hopes to work with growers around the state.

“We're in our second year now and learning a lot. Taking as much of the best practices as we can from other growers that share that with us and we want to do the same here and pay it forward with anyone else in the state that wants to learn,” Wiles said. 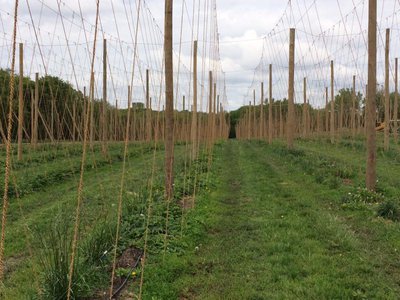 Hop trellises at Nebraska Hop Yards (a branch of Midwest Hop Producers), in Plattsmouth, Nebraska. The company planted 15 acres of hops in 2015. This year they'll plant 40 acres, and hope to get up to 140 acres during the next couple years.

“We're really really excited about that part of the industry growing,” Kavulak said. They’ve used Nebraska-grown hops in some small batch beers but Kavulak said in addition to getting a sufficient supply, quality and consistency will remain key.

“As the hop producers continue to expand their operations, we'll do test batches and make sure what they're using is either compatible with what we're already doing or develop some other recipes that are compatible with the hops they're growing,” she said.

This year’s bill also created the Nebraska Craft Brewery Board to support research, marketing, and promotion of Nebraska brewing and agricultural products used in beer production. Nebraska brewers said they’re encouraged by support from the state and university. Because, Kavulak said, it’s not about drinking.

“We could be making widgets. It's small business and it's what we do in our communities. We happen to be passionate about making beer,” Kavulak said.

State Senator Colby Coash, one of the bill’s sponsors, agreed. “This industry represents jobs. And it also represents an investment in our people and our culture. So we [the Legislature] look for opportunity to help industry grow and to bring more people into our state,” Coash said.

Nebraska brewers and hop growers are planning their first joint meeting in January 2017 to plan how they can work together to continue to craft award-winning Nebraska beer.