Nebraska grappling with problem of homelessness from streets to State Capitol

From the state capitol to city streets, Nebraskans are grappling with the problem of homelessness. But the problem looks different from different angles, as does the search for solutions.

On a snowy morning in Lincoln, Mike Stimson stands on a street corner, snow partially obscuring the cardboard sign he’s holding asking passersby for help. Stimson, 58, says he’s been homeless on and off for decades.

“Just kind of down on my luck – out of work. Went through a divorce. And just ups and downs through life. Just been on the streets on and off for the last probably 20-some years,” Stimson explained. 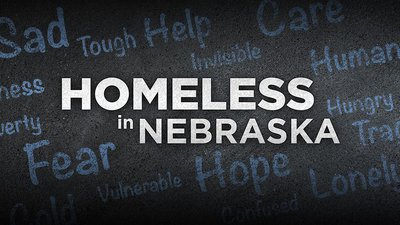 Six blocks away in the Nebraska State Capitol, Lincoln Sen. Kathy Campbell heads a task force studying how poverty passes from generation to generation. She says part of that study involves homelessness.

“What we will take a look at in the task force is what are the programs that serve that population to help them not be homeless,” Campbell said.

“Fifty percent of our women and children are victims of domestic violence. Thirty percent of our men are veterans. We have a number of those seeking our services that have mental health issues. We have huge barriers when it comes to education and vocational training for acquiring a livable wage. And so it is a little bit complex,” Gregory said.

Homelessness is not just a problem in Nebraska’s cities. Statewide, over 10,000 people were counted as homeless at some point last year – a little over half in Omaha, about a quarter in Lincoln, and the balance in the rest of the state, according to the University of Nebraska-Lincoln’s Center on Children, Families and the Law.

“That doesn’t count the ones that are couch-surfing, sleeping in churches, sleeping in their cars,” she said.

And while Lincoln and Omaha send workers out to count homeless people, accurate figures are harder to come by in rural areas, says Mike Heavrin of Northeast Nebraska Community Action Partnership, headquartered in the small town of Pender. (For information from the Nebraska Commission on Housing and Homelessness, click here).(For a national report including state-by-state comparisons from the U.S. Dept. of Housing and Urban Development, click here).

Just as the causes and numbers of people being homeless vary, so too, the borderline between being poor and homeless can be blurry, says Beatty Brasch of Lincoln’s Center for People in Need.

Jeff Chambers of the Center on Children, Families and the Law says while programs aimed at fighting poverty help, they’re not the entire solution. 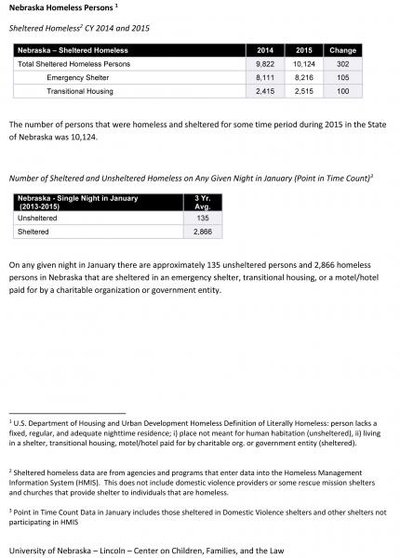 Figures on homelessness from UNL's Center on Children, Families and the Law.

Gregory says some basic things need to be done.

“You need to create opportunities that are available for people who have been living in poverty and in many cases for generations. And it starts basic: We need education. We need vocational training and skill sets that can help people to actually work and earn a livable wage. We need mental health programs so we have people who aren’t living on our streets, under bridges, in campgrounds, abandoned buildings, without their psychotropic medications,” Gregory said. “The list is so long.”

Back on the street in downtown Lincoln, Mike Stimson adds another item to that list: understanding.

“The stigma about the homeless people – I think people really need to wake up to that because not all of us out here are alcoholics or drug addicts. We’re just people, just trying to make it, just trying to survive, trying to live,” he said. “A lot of people don’t understand that. They walk by land they look at you like you’re not any better than a cow pie sitting out in the middle of a corn field.”

Chambers says progress is being made, even if it won’t solve everything.

“There’s definitely some good signs. I know in Lincoln we’re very close with some initiatives to ending veterans’ homelessness. And ending veterans’ homelessness does not mean there’s not going to be any veterans that are ever homeless on the street. It means that we’re able to identify those veterans, provide an option for them to be housed and the ability to be housed within a very short period of time,” Chambers said.

Brasch says more can be done.

“We’ve got the resources to take care of people if we just do it. And I don’t mean enable ‘em. But help them so they can get ahead. And most of them, that’s what they want,” she said.

As the legislative task force continues its work, Campbell says she hopes it will come up with solutions for both homelessness that results from emergencies, as well as from chronic problems.

“We’re going to be focused much more on what we invest in programs to help people either prevent being in a homeless situation or to help them out of it,” Campbell said.

Meanwhile, Mike Stimson says he tries to look on the bright side.

“I always think to myself, y’know, I don’t let it get me down, because it’s like I could always be worse off,” he said.

Editor's Note: Listen for NET News Signature Stories on homelessness in Nebraska Tuesdays through March 1 at 6:45 a.m., 8:45 a.m. and 4;45 p.m. CT on NET Radio. Watch our "Educating the Homeless in Nebraska" discussion program any time online. Learn more about this topic and find resources on our "Homeless in Nebraska" web page.