Nebraska Gears Up for Tree-Killing Insect 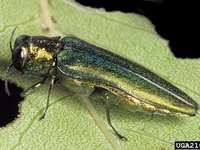 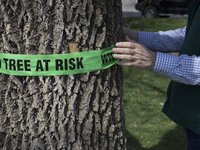 For years, Nebraska foresters have dreaded the arrival of a little green bug—the emerald ash borer, an ash tree killer. Last month, the bug was discovered in eastern Nebraska for the first time.

On a steamy summer morning, Jim Haas strides across a lush lawn to a tall ash tree. He carries a big, pronged ruler. He’s evaluating the tree on a quiet residential street in Lincoln.

“I'm going to measure this ash tree, get the diameter at breast height, to get an idea of how much product we need to put in the tree if we're going to inject this for emerald ash borer,” said Haas, president of Lincoln Tree Service.

With a broad, leafy canopy, few signs of decay, pronounced root flares and well-calloused pruning scars, Haas determines the tree is quite healthy.

“This is a great candidate for injection,” he tells homeowner Brenda Zitek. She called Haas to see about treatment for her tree. 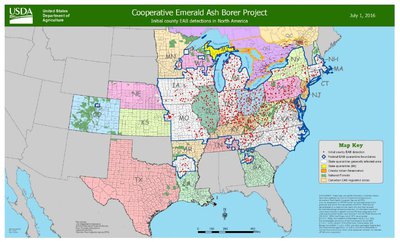 The emerald ash borer was discovered in Michigan in 2002. Since then, the bug has spread south and west, leaving millions of dead ash trees in its wake. (Map courtesy USDA)

“You read all the time about the ash borer entering into Nebraska. We live in a neighborhood full of mature trees and I just want to make sure that this tree gets every chance to survive,” Zitek said.

Even before the beetle showed up in Omaha in early June, the pest garnered plenty of attention. That’s because in the last 15 years, emerald ash borer has killed millions of ash trees across the eastern U.S. Zitek doesn’t want hers to be one of them.

That’s a common response from homeowners, said Mark Harrell, forest health program leader with the Nebraska Forest Service. His agency has been preparing for the bug’s arrival for years, keeping an eye on its westward crawl across the country. A second bug was found in a town northeast of Lincoln just a couple weeks ago.

“And since then we've been kind of monitoring it. We’ve had lots of people call in thinking that they’ve had it in their trees,” Harrell said. He and his staff have gone out to see many trees, talked to people over the phone, and looked at pictures sent by email.

Harrell says they suspect the bug may already be in other places in eastern Nebraska too. “So we're just kind of constantly now on the lookout for more locations,” Harrell said.

While the beetle will only fly about a mile on its own, humans often unwittingly help it travel to new areas.

“The insect can spread actually hundreds of miles by firewood. Or 20 or 30 miles by a car commuting from one place to another. So it's hard to know when it's going to show up,” Harrell said.

The Nebraska Forest Service estimates about nine percent of trees in Nebraska are ash. Douglas, Sarpy, Cass, Washington and Dodge counties are now under a state quarantine restricting the movement of firewood and wood waste. But it’s only a matter of time before the emerald ash borer spans from Omaha to Scottsbluff, Harrell said.

“We don't know how long it might take, 10 years, 20 years. It might take 50 years to get into all the corners of the state. But eventually it's going to be all across Nebraska,” Harrell said.

The bug attacks trees by boring into the cambium—a layer between the outer bark and inner heartwood. That disrupts the flow of nutrients and water up the trunk. Professional treatments usually involve injecting insecticide into the trunk to kill the beetle. Harrell recommends trunk injections over soil drenching, which can expose many non-target insects and animals to high levels of pesticide. But ultimately, he said treatment generally only delays the inevitable, because “there's no way we can save the tree from EAB forever.”

How to Select Trees For Treatment

Part of the challenge is that emerald ash borer attacks healthy and damaged trees alike. That means the majority of ash trees – which now line city streets, parks and neighborhoods – will eventually need to come down. And it won’t be cheap.

“We're estimating that to be about $961 million for the million trees that we have across the state, in communities. So that's a pretty big hit statewide,” Harrell said.

Last year the Nebraska Forest Service and others worked with State Senator Patty Pansing Brooks on legislation to fund treatment and removal of ash trees across the state. While that measure didn’t pass, Pansing Brooks plans to bring it back next spring.

For his part, Jim Haas of Lincoln Tree Service said he plans to wait on treatment until emerald ash borer is found in Lincoln. That’s because treating the tree actually opens it up to more risk of disease and decay by drilling holes in the trunk. Over time, that damage accumulates.

“If you start injecting too soon you're going to just put holes in trees. And if there's no evidence of the pest being here yet there's no point in injecting this early,” Haas said. That’s why it’s important to prioritize treating healthy, mature trees, which can heal those holes. 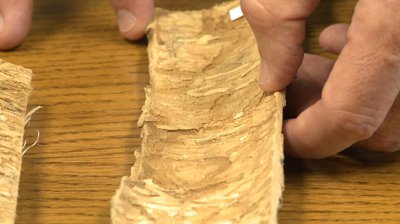 Treatment can extend a tree’s life for a decade or more, Haas said, so he thinks “we're going to have surviving ash trees through treatment, through luck.”

This isn’t the first tree pest or disease to sweep through the state. Dutch elm disease killed most American elm trees half a century ago. Ironically, that’s why we have so many ash trees in communities now, Harrell said, because “at the time those elms were dying, people were looking for replacements, and ash seemed to be a very good species.”

As communities and homeowners begin to deal with emerald ash borer, Harrell said the lesson learned from the past is clear: “We need to focus on diversity and not just look for a single species to replace these trees that we're losing.”

He recommends planting many different trees to take the place of ash, so that the next time a major pest comes through, not all will be at risk at once.