The senior judge in Nebraska’s U.S. District Court “pulled the plug” on his controversial legal blog after the district’s chief judge informed him courthouse employees considered his online writings “an embarrassment to our court.”

Judge Richard Kopf wrote in Thursday’s final post the decision to cease the blog was his alone because he “could not tolerate the thought” of having “lost the confidence of our employees.” In an interview with NET News Kopf said hearing the harsh appraisal of courthouse staff “was a punch in the gut.”

Kopf insisted ending the blog had nothing to do with any specific article or statement made in the over 1,000 entries posted since it started in February 2013.

On July 6, under the headline “Senator Ted Cruz is not fit to be President,” Kopf attacked the Republican presidential candidate’s proposal to subject the justices of the Supreme Court to retention elections every eight years. Cruz made the recommendation after expressing his outrage with the high court’s ruling on the Affordable Care Act and same-sex marriage. Kopf called the proposal “wacko.” 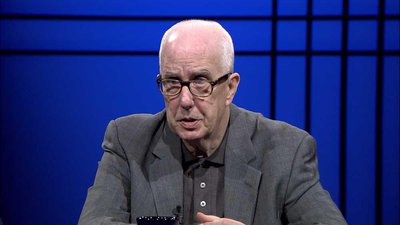 Kopf explains why he ended his blog. Click here.

stating “a judge should not . . . publicly endorse or oppose a candidate for public office.” No action has yet been filed. Kopf apologized to Cruz in a subsequent online post while standing by his criticism of the proposal.

In the interview recorded Friday with NET News, Kopf said Chief Judge Laurie Smith Camp did not ask him to step down nor is he considering resigning.

Kopf’s two year old blog, titled “Hercules and the Umpire,” became a popular and controversial feature in the legal community, sharing blunt and personal reflections on everything from analysis of U.S. Supreme Court rulings to the toll cancer treatments took on Kopf’s stamina and outlook. (In noting his health was not a reason to discontinue his writing Kopf wrote “I am perfectly healthy. As far as cognition is concerned, I am no more goofy now than I was when I was appointed.”)

From the start Kopf said he intended the blog to provide insight into the job of a federal judge and always intended not to shy away from sharing his opinions. “It was very much an experiment and there was some good parts of that experiment and some not so good parts,” Kopf told NET News. “It didn’t end the way I wanted it to, but that’s the nature of experiments.”

Among posts that riled debate and raised the scorn of some readers:

Kopf said his decision was “irrevocable” but the site will remain open for another week to accept comments and all articles will remain archived online.

Kopf ended his blog “Hercules and the Umpire” after court employees raised concerns during a retreat Thursday. The chief federal court judge for Nebraska told Kopf one courthouse staff member asked if others felt Kopf’s blog had become an embarrassment to the court. The judge asked for a show of hands. The chief judge reported a great majority said yes.

“There is nothing more important to me than the United States District Court for the District of Nebraska,” Kopf said during his interview with NET. “If I’ve lost the confidence of the employees because I write the blog, then I think I’m duty-bound to pull the plug.”