Nebraska farmers and ranchers hit hard by the recent bad weather have already been dealing with low commodity prices, trade tariffs and high property taxes. In a business that requires a lot of faith and hard work, it’s not easy for some operations to pay the bills, much less turn a profit, in the current agricultural environment.

As Tom Geisler trudges through the mud on his farm in Hooper, in northeast Nebraska, all he can see is a big mess. He grows corn and soybeans on a thousand acres in this small town, but high water from last month’s floods wrecked pretty much everything.

"I’ve never seen anything like this before. Never even had water in the yard here before on the place,” Geisler said. “It’s just been deep and devastating. One thing that was really bad was the ice cakes floating down and just cutting everything to pieces.”

Geisler has been at this for more than forty years and is a fifth-generation farmer. It’s in his blood, but things haven’t been easy lately, with low prices for corn and soybeans, property taxes close to $100 an acre, and now this. 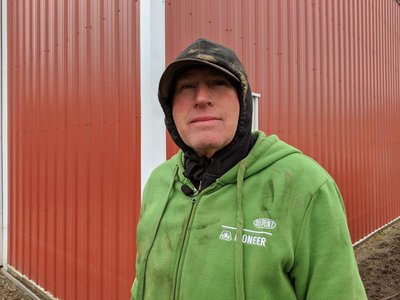 “Always been ups and downs ever since I’ve been farming,” Geisler said. “My dad always said the same thing. Just watch out for the bad years and prepare for it because you’re going to have them, no matter what. Too bad it has to be that way, but that’s the way it is.”

It’s a common story in Nebraska and across the Midwest. Some farmers and ranchers are struggling to stay in business. Net farm income has been down for a while and many farmers and ranchers have more debt than they did a few years ago. Tina Barrett is the president of Lincoln-based Nebraska Farm Business and helps Midwest producers navigate tough financial times.

“Everything has been kind of crazy for a while and coming off a significant price decline over the last few years and adjusting to that and now we’re dealing with flooding in significant areas of Nebraska,” Barrett said. “And all of those things are kind of coming into play and creating an unknown for 2019 that we haven’t seen in a while.”

Those unknowns can be stressful on farmers and ranchers who have built their lives around their crops and livestock.

John Hansen is the president of the Nebraska Farmers Union and has been a part of the Rural Response Hotline since it started in 1984. It’s a phone number farmers and ranchers can call for mental health resources and other assistance during tough times. 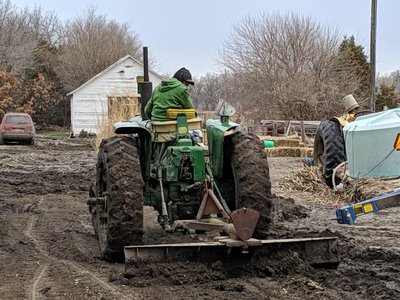 Tom Geisler on his tractor at his farm in Hooper, Nebraska. (Photo by Jack Williams, NET News)

“This last year, we set four new all-time monthly highs for the most new first-time high-stress phone callers,” Hansen said. “This is the worst ag turn-down since the mid-1980’s so there’s a great need, of course, for services right now and then, of course, the flood just makes all of that more-so.”

Hansen says many agriculture producers in a hole financially have a hard time admitting they’re failing.

“This is how they get their idea of who they are,” Hansen said. “It’s their identity, it’s their inheritance, it’s their legacy. It’s all of these things and in addition to being a high-risk, capital-intensive, low-margin business.”

While some Nebraska farmers and ranchers are struggling now, Creighton University economist Ernie Goss says many of them entered this downtown in a pretty good place financially after a run of high commodity prices a few years ago. And, he says, there will always be a demand for their products, despite the recent slowdown. 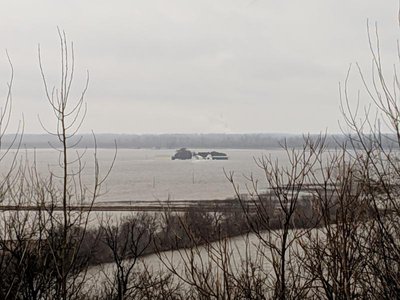 “There’s one thing that we all need, and that’s food and that’s globally. It doesn’t matter if you’re in China, India, France or Germany, wherever,” Goss said. “They need food and they need it from the most productive farmer on the face of the earth and that’s the farmers in this nation, the U.S., and the farmers in the Midwest, particularly very productive. In the long run, you couldn’t be more dependent on an industry than agriculture.”

Steve Nelson is the president of the Nebraska Farm Bureau, an organization that represents 61,000 member families across the state. He says there are reasons to feel optimistic, but he knows some farmers and ranchers won’t make it out of this downturn.

“It could be that it will take a year or two before they understand that they can’t come back from this kind of loss,” Nelson said. “So I have a lot of concern about that. So, I certainly want to be positive and have some optimism, but there are some really serious issues out there that will need to be dealt with.”

Back at Tom Geisler’s place in Hooper, Nebraska, he’s fixing and saving what he can. It’s a big mess, but he’s optimistic things will work out.

“You just have to be resilient and keep going and hopefully it will work out for us this year,” said Geisler. “At least something. Hopefully, we’ll have a good crop, but nobody knows that except God, so.”

Surrounded by a landscape he hardly recognizes, he pauses to look around at a scene of mud and destruction.

“Someday I hope to get it back to the way it was. It’s going to be a while,” he said.

Nebraska Farm Bureau Eager for 'Right to Repair' Agreement in 2020
Wet Weather Delays Planting, May Be More Common in Future
How to Make Flyover Country More Welcoming to Migrating Birds