The county's Board of Supervisors voted to deny the Canadian company behind it the permit it needs to lay pipe through the county.

It was the latest reminder that bringing the tar sands oil pipeline through Nebraska was never going to be a sprint. In a process sometimes described as a marathon in the coming months it more closely resembles an obstacle course to be run by the project's developer, TC Energy (formerly TransCanada). 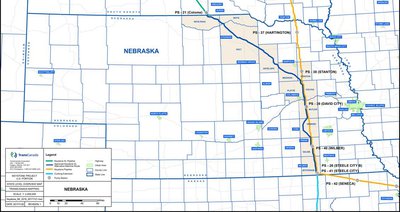 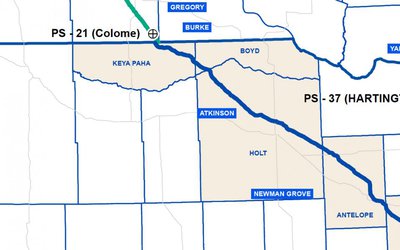 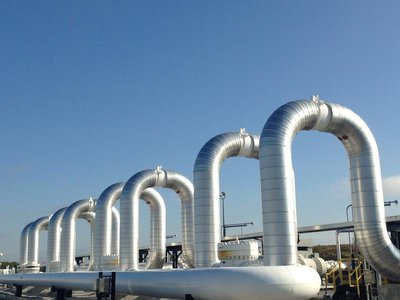 Coming up are a series of challenges from counties and individual landowners along the 280 miles of Nebraska land included on the route. The project would extend the existing pipeline to the south by 1,661 miles with a 36-inch crude oil pipeline originating at a tar sands processing facility in Alberta, Canada, and extending southeast through Saskatchewan, Montana, South Dakota to Nebraska's southern border with Kansas.

Along the route, most Nebraska counties have either agreed to necessary zoning changes or don't regulate underground pipelines.

Most also signed agreements address the impact on county roads should construction occur.

One county, in particular, remains skeptical of the project.

The zoning committee appointed by the county board of supervisors recommended rejecting the land use permit needed for construction to proceed in that north-central Nebraska county. At their February meeting, the committee six voted to recommend denying it, one voted for approval, and another abstained.

Zoning chair Frank Heying said the majority felt the application was "incomplete," and TC Energy "needs to get some things in order" before they would recommend granting a permit.

Heying said most on the committee felt the company needed to provide additional information about where the pipeline would cross drainage tiles on private land used to control excess water from cropland.

The combination of rolling hills and flatlands surrounding the county's network of rivers and streams should be given the company's full attention in Heying's opinion.

"If you have a leak in that pipeline, and that happens to be on a piece of ground that is tiled for drainage to drain underground water, if that oil gets (out of) that pipeline and contaminates that water supply, it's going to be a serious matter."

"We have people concerned with that," he said.

A roomful of those concerned people showed up Monday for a public hearing before the County Board of Supervisors voted on the zoning permit. Most Holt County residents who spoke agreed with the zoning board's earlier recommendation.

"You guys have got to stick up for us and hang in there for us," said Wayne Hipke, to a round of applause from the audience. He testified he has land less than half a mile from the pipeline's route in the northwest corner of the county.

"I really feel foreign companies should not be able to force eminent domain on us," Hipke said, referring to the law allowing the state to take control of private property, if considered to be in the public good.

Testifying on her 75th birthday, Katheren Genung told the commissioners she pays taxes on three parcels of native pastureland near the ranch where she was raised. She asked the elected officials not to "sell out" to a private company conducting "an unethical eminent domain for private gain."

Vickie Desieve, who said she was born and raised in the county, questioned the proximity of the pipeline to the county's waterways, speculated if the project had been in place last year, "because of the floods that pipeline would be up out of the ground by now."

Many spoke of their belief that the pipeline remained an environmental hazard, even after being routed farther east to lessen its exposure to the Sandhills.

Following testimony, the Board of Supervisors voted unanimously to "accept the recommendation of Planning and Zoning to deny the permit." The denial was conditioned on the company "identifying all private drainage tiles" once condemnation actions against individual landowners are successful. Most of those condemnations are being challenged in Holt County District Court.

Most of the eleven counties along the route with zoning authority already approved plans for the pipeline.

Most recently, Antelope County moved to provide necessary permits for locating the tar sands pipeline. The county board delayed approval of another type of local agreement required for pipeline construction at its March 24 meeting.

"Road haul" agreements are being negotiated or have already been approved with each local entity along the Nebraska route.

Those contracts provide a detailed list of each county road to be impacted by construction. They cover everything from detours and dust control during construction to replacing gravel once the pipeline is covered up again.

Colfax County's highway superintendent, Mike Arps explained: "there's a signed contract with the county that (the pipeline company) is responsible for maintenance, any type of damages or whatever and that they will abide by the contract and repair it as needed to get the road back into suitable condition" for county residents following construction.

Arps told NET News the process has been problem-free, and he wished "all the other projects in Colfax County would be as easy as this."

To support their contract, TC Energy provided "a three-ring binder full of the documentation."

Arps said the company "pretty much covered all the bases."

Holt County has delayed action on it road haul agreement until after the zoning issue is resolved.

The company would not answer questions about the process of working with local governments but wrote to NET News: "We continue to engage and work with the counties along the route on road-haul agreements. It is part of our commitment to Nebraskans that when construction occurs, it will be done safely and with minimal disruption."

The most vexing test for the Keystone pipeline at the local level remains the defiance of local landowners who control acres of land needed along the route.

The landowner's attorney Brian Jorde told NET News TC Energy offered thousands of dollars for the property rights and additional money for the inconvenience during construction. He says his clients do not believe it's enough money to compensate for their land rights.

"We are appealing on behalf of all of them," Jorde said, "because the awards simply haven't been in the sum that truly understands the risks and the true costs and the true damage of having this on your land."

Another element of the legal challenges question the legality of the approval process that gave state authorization to the pipeline's route by the Nebraska Public Service Commission.

Jorde said his clients "are taking it all the way back to the Nebraska constitution."

"We're arguing that the entire process of approving the mainline, alternative route which gave rise to the condemnation, is constitutionally invalid."

The Nebraska Attorney General received notification there will be constitutional issues for the state to defend.

The Attorney General will "be getting a very large envelope from us with well over thirteen, fourteen hundred pages" from approximately 75 lawsuits filed in 11 district courts.

If those arguments are successful, individual cases could be merged for a potential argument before the Nebraska Supreme Court.

In late January, NET News received the last email from a TC Energy spokesperson before going silent on the matter.

"Our plan is to start pre-construction activities and pipeline construction this spring in Canada and parts of the US. This includes mobilizing equipment in February and beginning workforce camp preparation in the US, in preparation for the start of construction. We also plan to start construction on the 1.2-mile border crossing in April."