In the last year, solar power has taken off across Nebraska. Communities around the state have invested in small projects to help diversify their electricity sources and offer renewable energy alternatives to residents.

On the east side of the city of Fremont, a 10-acre parcel has sprouted thousands of metal posts, which will soon hold solar panels. Once fully built, Fremont’s new community solar farm will offer a sharp contrast to the nearby coal plant, which provides enough power to supply the whole city, according to Fremont City Administrator Brian Newton.

But the coal plant is aging. So when Newton came to Fremont a couple years ago, city officials started looking at ways to diversify the power supply. They bought 40 megawatts of power from a wind farm south of Hastings. Then Newton used a federal grant to explore building a community solar project.

“What we found out was, as a municipality, we could finance and do it cheaper than what we could buy it from a power purchase agreement or any other arrangement,” Newton said. The next step was a community survey to gauge interest from customers.

“I simply wanted to see how many folks in Fremont would be supportive of solar. I had no idea. The survey came back: 70 percent of those that responded said they would be interested in solar. Which frankly, really surprised us,” Newton said. “We didn't think it was going to be that high.” 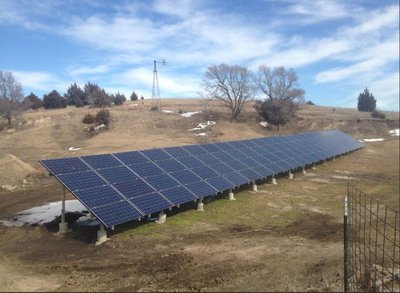 Solar Power on the Rise in Nebraska 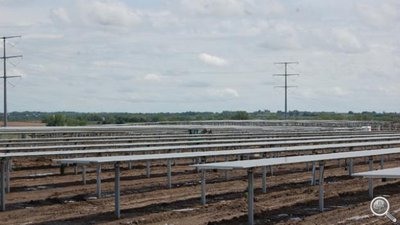 Most of those are residential customers, who can get up to 80 percent of their electricity by either buying the solar panels outright or by buying shares in the project. This model is similar to several other projects that have been popping up across the state. Other projects sell the power directly to commercial, or business, customers.

Molly Brown is vice president of energy production at GenPro Energy Solutions, a developer that’s been building solar projects with municipalities across Nebraska, including Fremont. She said interest has exploded in the last year. “This year I feel like we're just kind of running from town to town to town putting in these programs.”

Many Nebraska cities and utilities contract with third-party solar developers who build the project and can take advantage of federal tax credits (which aren't available to public power entities). These projects can help communities save money over time and demonstrate a commitment to sustainability, Brown said.

“People are really starting to recognize that energy is so important to what we do on an everyday level that controlling that energy and using it to the best of our ability, be that through solar, wind, is really important,” Brown said.

Central City, Gothenburg and Aurora have all built small solar projects, and Lexington and Lincoln Electric System have built large (around five megawatts) projects in the last 18 months. For LES, the project is much bigger than current demand: only about one percent of their residential customers have paid to participate in or support the project, so there’s still plenty of room for others to enroll.

Nebraska Public Power District partnered with Scottsbluff and Venango on two small community solar projects, and is now working on two much larger projects—around five megawatts each—in Scottsbluff and Kearney. Once built, Kearney plans to sell the solar power to UNK, Central Community College and tech company Xpansion, as well as other customers, according to Tim Arlt, general manager of NPPD’s retail division, which serves 80 communities throughout Nebraska.

“We've also had interest in numerous other communities, I can think of at least a half a dozen. The interest level across the state continues to increase for community solar,” Arlt said.

Several projects around the state rely on a similar model, which allows residential customers to get up to 80 percent of their electricity needs by either buying solar panels (virtual net metering) or by buying shares in the project. An example from LES's program is below. See a larger image. 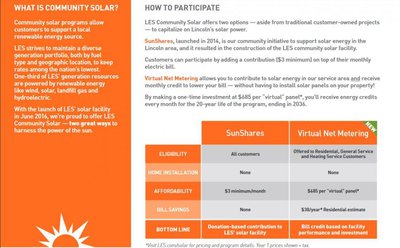 Customers often pay a slightly higher price at the outset to get a portion of their power from solar. But solar power offers a hedge against future energy price increases, because the rates are locked in for the life of the project—typically 20 to 30 years.

“And from a pricing perspective we're seeing pricing continue to decline. So at some point there'll be a break-even point or the solar projects will be lower than our base energy price embedded inside of our rate,” Arlt said.

Under its contracts, NPPD limits its retail and wholesale communities to generating 10 percent of their energy from renewable sources—meaning that towns like Scottsbluff and Kearney have a cap on the amount of total solar power they can develop—but so far, few communities are close to reaching that amount.

Under Nebraska law, anyone can install up to 25 kilowatts of solar panels on their own property and reduce the energy they buy from the grid—what’s known as net metering. But Ken Winston, policy and outreach director for the climate advocacy group Nebraska Interfaith Power and Light, said there are many benefits to community—as opposed to individual—solar projects.

“One is it can be scaled to the size of the community. And it can allow people to invest in it through their community project,” Winston said.

Many community projects use something called “virtual” net metering, letting customers buy a solar panel in the project, the power from which then gets credited to their monthly bill. That saves people the high upfront costs and hassle of installing solar panels on their own property—which opens up solar to a much wider swath of the community, Winston said.

“A lot of people don't have that kind of money to invest. And the other thing is just the logistics of it. Sometimes there's neighborhood covenants that won't let people put [solar panels] on their roofs. And sometimes a person doesn't have a south-facing roof, or maybe they live in an apartment,” Winston said.

Several bills were introduced in the last legislative session to encourage community solar. As communities across the state continue building these projects, Winston said some legal guidelines could be helpful.

“We're just scratching the surface. Nebraska has lots of solar potential and there's a lot of interest. Let's make sure we have the tools to make that happen,” he said.

Still, it’s important to keep perspective on the size of these projects relative to conventional energy production. Take the city of Fremont, for example.

“This is a very, small, small share [of total electric generation],” Newton said. “Right now we have coal generation units of about 120 megawatts, this is 1.5 megawatts. But you got to start somewhere.”

And he said the project is accomplishing his goal:

“What we wanted to do on this community solar farm is buy down the cost of renewable energy. I wanted to make it so affordable that you didn't want to put a panel on your roof. Strength in numbers. It's economies of scale,” Newton said.

They’re already planning to build another 1 MW solar farm, and have a list of folks waiting to sign up for shares.