In the last decade, drought hit the Wind River Reservation in west-central Wyoming hard. The tribes that live there: the Northern Arapaho and Eastern Shoshone, depend almost entirely on snowpack for their water supply. And even that often isn’t enough.

The irrigation season runs from May to October, but due to limited storage, “many years our irrigators are left without water from as early as the fourth of July to mid-August,” said Mitch Cottenoir, tribal water engineer.

After the severe drought of 2012, he wanted a tool to help make more-informed decisions about the reservation’s water supply. But analyzing climate data—and how it’s changing—can be challenging without a specialized degree.

In 2014, his office formed a partnership with regional climate agencies in Colorado and Nebraska, including the National Drought Mitigation Center, to help gather and analyze local climate data and make better predictions about their water supply. 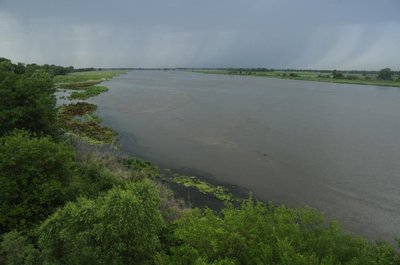 Above, the Platte River in central Nebraska in August 2011, a big water year across the Intermountain West. Below, the same view a year later in August 2012, a year of record-setting drought across the country. 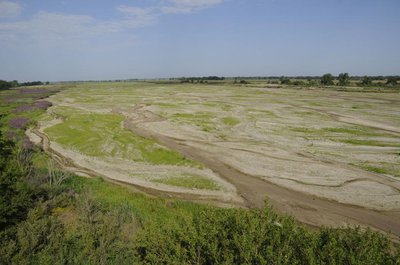 “The idea is that we want to transfer this knowledge that we have on climate conditions in the region to the tribe so they can be self-reliant and be able to use and interpret the information themselves,” said Crystal Stiles, an applied climatologist with the High Plains Regional Climate Center, based in Lincoln.

During the first year of the partnership, Nebraska and Colorado climatologists visited the Wind River reservation to better understand local geography, snowpack and irrigation systems. After talking with the tribes to determine what kind of information would be useful, Stiles helped develop a regional climate and drought summary.

“A majority of the summary focuses on the last season’s climate conditions, drought conditions that have occurred, water supply,” Stiles said. “Depending on the time of year it could be stream flow information in the summer months, but in the winter months snowpack is extremely important to them.” The summary also includes an outlook section for future conditions.

To learn to create these climate and drought summaries, three water technicians from the tribal water engineers office visited Lincoln for a training session last July. The training included basic climate and drought information, as well as how to find, analyze and interpret weather and climate data. It’s been very valuable, said Cottenoir.

“The data's always been there but we didn't know how to access it and where to access it. But through the training of our younger water techs, the future looks bright cause they're going to have that new improved technical capability to where they can interpret that data,” Cottenoir said.

In the last several months the groups have worked together to produce quarterly climate and drought summaries for the reservation. The tribal water office is taking increased ownership over the document and eventually plans to write the reports on their own. Stiles said a critical piece is their contribution of local knowledge.

“We don't really know what's going on in their region as they do.”

“You can tell people you know, it's going to be this warm or this cold. But unless you have the impacts that may go along with that, it's not as meaningful. And so it does provide that local context for people. That part is extremely important,” Stiles said. 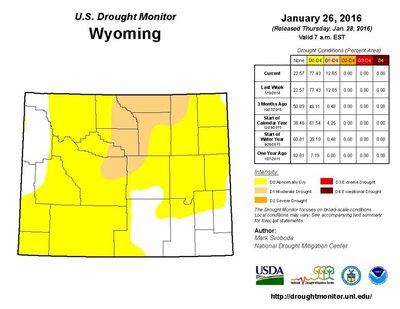 Current data shows the eastern part of the Wind River Reservation in drought.

And the value of that local, qualitative information will only grow, said Nebraska State Climatologist Martha Shulski.

“There’s a real value to having that and documenting that, and these are documents that will last for years and so they’ll be able to see changes over time and how impacts have shifted or increased over time,” Shulski said.

The High Plains Regional Climate Center has been working on a starting similar partnership with tribes in northeast Kansas, and they’ve submitted a proposal to fund climate work with tribes in Nebraska and South Dakota. The training will likely follow the same collaborative process as the work with the Wind River tribes, Shulski said.

As the climate and snowpack patterns change, understanding climate, drought and weather patterns, will only become critical, especially for water management. Cottenoir said these summaries will help people on the reservation prepare for drought situations, particularly in advance of the annual growing season.

“To be able to advise our irrigators within our community and the surrounding areas to the potential of drought situations so that they can make financial and personal decisions on what they want to do.” Cottenoir said.

They’ve also been sharing the climate and drought summaries with irrigators and water districts in the larger region. But Cottenoir said the climate reports are only the first step. Larger climate, agriculture and water supply studies are also underway on the reservation.

“This drought summary is just a tool to communicate what's going on climate-wise. The overall idea is to become more prepared for drought,” he said.

Currently, the eastern portion of the reservation is in mild drought. These tools will help them be ready to take action when the next big drought hits.