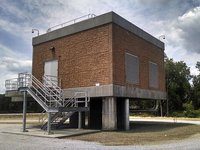 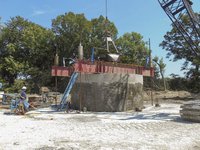 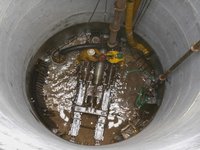 The Platte River may not be able to sustain all the demands it faces in the future. Some of Nebraska’s cities and towns that depend upon the Platte River are looking for alternate water supplies in the coming years.

From a water supply standpoint, Lincoln has always been a little precarious.

In its youth, the city relied on local groundwater wells. But early residents soon found the water around Lincoln, “not suitable for drinking, but good for thermal baths,” said Eric Lee, Lincoln Water System’s assistant superintendent of water production and treatment.

Lincoln sits on porous geologic formations. Naturally rising deep salty groundwater deposits, accelerated by well pumping, made local wells too saline. In fact, the economic potential of a salt industry was a factor in relocating the capital of the Nebraska territory to the area from Omaha in 1867. City planners soon realized the limited quantity of salty water locally available would not support Lincoln’s population growth.

So in the early 1930s the city decided to go 30 miles northeast for water, drilling wells and building treatment facilities in the Ashland area. After being sourced and treated in Ashland, water is pumped back down to Lincoln.

Lincoln’s water supply comes from well fields in an aquifer along the Platte River, not directly out of the river itself. But “the river flow is very important to keeping that aquifer full and [our] ability to run a lot of wells,” Lee said.

An editorial in The Courier from November 6, 1897, against the installation of water meters. (Library of Congress)

Tributaries like the Loup and Elkhorn rivers, fed by groundwater and precipitation, significantly boost flows in the lower Platte River, at times comprising 60 to 80 percent of flows. But irrigation demands upstream often mean there’s not much water coming through the lower Platte in the summer. Drought and other climate factors also affect the city’s water supply. Dry, hot years in the last decade proved that, said Steve Owen, superintendent of water production for Lincoln Water System.

“2002 was a rough time for Lincoln Water in terms of supply and the drought conditions, and then we had a return to that in 2012. Both of those years we implemented water restrictions,” said Owen. They even ticketed people for using more than their share of water those summers.

And drought isn’t the only concern. Population also plays a role.

On an overgrown island in the middle of the Platte River near Ashland, Lee opened the door to the city’s third and newest horizontal collector well, which started pumping in July. Using technology borrowed from the oil and gas industry, these new wells can pump nearly 10 times the amount of the city’s conventional wells—between 17 to 20 million gallons per day. Construction is already underway on a fourth horizontal collector well and the city plans to build two more in the future.

Owen said they expect these new wells, combined with their 40 conventional wells, to supply the city for the next 20-25 years. But that may not suffice 40 years from now.

“At some point, we will exceed the capacity of the Platte River well field. And also at that time I think there will be a need to have some redundancy. Whenever we look at tying ourselves to just one water source, something could happen to that water source,” Owen said.

Lincoln isn’t alone in planning for future water supplies. Kearney has relied upon a well field in the Platte River since 1983. Kearney Utilities Director Kirk Stocker said the city shares concerns similar to Lincoln: a growing population, the need for an alternate water source, and lower Platte River flows.

“During drought times, the flows in the Platte River are very low and they’re used to recharge the aquifer. Over long extended periods of time, under reduced flows, the capacity of the well field decreases,” Stocker said.

Part of that has to do with their location on the aquifer.

“Where we’re at in the Platte River the aquifer is very thin, so when we extract water from the aquifer we count more on the flow to recharge it,” Stocker said.

In 2009, the city of Kearney added another well field on a different aquifer northwest of the city, increasing their supply by 25 percent. The city of Grand Island, which also pumps water from the Platte, doesn’t have immediate concerns about water supply, but plans to add another three wells in the next 15 years.

So where does Lincoln plan to find an additional, alternate water source in the next 50 years? The Missouri River, Owen said, based on the recommendations of their most recent master plan.

Owen said it’s still out in the future, but “we need to be thinking about that now, even thinking about where that location might be, and then maybe even thinking about funding.” Creating a new water supply like that would be a significant undertaking, and is estimated to cost nearly $500 million dollars in today’s dollars. But the bigger river is subject to fewer issues of low flows than the Platte, especially during summer months.

In the short term, water conservation can help—and already has. Per capita water use in Lincoln (both commercial and residential) has decreased by 25 percent since the early 1980s. That’s allowed the city to delay some well field developments. But Owen says since the gains from easier conservation measures, like low-flow shower heads, have already been achieved, future efforts will need to tackle outside water use, which peaks during the summer.

“Perhaps 50 to 60 percent [of water use] during hot, dry conditions, may be used for irrigation of grass,” or trees and shrubs, Owen said.

Owen said creating a culture of conservation for outside water use may prove difficult.

“This is the Midwest and to some degree folks expect to have plenty of water. So we need to work on changing the mindset a little bit. We need to convince folks that there’s a value to water, and that it’s something that shouldn’t be wasted,” Owen said.

Particularly when that water may eventually be pumped to Lincoln from the Missouri River Basin 50 miles away.

The Platte Basin Timelapse project is seeing a watershed in motion and telling the stories of our water. Learn more at www.plattebasintimelapse.com.