After years of collecting some of the most important contemporary art in America, Robert and Karen Duncan filled a notable gap in their holdings: an official portrait of themselves.

The huge, digitally-composed photo collage portraying the couple was shown for the first time publicly to friends and members of the arts community. Three digital representations of the couple sit side-by-side leaving the impression that all six of the eccentrically-dressed Duncans are gazing at those taking in the artwork.

Wally Mason, director and curator of the Sheldon Museum of Art in Lincoln said the work has “enormous import not only for the world of art but for Nebraskans.” Mason, who was on hand for the unveiling, said having a representation of the Duncans as part of their collection is valuable for posterity as well as the reflection of the couple’s unique eclectic taste in art. 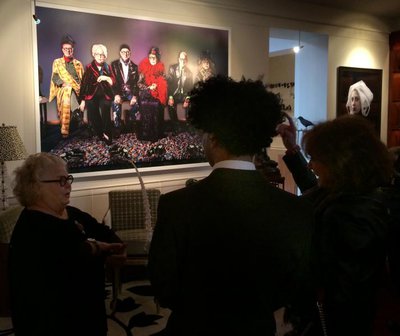 Robert Duncan was more succinct with his take on the work.

Duncan has used his substantial earnings from his Nebraska-based aviation service business to build one of the country’s most respected collections of contemporary art. He and his wife Karen routinely loan important works to galleries in the region and provided substantial financial support to the state’s established art museums.

They were not giving much thought to having an official portrait commissioned until a friend introduced them to the work of Ike’ Ude’.

Based in New York and Nigerian born, Ude’ has focused his photographic work on clothing and how it changes the look, baring and attitude of the person it adorns since his earliest exhibits in 2003.

“Clothing is the shell of civilization,” Ude’ explained. “It’s a wonderful shell of culture. It doesn’t matter how bright we are, if you remove the shelter of clothing we are just animals.” 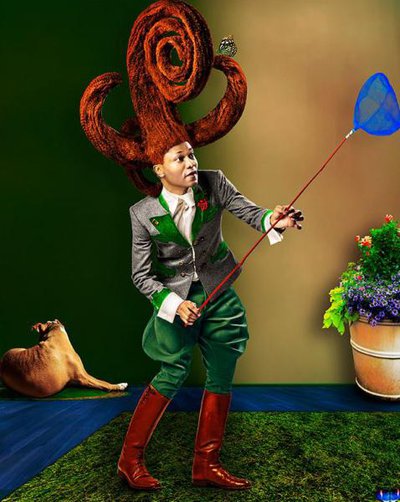 One of Ike' Ude's pieces from "Sartorial Anarchy." (Image courtesy of the artist)

Ude’ specializes in brightly, even shockingly, colored self-portraits. In each picture he wears incongruous and often playful combinations of clothing from all eras and a variety of cultures. A variety of hats, headgear or massive plumes of styled hair complete each of his characters.

In one piece Ude’ pairs boxing headgear with an 18th Century men’s dressing gown. In another, he attempts to lure a butterfly into a net while dressed in a wool Austrian hunting jacket combined with bright green riding breeches. On his head are the massive red curls of a hair piece from his native Nigeria.

“I look at these items as performers on the body,” Ude’ said. When envisioning a completed work he looks at each piece of costuming. “I begin to analyze which of the items make for a good protagonist part in the picture.”

His body of work, titled Sartorial Anarchy, earned him coverage in the New York Times, Vogue, and on a list of ten masters of the self-portrait along with van Gogh and Frida Kahlo.

When a friend brought Ude’s work to the attention of the Duncans the couple knew they had to learn more about the artist.

“He’s a most unusual, unique human being,” Karen Duncan said.

Robert explained Ude’s singular approach to using self-portraiture “drew me in right away.” 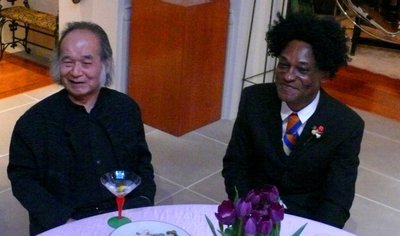 “He develops a fantasy, a fantasy character,” Robert said. “He uses all these beautiful costumes and colors and props to convey this fantasy.”

The product of his collaboration with the couple created fantasy versions of the Duncans.

Late in March a small group of invited guests were given the first viewing of the portrait.

The digitally-rendered image reproduces three couples seated next to one another in a row, each looking both elegant and unorthodox.

Robert is shown dressed once in an elaborate kimono worn over a black shirt with white polka dots. Farther down he wears a knit cap and purple velvet jacket paired with blue jeans splattered with colorful paint. A third Robert looks authoritative in a shiny black power suit and apple green shirt.

The three representations of Karen show her seated between the three Roberts. One dominates the center of the work. The artist wrapped a vividly red feather boa around her neck, topping an ornate purple beaded gown. In another, her personal favorite, Karen sports shoulder-length blond hair, digitally added by the artist.

“I don’t have blond hair,” said a delighted Karen. “Ike’ gave it to me and I think I really look good in that!”

At the couple’s feet lies a multicolored tied fabric rug which ordinarily decorates their kitchen floor. The artist completed the work by digitally duplicating a large ceramic bug, one of the couple’s favorite playful sculptures, along the foreground of the picture.

The finished work is huge, measuring ten feet by six-and-a-half feet tall. It now hangs in the Duncan’s living room where a small group of invited guests saw it for the first time late in March. 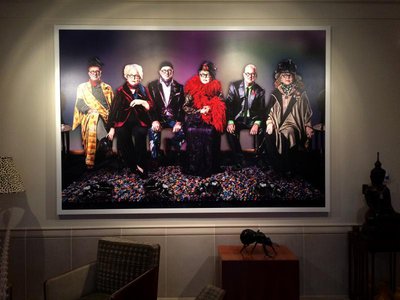 The portrait on display in the Duncan home. (Photo by Bill Kelly, NET News)

Portraits commissioned by patrons of the arts are part of a tradition connecting the 15th Century work of Botticelli with James Whistler in the 1800s and Andy Warhol leading the '60s pop art movement.

While sometimes dismissed as ‘vanity art’ Mason believes there is an important place for these works, calling them “a document of that time.”

Apart from the importance as an acquisition, the hours spent working with the couple to make the photographs provides its own interesting backstory that reveals the exacting process used by Ude’.

When doing any of his portraits on commission, Ude’ likes to “fine-comb” the subject’s closet in search of clothing of a special character. He did not expect a business man from Nebraska to have such an expressive sense of personal style. He variously referred to what he saw in the closet as “impressive,” “colorful,” “daring” and “unexpected.”

“Robert has an immeasurable collection of clothing,” Ude’ said. “I was quite taken aback by it.”

The couple spent more than a day emptying out their closets and dresser drawers.

“We got everything out. It was a disaster,” Karen said, laughing. “Everything was out and then he started putting things together into a look that he wanted you to be.”

Throughout the day the couple were asked to try on different garments paired with different accessories in dozens of different combinations. While the artist never said what specific vision he might have for the mash-ups, the couple sensed he had a specific goal in mind.

“We never put these clothes together the way he did,” Robert said. “They were all our things but when you assemble them in a different way and in a different combination you get a whole different result.”

The evening of the unveiling of the portrait their friends seemed most intrigued by one of duplicate Roberts portrayed. The figure sits with an imperial air, wearing a black-tasseled cap, Doc Marten boots with Union Jack flags on the toes, and an ornate kimono that seems to glow gold.

The kimono was not hanging in the closet but hung on the wall of the Duncan’s bedroom. It had never been worn. It fascinated Ude’.

“He said, can we try that? Sure!” Robert recalled. “We got it down, wrapped it around me and he took a photograph."

Using a garment the couple had acquired as a work of art for their collection seemed especially appropriate, but it also underscored the artist’s philosophy that clothing shapes the people wrapped in the fabric.

“When Robert was in the kimono it’s like he transformed into somebody else,” Ude’s said. “He became a whole different person.”

Robert carries a similar nobility in another, more traditional, portrait created by Ude’. In it the Duncans wear outfits designed for them by another artist, Jun Kaneko of Omaha, on the occasion of Robert being named King of AkSarBen by the state’s social elite.

The unconventional robes and headpiece were an outrageous departure for the historic and staid annual coming-out party. Ude’ added his own anarchistic nod. Karen, perched on the grand piano, is barefoot. 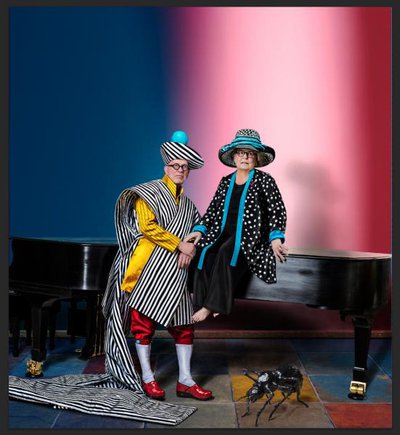 The Duncans, wearing outfits from the AkSarBen Ball, in a portrait by Ike' Edu' (Image courtesy of artist)

That picture now hangs in the couple’s bedroom.

Artist and subject agree it was an open and fluid collaboration that lead to the dozens of photos Ude’ would later use to stitch together the final work. Ude’ said admiringly “Robert gave me the liberty to say listen, just go ahead, pick out something you like and let’s do it!”

“We very much believe in finding an artist and letting him do his thing,” Duncan explained. Karen quickly added, “Why would we hire him if we were going to tell him what to do?”

Prior to the unveiling the Duncan’s were asked what their portrait would tell another generation about the couple who amassed an art collection that could well bear their name.

“I think it’s going to tell them we were a lot of fun,” Karen said.

Editor’s Note: By way of full disclosure, Duncan Aviation is in an NET underwriter.