Tele-psychology with a client in another state can be challenging because of licensure issues — but Nebraska is one of 12 states to have implemented a law that will make it easier.

Across the world, people are self-isolating. Many are working from home and rarely leaving the house. It’s a combination of factors primed to exacerbate mental health challenges.

Luckily, his regular meetings with a therapist moved to video chat really easily. But not all Nebraskans are so lucky – and the biggest challenge isn’t necessarily learning the technology.

"I'm 30 miles from the Wyoming state border," Talbot said. "And I'm not yet licensed in Wyoming because most of my clients from Wyoming come to my office in Scottsbluff."

And if you’re not licensed to practice in Wyoming, you can’t conduct a therapy appointment with someone physically in Wyoming – even if you were working with them before.

From NPR: How To Get Therapy When You Can't Leave The House

Getting a license in another state can be tricky, because the standards are different – and you have to provide all kinds of documentation proving your credentials. 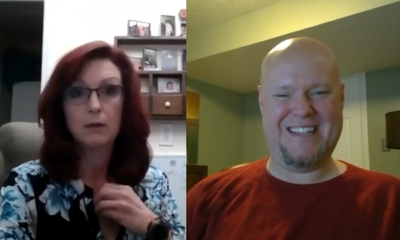 "We don't know how long that's going to take," Talbott said. "Is it going to be several months, or could they please get it done next week because we've got clients that need that."

The pandemic brings new urgency to the issue, but it’s not new. Two years ago, Nebraska lawmakers joined the Psychology Interjurisdictional Compact, or PSYPACT for short.

The goal is to have one governing board that coordinates psychology licensure between participating states. A practitioner will submit a single application, and can then practice with patients in any of the states that are also part of PSYPACT.

"I think nursing paved the way for all of us," said PSYPACT Executive Director Janet Orwig. "They kind of got in all there. They're all the the knocks that had to go with being the first profession to do a compact and the rest of us have very much benefited because of that

There are 11 other states in the pact right now, including neighboring Colorado and Missouri. Licensed psychologists should be able to take advantage starting July 1.

But the need is here now, and Orwig says that’s prompted states to ease some of their restrictions – at least temporarily.

"The problem is now that the lines have been a little blurred between the states, and you're able to practice when those lines go back to being in your, you're either going to have to get a license there or have some other mechanism. And I think we're that mechanism," Orwig said.

Seventeen states have pending legislation that would bring them into PSYPACT, including Wyoming and Iowa.

State legislatures are shut down right now because of COVID-19, but Orwig is hopeful the issue will be a top priority when they return.

"The more we get, the better it's going to be, but even with 12 it's better than having to get a license in 11 other states."

PSYPACT will certainly help with the surge in telehealth needs because of the coronavirus, but the system will last long after the pandemic.