Nebraska Airport Directors are crying foul on the Federal Aviation Administration and Congress saying a new FAA regulation is to blame for a pilot shortage. That shortage is causing a drastic increase in cancelled flights, the consequences of which could be dramatic.

After landing, a small passenger plane pulled up to the terminal at North Platte Regional Airport, and the twin propellers cycled down. The door opened, stairs lower, and 9 passengers made their way down. Inside the terminal, Paul Engler was waiting to board. 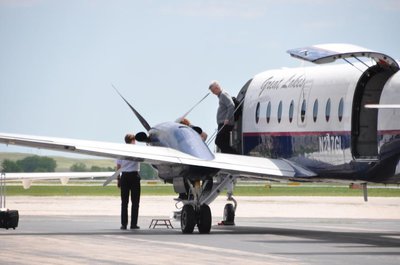 Passengers disembark a plane at North Platte Regional Airport. According to Airport Director Mike Sharkey, Great Lakes Airlines has been forced to remove more than half of the passenger seats on their planes (from 19 seats down to 9) in order for their pilots to comply with an exception to the new FAA rule. (Photo by Ryan Robertson, NET News)

“I’m going to fly from here to Denver and then on to Hamburg, Germany,” Engler said.

Engler, who lives in North Platte, said he was supposed to already be in the air, but his flight was cancelled.

“[The cancellation] kind of messed up my other flights and was actually a pretty big hassle for me yesterday--trying to figure out what I was going to do with my flights,” Engler said.

After his first flight was cancelled, Engler said he would have missed all his connecting flights. Thankfully some last-minute scrambling paid off and he found new flights to Germany, but he still lost a vacation day.

Cancelled flights are a part of flying, but they’re still relatively rare. This past winter, U.S. Airlines cancelled about 75,000 flights due to weather. It was the most on record, but still only about five-and-a-half percent all scheduled flights.

Now, a different kind of storm is blowing, and could start grounding flights in record numbers.

“Our cancellation rate since this all started has been averaging about 55-56 percent, which is totally unacceptable. Industry standard is 1 percent and even that is excessive,” Mike Sharkey, the Airport Manager in North Platte, said. 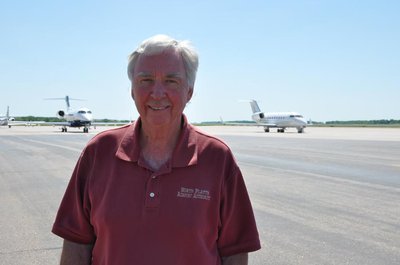 Mike Sharkey is the director of the North Platte Regional Airport. He says since the new FAA rule is forcing so many flights to be cancelled, many of the businesses at the airport (the restaurant, car rental agencies, etc.) are also starting to suffer. (Photo by Ryan Robertson, NET News)

Sharkey has been on the job for 15 years, but says the past year is the worst he’s seen it when it comes to flight cancellations. The reason? Not enough pilots.

According to Sharkey, to understand why there’s a pilot shortage, you need to know the story of Colgan Air 3407, which crashed near Buffalo, New York in 2009.

He showed me a clip on his computer from an hour -long show the National Geographic Channel put together on the crash.

In the video, an announcer explained “the airplane entered an aerodynamic stall, it did not recover.”

The National Transportation Safety Board ruled the Colgan Air Crash was the result of pilot error, which prompted the father of one of the victims to lobby Congress for stricter pilot regulations.

Congress told the FAA to outline stricter rules for pilots. The FAA did, and beginning last August, every pilot and co-pilot flying a passenger plane has to have an Airline Transport Pilot certificate, or ATP.

Co-pilots are also required to have at least 1500 hours of specialized flying in certain conditions, instead of the previous 250.

Mike Olson, director of the Grand Island Regional Airport, said he agrees co-pilots should have more training, but the new rule is excessive. In addition, Olson said a significant number of aviation school graduates now cannot find work when they leave school, because they don’t meet the new requirement.

“I went to a conference two months ago. Some regional airlines were there and they talked about the pilot shortage and how they can’t fill their classes with new pilots. They’re only getting two, four, six or eight pilots at a time, when they’re used to putting through classes of 30,” Olson said. 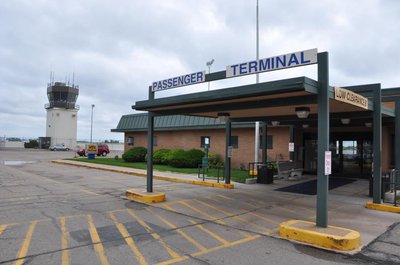 Central Nebraska Regional Airport Director Mike Olson said so far, CNRA has been mostly unaffected by the pilot shortage. However, Olson said he is still concerned about how the pilot shortage will impact travelers flying out of Grand Island. (Photo by Ryan Robertson, NET News)

The pilot shortage at the regional airlines could affect bigger carriers down the line as well, according to Olson, because pilots usually start out at regional carriers before moving on.

“It’s just like baseball, the farm system. You’ve got Class A, Double A, Triple A, and the major leagues are your legacy carriers. Your Americans, United, and Deltas of the world,” Olson said.

Roger Cohen, the president of the Regional Airline Association, said it’s just a matter of time before the pilot shortage starts to impact larger airports. In the meantime, he said the North Plattes and Grand Islands of the world could be in jeopardy.

“The unintended consequences of this is hundreds and hundreds of communities around this country are going to lose their air service because of it, thousands of young people are going to be denied their entry point in their career because of it, and it doesn’t benefit anybody,” Cohen said.

The FAA said the new requirements will improve flight safety and ensure only the best, most qualified flight crews will be in the air. However, it is worth noting both the pilot and co-pilot in the Colgan Air crash would have met the new requirements.

Back in North Platte, Paul Engler boarded his first flight on his way to Germany and departed on time. Before he left, he said with more and more flights being cancelled, he’s a little nervous about another trip he’ll soon be taking to Florida.

“I’ll have to kind of plan that out as I go over the next month, figure out what I’m going to do with that, but I already bought the tickets for it. So we’ll see how it goes,” he said.

Barring a change in the new rule by the FAA, it seems both Paul Engler’s travel plans, and the future of regional airports, will remain up in the air.