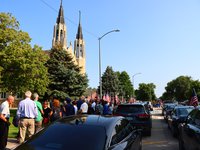 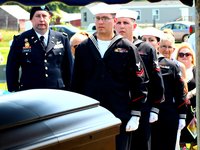 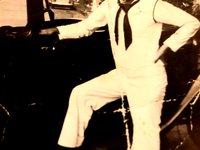 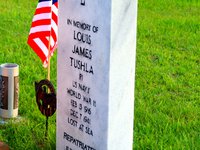 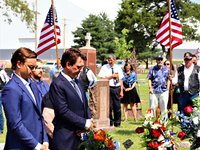 The community of Atkinson, Nebraska came together Saturday to honor one of its own who died defending his country 80 years ago.

Navy 1st class sailor Louis Tushla was 25 years old when he died aboard the U.S.S. Oklahoma during the 1941 Japanese Pearl Harbor attack. Late last week, he returned home to Atkinson with a State Patrol and American Legion motorcycle escort from Offutt Air Force Base.

“People everywhere. Just people,” said Ken Stenka, Holt County’s Veteran’s Service Officer. “Police departments blocking traffic, people standing along the roadsides and there would be farmers standing out in the middle of nowhere with a flag, you know.”

“And there were cards and the things the family has that she held on to hope again, hope that he would come home and he has come home now,” Tushla said.

“I heard about Pearl Harbor and I’ve read the stories,” said Sarah Sell, a third cousin. “And to try to put that together, that this guy died there and that now we finally get to bring him home. It’s hard to put together that it’s real.”

“It makes me really happy to know that they haven’t been forgotten,” McCormick said. “We don’t get to meet with the family members very often but it’s comforting to know they’re not forgotten, they’re not…they’re still missed.”

Navy Seaman Tushla was buried with full military honors on Saturday. A requiem Mass was also led by Monsignor James Gilg, another Tushla cousin, who paid holy tribute to the sailor who died three generations ago.

Today, Louis Tushla rests in a quiet cemetery on Atkinson’s west side. His return symbolic, said cousin Gerard Keating, of the extraordinary lengths America makes to bring every service member back home.

“Back to freedom. That’s what makes our country so special. We live for it. We fight for it. Some die for it,” Keating said.