By Emily Guerin, Inside Energy

Ethanol has made a mark on the Midwestern economy and landscape. For farmers, it provides extra competition for the grain they grow. But in some places ethanol has also pushed land into row crop production that may be better left to grass.

The Environmental Protection Agency proposed tweaks last week to the amount of ethanol the oil industry has to blend into our gasoline. That’s called the Renewable Fuel Standard, or RFS, and the EPA wants to scale it back over the next couple of years.

It has arguably been most successful at meeting that first goal. Stutsman County, N.D., is a great place to understand why.

Central North Dakota didn’t really used to be corn country. It's too rocky, hilly and dry — although there are small ponds all around that are difficult to drive farm equipment around. Denny Ova lives here on a cattle ranch. He has farmed and ranched most of his life, but never really planted much corn until eight years ago.

Congress passed the RFS in 2007, creating an instant market for corn to be made into ethanol. Between 2007 and 2013, the price of corn almost doubled. During that time, the amount of corn planted in Stutsman County increased by over 50 percent. For people like Denny Ova and his neighbors, it was great news. 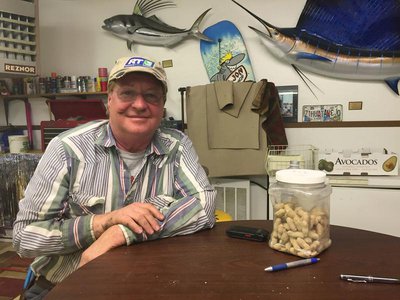 Farmer and rancher Denny Ova in his garage in rural Stutsman County, N.D. (Photo by Emily Guerin, Inside Energy)

"[There's a] lot of buildings going up, a lot of new equipment sitting out there," he said. "People are happy."

Ova included. The walls of his garage are decorated with taxidermy deer he's bagged on hunting expeditions and fish he's caught on annual fishing trips to Mexico.

The ethanol industry estimates it contributes $640 million to North Dakota’s economy, and billions more across the Midwest. Tom Lilja, head of the North Dakota Corn Growers Association, says a lot of that is a direct benefit to farmers, who can receive more money for their corn when they sell it to ethanol plants.

"A farmer in the past would go to the elevator and take the price," he said. "Well now, he can look at an ethanol plant bid. And he can make these guys compete for their price."

Besides acting as a stimulus to rural America, the RFS was also meant to reduce U.S. dependence on foreign oil. Back when the RFS was crafted, in the mid-2000s, we were at war with Iraq and importing more oil than ever. Corn was cheap and plentiful, so why not refine some of that into ethanol right here in the United States? Ethanol did reduce our dependence on foreign oil, says Bruce Babcock of Iowa State University, but something else worked even more — fracking and horizontal drilling.

Whether the RFS achieved its last goal, to be a less carbon-intensive fuel than gasoline, is even harder to parse out.

High corn prices meant many farmers took grassland out of federal conservation reserve programs, or CRP, which pay farmers not to plow, and did just that. Denny Ova wanted to keep his grass, but it didn’t make business sense. 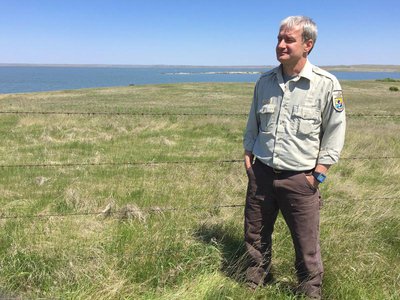 Between 2008 and 2012, almost 6 million acres of grassland around the country were plowed under, according to

a University of Wisconsin-Madison study

. Plowing up grassland releases carbon dioxide from the soil. Accounting for that, some researchers say corn ethanol is not as green of a fuel as initially thought.

Losing grasslands is also bad for wildlife. The Chase Lake National Wildlife Refuge's 10,000 acres of prairie in Stutsman County are a haven for migrating birds looking for a place to rest, or nest, in the increasingly plowed-up landscape. Neil Shook, the refuge manager, says the area looks completely different than it did five years ago. Now, cultivated fields line the roads where before grasslands stretched for miles.

One Sunday morning a few years ago, Shook was out for a drive when a neighbor flagged him down. The neighbor, an older man named Roger, said he had been offered $90 an acre to turn some of his grassland into cropland. Shook begged him not to.

He took Roger out to the land in question to show him native flowers, grasses, and old tipi rings, evidence of earlier inhabitants. But then, later that summer, he saw smoke rising from the field.

One way to make ethanol more environmentally friendly is to make it out of something besides corn. Indeed, corn ethanol was intended to be a bridge fuel to "cellulosic biofuels” made out of wood, grass, or other plant parts. But cellulosic ethanol, as it is called, has yet to fully take off. U.S. plants last year produced just one-fifth of the cellulosic ethanol called for in the RFS.

To understand why, check out part two of our series on the RFS on Tuesday.

This story was produced by Inside Energy