Increasing minimum wages, keeping students out of legal trouble, keeping people out of jail, and making it easier to pay for college were among subjects discussed in the Legislature Thursday.

The state’s minimum wage, currently $9 an hour, has not increased since 2016. Under a proposal by Sen. Dan Quick, it would be raised every year, starting in April, 2020, by the average increase in the consumer price index for the previous five years. The new wage would be rounded to the nearest nickel, and annual increases would be capped at three and a half percent.

Quick said his proposal would smooth out adjustments and keep wages up to date. “Instead of waiting until we have to make a big adjustment down the road, this would just kind of keep it up with inflation. The increases probably won’t be anything really huge, because a cap of three and a half percent isn’t going to be overwhelming for the employer. And I think it would probably help the employers as well, and then keep the employees up with inflation,” Quick said.

Meanwhile, Sen. Megan Hunt introduced a bill to raise wages for people like waiters who are exempt from the general minimum wage because of tips they receive. Currently, their minimum wage is $2.13 an hour. Hunt’s bill would raise that to $3.60 an hour next year and $4.50 an hour by 2021.

Pansing Brooks said she’s trying to prevent students getting into more trouble in the future. “What I am trying to avoid is the increasing school-to-prison pipeline,” she said.

She said a tour of schools around the state last year shed light on problems with the use of school resource officers, or SRO’s. “At one community they said ‘We have SRO’s and we have been told that we must arrest for every schoolyard fight,’” she said.

On a related matter, Sen. Matt Hansen introduced a bill requiring law enforcement personnel who take a juvenile into custody to immediately notify a parent or guardian, and to inform the juvenile of his or her right not to answer questions.

Criminal justice was also a focus of Nebraska Supreme Court Chief Justice Mike Heavican’s State of the Judiciary speech to the Legislature Thursday. Heavican talked about the benefits of using specialized problem-solving courts, such as drug courts or veterans’ courts, that try to be proactive in preventing future problems. 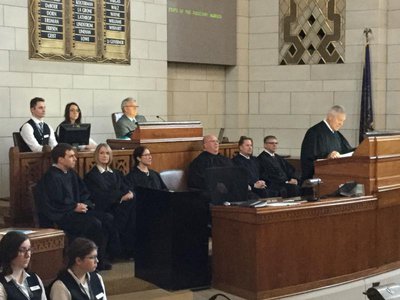 Heavican said that approach could be expanded to help many people who are in jail because of mental health problems, but that’s not happening.

“Our local partners in county government are interested in establishing mental health courts to help alleviate that problem. We have stopped all efforts to expand problem-solving courts into the area of mental health courts, however, because we have no extra resources,” he said.

Adam Jorgensen, coordinator of the state’s problem-solving courts, said it would cost about $660,000 a year to start one. He said so far, no proposal has been submitted to do so, but discussions are continuing.

And, efforts are underway to make it easier to save and pay for college. State Treasurer John Murante, whose office administers the state’s college savings program, announced a package of proposals with an ambitious goal, “that every kid in the state of Nebraska be able to graduate from a two- or four-year college debt-free, and that they do that through savings and investment.”

The package includes a proposal by Sen. Lou Ann Linehan that would open a college savings account with $100 for every child born in the state. Murante said no tax money would be used for the program, and he would solicit donations.

Sen. Anna Wishart will introduce a bill matching every dollar contributed to an account with one or two dollars, depending on family income. Sen. Andrew La Grone has legislation raising tax deductions and letting anyone contribute to anyone else’s account. Sen. Brett Lindstrom will introduce a bill giving employers tax credit for contributing to employees’ accounts. And Sen. Justin Wayne has legislation to ensure no one loses state aid if their employer contributes.

Asked how much all that would cost, Murante predicted the expenses would be “modest,” and would not hit all at once, since it would take time for people to become aware of the changes.