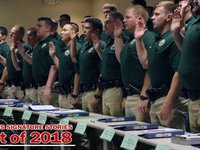 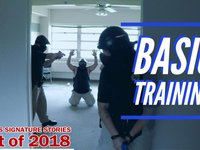 It only took a few hours of basic training at the Nebraska Law Enforcement Training Center to understand the following 16 weeks will be a physical and mental challenge. 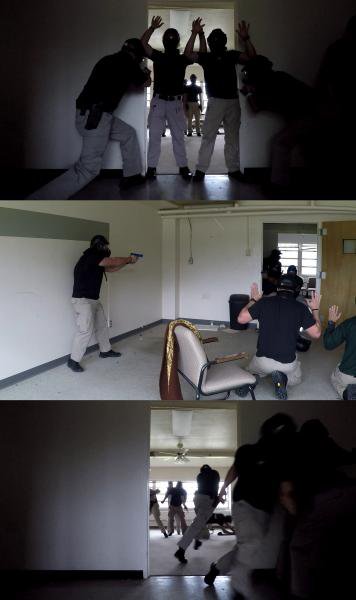 The military-style uniform inspections. Scrambling up a five-foot tall wooden box. Facing off with an impenetrable book of Nebraska laws.

That was day-one of the 200th basic training class.

Brenda Urbanek, the center’s director, thinks having 200 classes since the center opened in 1972 “is a milestone.”

“We do three to four trainings per year,” Urbanek noted. “The State Patrol has been in effect since 1937 and they are in their 59th camp. We have been in existence since 1972, and we are in our 200th class.”

By training hundreds of officers employed by dozens of law enforcement agencies across the state the NLETC became a significant force in shaping the direction of police work in Nebraska.

In 1969 the Nebraska Legislature passed a law requiring specific standards and training for all law enforcement officers. The bill also provided funding for a training center. Previously there had been no statewide training requirements for police in Nebraska. Only 12 percent of the officers in the state received any formal instruction from their departments. Some police chiefs and sheriffs objected to the state mandating standards for local agencies.

Urbanek, whose career spans 35 years, recalls when she started in law enforcement “it was not an uncommon event to hear people say, ‘Yeah, they hired me Tuesday, gave me the keys to the car, and a gun, and a badge, and told me to go drive around.’”

Today the state patrol and the police departments in Omaha and Lincoln teach their own. Officers from the rest of the state must report for basic training at the Law Enforcement Training Center within a year of being hired.

“I think if you were to ask some of the agencies, we are a necessary evil,” Urbanek said. “They have to send our people to us, but when they get their people back, they are pleased with the product that we give them.”

After five years as an instructor, Mike Kerby sees the training as a reckoning to be faced by the 40 to 50 newcomers in each class.

“You see excitement in their eyes, but they still have that questioning, ‘Is this what I want to do and is the direction I want to go?’”

And for those who decide along the way they may not want to be an officer or deputy?

“This is the place to decide that,” Kerby said. It’s better to make that choice “in the academy rather than once they get in the field.”

Instruction touches on every aspect of police work.

Pursuit driving, firearms, using handcuffs and how to disarm a suspect are all included in field skills.

Familiarity with state law and professional ethics are on the homework list. 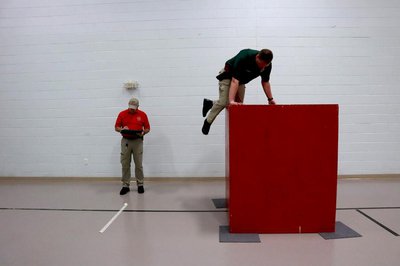 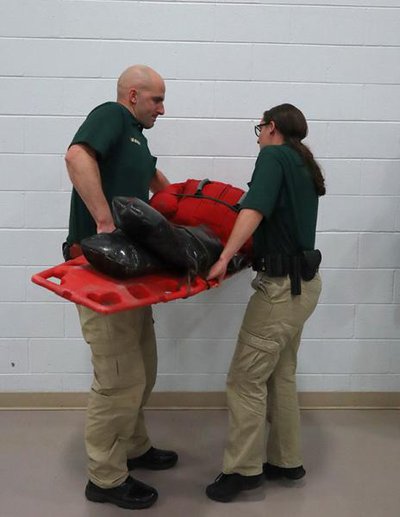 Early in basic training, officers must climb atop a five-foot box and carry a heavy stretcher during an the assessment of their physical fitness. (Photos by Bill Kelly, NET News)

Responding appropriately to domestic violence, child abuse, and death investigations prepare new officers for some of the most difficult aspects of their work.

The objective, according to Urbanek, is to produce an officer or deputy “who has demonstrated minimum competencies to go out and start to learn how to do this job.”

She emphasizes there must be a commitment from their home agencies and the officers themselves to continue their own education and advance their skills.

“By no stretch of the imagination are they ready to go all by themselves,” Urbanek said. “We've just given them a taste, and now it's up to the department to continue to develop that officer the way that they want them to.”

The 200th class is one of the smallest in recent years. That likely reflects the difficulty agencies have recruiting new officers. There are only two women in the current class and ethnic diversity remains a hiring issue for departments across the state.

The new officers traveled varied paths leading to a career in law enforcement.

Ben Shelbourn of Valentine decided “things weren’t working out” for him on the family ranch and started working at the jail in Cherry County. He saw the job opening in Rock County and applied.

Betty March was the secretary for the Chadron Police Department. As a part of the hiring process she “got to watch everyone go through the testing and everything and I was really just thinking, ‘This is something I could do!’”

With no previous experience with police work, Eric Barton was hired as a deputy for the Hall County Sheriff’s Department. He wants a job where “no day’s the same (and) you never know what you’re going to walk into” adding with a smile “just an adrenaline rush.” 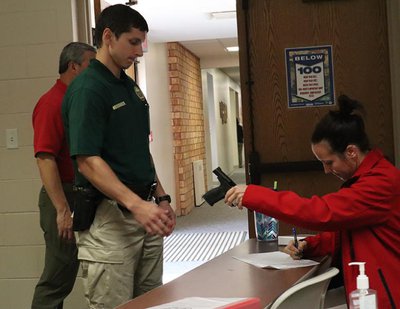 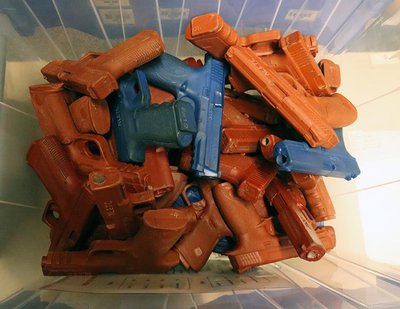 Instructors repeatedly warn inexperienced officers a shot of adrenaline may not bring about the best results. In several role-playing drills instructors watched closely for signs trainees, over-reacting to high-pressure situations, are making unwise and potentially dangerous situations. The blunt sharply-phrased critiques can sting.

In the first week, there’s a “stress inoculation” session serving a dual purpose. Students get the better hint of how they will be assessed. Instructors get a benchmark to gauge a new officer's skill level by which to measure improvement at the end of the training.

“Today it is not about how good are they; what do they know; what can they do,” Urbanek explained. “It's about what do they bring to this.”

The assessment, she says, can be ruthless in a way that is necessary for their own safety and the safety of the communities they will be serving.

“If they don't have the heart (for police work), I don't care how much training we give them, it's not going to be there when they need it out on the street.”

Because, as instructor Kerby summarized, society expects its police force “to be more knowledgeable” than what many people might have “traditionally thought of as a law enforcement officer,” the center is re-thinking the approach to some aspects of the training regimen.

"They seem to be expected to be more sympathetic and empathetic,” Kerby said. “They are fitting a whole different role than I remember as a law enforcement officer.”

This story was part of the NET News Best of 2018 Signature Stories. It originally aired September 28, 2018