Midwest Hemp Is Still Getting Its Footing, but Growers Aren’t Giving Up Yet

So it was all the more heartbreaking when Kata and his colleagues had to burn it all down because it didn’t meet the federal tetrahydrocannabinol (THC) threshold.

“I have a newborn baby, so I spent all summer, instead of playing with her, I was weeding a field,” says Kata. “And after all that, it’s like, that's cool, just going to light that on fire.”

Hemp production was legalized under the 2018 Farm Bill, and while it left regulation up to individual states, it did mandate that compliant hemp test at or below 0.3% THC, the psychoactive ingredient in cannabis. Kata’s crop tested twice the legal limit.

And he wasn’t alone. About 13% of Iowa’s hemp crop came in above the legal limit. In Missouri, it was about 9%.

Many of the challenges farmers faced this year can be chalked up to the fact that, for many states, this was the first year hemp production was legally permitted.

“Any time you start something up, I think you have some highs and some lows and some things you didn't see coming at you,” says Robin Pruiser, who oversees Iowa’s hemp program for the state’s Department of Agriculture.

She says in addition to growing noncompliant hemp, farmers struggled with other issues in the field, including pests and weeds. For first-time growers, Prusiner says the amount of sheer manual labor can become daunting.

“[It’s] like having a tomato garden that's five acres or however big, compared to just your little kind of more typical garden in the backyard,” she says.

What’s more, because the industry is so new, Pruisner says there’s a lack of uniform and stable genetics available within the seed supply. That makes it hard for growers to predict exactly how the crop will turn out.

“If you think about walking out into a cornfield, every plant looks like a carbon copy of the plant beside it. That is a very uniform genetic set that's out there,” Prusiner says. “With hemp, it's very common when it's been planted from seed to walk out into a field and you see plants that don't resemble one another at all. Some are tall, some are short, some are bushy, some have a different coloration.”

That variation also applies to the plant’s chemical composition and can make it hard for growers to predict exactly how the crop will turn out. It’s another reason Pruisner guesses some of Iowa’s crop “went hot,” or tested above the legal THC limit.

For hemp farmers in Missouri, 2020 was also the first go-round.

“I think a lot of it is just understanding the crop and how it grows and what the requirements are,” says Alan Freeman, Missouri’s Industrial Hemp Program Administrator. “Developing those best management practices is something that we'll probably see over the next few years as more research is done and producers get better at what they're doing.”

Like hemp growers in other parts of the Midwest, Freeman says Missouri farmers struggled with pest and drought issues. However, he says they largely remain optimistic about its future in the state.

For many growers, the hurdles didn’t stop once the hemp was harvested.

Most hemp grown in the Midwest is for cannabidiol (CBD), the non-psychoactive ingredient found in the cannabis plant. Extracting the CBD requires a processor, but because the industry is still so new, there’s a severe lack of licensed processors across the region.

Last year in Illinois, 644 growers licenses were issued, but fewer than 200 processors were licensed according to the Illinois Department of Agriculture. This year that gap has narrowed slightly, with 800 growers licensed and 364 processors.

“We're looking to get a number of them online in the next year or so,” says David Lakeman, Manager of the Division of Cannabis Regulation at the Illinois Department of Agriculture.

But some more experienced farmers have figured out a workaround by acquiring their own processing licenses. 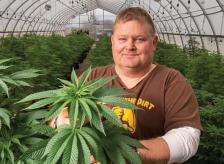 “The CBD that's in our products came off of our farm. We know exactly where it's been. We know exactly how it was raised,” says Andy Huston, who’s been growing hemp in Illinois for three years now.

Because he has dual licenses, Huston can grow the hemp, extract the oil himself and then sell different infused products on site. But processing requires a good deal of experience and investment -- which few farmers are equipped with.

That’s why Robin Pruisner with the Iowa Department of Agriculture recommends growers sign a contract with a processor before planting. She says the quick scale-up of hemp farming hasn’t helped.

“All of a sudden we’re producing a massive amount of hemp,” she says. “We have not seen that level of increase with our processing capacity.”

‘It’s too good not to be around’

Andy Huston says he has a lot of happy customers.

“People that have had aches and pains and arthritis, and they've gone to the doctor, and they've been on medication, and they haven't been very successful,” he says. “They'll try some of our products, and they'll say they haven't had anything that's worked that good before.”

Currently, CBD is only allowed in certain products approved by the Food and Drug Administration (FDA), including lotions and food products. However, they’re soon expected to come out with guidelines for infusing CBD into additional products.

Once that happens, Huston says he believes demand will grow exponentially. He says hemp is here to stay.

Huston says hemp grows really well here — even better than in some Western states where hemp is big, like Colorado and Oregon.

“Hemp likes Illinois’ climate. There's no getting around that,” he says. “We don't have to worry about irrigation nearly as much as [Western states] do.”

“I think that within the next 5-10 years, hemp will be, in terms of the dollar amounts, one of the top three agricultural exports of the state of Illinois,” he says.

He has “bottomless faith” in the Illinois farmer, and along with hemp’s medical and industrial potential, he says its future is bright.

Harvest Public Media is a reporting collaboration focused on issues of food, fuel, and field. Harvest covers these agriculture-related topics through an expanding network of reporters and partner stations throughout the Midwest. Follow Dana on Twitter: @DanaHCronin

Carbon Is a New Cash Crop for Some Farmers
Why Even Corn Can Get a Bad Night of Sleep
Should Ethanol Go Back to Business as Usual After COVID-19?