Midwest farmers raise millions of chickens, hogs, and cattle. That many animals produce a lot of milk, meat, and manure. But some little-known insects can put that manure to good use. All they want in exchange is some dung for dinner.

Wearing latex gloves and digging through a sloppy patch of cow poop on his farm in central Missouri, farmer Ralph Voss spotted his target.

“Okay, here we go!” he said excitedly, plucking out a shiny insect the size of a sunflower seed – a dung beetle.

Despite their disgusting homes, dung beetles are worth searching for – it has been estimated that they save U.S. farmers hundreds of millions of dollars a year. Some researchers suggest that they could be worth even more, and are searching for new species meant to maximize that value.

When dung beetles bury manure in the ground, research shows that they can increase grazing area, improve soil nutrients and water absorption, and even reduce greenhouse gas emissions. Perhaps most importantly, they prevent parasites and flies from using the dung to reproduce. 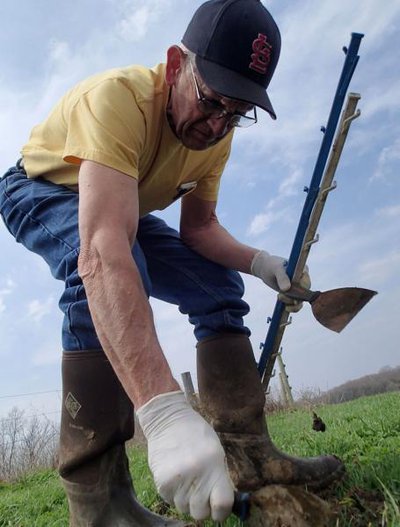 Farmer Ralph Voss digs through a fresh cow pie on his farm in central Missouri, looking for dung beetles. Large dung beetle populations can remove manure in a matter of hours. (Photo by Jacob Grace for Harvest Public Media)

Most of the dung beetles in the Midwest, however, work too slowly to meet farmers’ needs, and faster-working dung beetles commonly found in other parts of the U.S. often can’t survive Midwest winters.

Wayne Bailey, a researcher at the University of Missouri, is planning a project to research and breed dung beetle species for Midwest farmers. He believes dung beetles are an untapped resource that, with a little help, could join earthworms and honey bees as major contributors to Midwest agriculture.

“What we really need are dung beetle species that fill in the whole season,” Bailey said. “So we would like to build those populations that have adapted to the colder winters to build up the numbers and spread [them] across the state.”

Dung beetles get their food by sucking the juices out of fresh dung. Though they are best known for rolling away dung in a big ball, only a small percentage of dung beetles are actually true “rollers.” Most beetles bury their dung in underground tunnels for their offspring to eat. According to Bailey, healthy dung beetle populations can make a cow pie disappear in a matter of hours.

But dung beetle populations have been declining for decades – and it’s partially thanks to the very farmers they could be helping out.

Farmers often treat their livestock with pesticides that kill internal parasites and prevent pests from using livestock manure to breed. While good news for livestock, it is bad news for dung beetles, which depend on manure for food and reproduction. These treatments have been contributing to dung beetle decline, according to Bailey.

Bailey is trying to spread the word about parasite treatment methods that are less harmful to dung beetles. Large dung beetle populations can bury dung before parasites are able to breed in it, reducing the need for such treatments.

A number of other countries have already started programs to promote dung beetles.

“I would like to see a federal program that would actually bring them into the U.S. and introduce them, just like Australia has,” Bailey said. 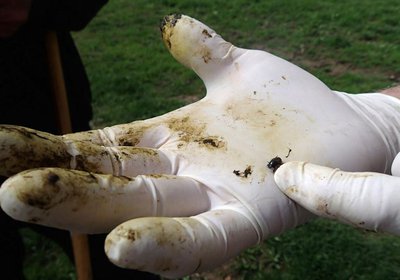 Voss points to an Aphodius fimetarius, a common dung beetle on his farm. “I've seen as high as six in a pie,” Voss says of this species, “but they're not thick enough to get the job done.” (Photo by Jacob Grace for Harvest Public Media)

Like farmers in the Midwest, Australian farmers raise livestock such as cattle and sheep that originated in other parts of the world. Native Australian dung beetles were not adapted to handle this unfamiliar dung. As farming increased, parasites and pest flies became a serious problem for livestock and people alike. Australia

in the late 1960s, and the beetles have been credited with greatly reducing these pest populations by burying manure below ground.

Introducing foreign species, though, is a tricky business.

After limiting parasite treatments in his cattle, Voss says he has seen more and more of the beetles on his farm.

“Believe it or not,” Voss said, “here in central Missouri we've got a lot of dung beetle fans.”