Free trade has become a bad word on the presidential campaign trail. Both Democrats and Republicans are arguing against deals like the pending Trans-Pacific Partnership. But there’s one group that still largely supports the TPP: farmers.

Turn on the TV and you can barely escape it: presidential candidates on both sides of the aisle deriding free trade agreements, like the Trans-Pacific Partnership. The TPP is a bum deal that will hurt the U.S. economy and especially low-wage workers, according to politicians from Donald Trump to Hillary Clinton.

But if you venture into the Midwest and ask a farmer about the TPP, you’re likely to get a different answer.

“This pending TPP trade negotiation, to me, is hugely important for agricultural commodities, but specifically for beef,” said Mike John, a cattle rancher in Huntsville, Mo.

John, along with many Midwest farmers and ranchers are bucking the political trend to dog the TPP. A coalition of more than 200 hundred agriculture groups recently drafted an open letter urging congressional leaders to approve the deal, saying the trade deal will help U.S. farmers stay competitive in an increasingly crowded world market.

Free trade agreements remove tariffs on products we import, but also on food grown here that we export to other markets. That opens the door to get more beef, soybeans and rice into other countries at more competitive prices.

John says the TPP could ultimately put money in farmers’ pockets by giving them more customers in Asian countries with a taste for American beef.

NPR’s special project A Nation Engaged: listen to NET Radio all week for more stories from NPR about how candidates and voters think about trade. 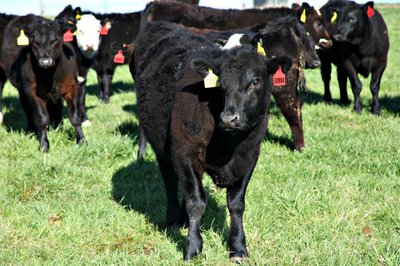 Beef producer Mike John’s calves were born last fall and weaned during the winter in Missouri. He’s hoping Asian consumers will be able to eat more of his beef if the Trans-Pacific Partnership trade deal is ratified. (Photo by Kristofor Husted, Harvest Public Media)

“The Asian markets are showing a huge increase in demand for beef,” he said. “In particular, the grain-fed U.S. beef is highly prized in places where that beef demand is growing.”

The 11 countries along the Pacific Rim that are parties in the TPP already take in more than 40 percent of American agricultural exports. That’s worth a whopping $63 billion, according to the U.S. Department of Agriculture. The department says the TPP could be worth an additional $3 billion to U.S. farmers.

Many beef producers, like Mike John, want to see the TPP ratified because it is designed to cut tariffs in countries such as Japan that historically have been highly protective of their domestic markets.

“So it's not necessarily that we need to get into those markets, we just need to have fair access so that we can compete with the other global suppliers of beef,” John said.

Indeed, agricultural policy analyst Julian Binfield at the University of Missouri said not sealing the deal could leave U.S. farmers at a global disadvantage.

“If TPP is not signed, then some other countries might write their own agreement,” he said. “Maybe it’s partners in the TPP like Australia and New Zealand – they’re writing bilateral agreements all the time. Maybe they get expansion.”

That could actually mean less access overall for U.S. producers.

The other issue casting a long shadow over TPP negotiations: China. China is not a part of the trade deal. But pro-TPP interests say agreements like this one prevent China from setting global trade rules in its own interest.

“In terms of the U.S.’s overall strategic position, I think that China is a massive power that they probably want to make sure they impose their own (rules) or have some say in their own rules and don’t let China dictate too much,” Binfield said.

All of this is not to say that all farmers are campaigning for the TPP. Despite their current advocacy for the trade deal, none of the country’s largest agriculture trade groups call the TPP an unmitigated victory.

The National Farmers Union actively opposes the deal. The organization of mostly smaller farmers contends that the agreement would hurt the broader economy, which could spell trouble for farmers.

Johnson said he’s worried that free trade deals make it more likely that big companies will move jobs overseas. That can hurt the U.S. market for food and, in turn, hurt farmers that depend on off-farm income. He’s worried we import more than we export and feed the ballooning trade deficit.

“It it grows, if it gets worse as a result of this agreement just like it has as a result of earlier agreements, then what have we gained? We just haven't made a meaningful step forward,” he said.

President Obama championed the TPP and set his sights on getting the deal approved before he leaves office. For that to happen, Congress will have to approve it, but neither the Senate nor the House have set a date for review.