One of the smallest states in the country is sending shock waves through the food system and farm country in the Midwest. A controversial law taking effect in Vermont requires special labels on foods that contain genetically-modified ingredients.

On this sunny, summer morning in late June, Ronnie Russell is “windshield farming.”

Driving from field to field in his Ford pick-up, he can see that his corn is about to tassel, his soybeans are mostly weed-free, and white butterflies are floating above the alfalfa.

All three crops, adding up to about 1,500 acres, are grown with genetically-engineered seeds, a technology Russell views as a boon to farming.

“For me on my farm, it’s been a huge benefit,” he says. “When you look at the future of sustainability and being able to feed a hugely growing world, we’ve got to have ways and technology that we can utilize to improve. Because there’s no more land being made.”

Since GE crops came on the U.S. market 20 years ago, use has skyrocketed, with 93 percent of soybeans and 85 percent of the corn crop planted in these seeds according to the USDA. Russell says the new technology allows him and most American farmers to protect their crops from insects and weeds, preventing the losses their fathers had to put up with.

VIDEO: What are GMO labels?

What’s behind the Non-GMO label?

A front row seat to the GMO debate 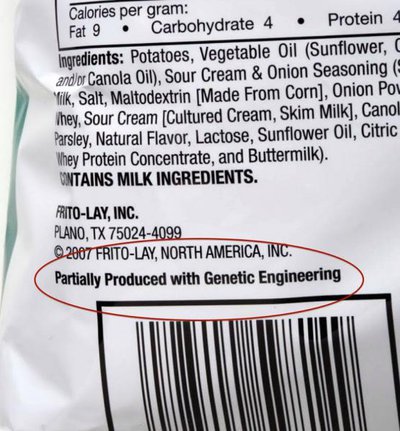 Consumers, environmentalists and health advocates don’t see it that way. They are cheering as Vermont becomes the first state in the country to require labels on food products to state whether there are genetically-modified organisms (GMOs) in the ingredients. The law officially took effect July 1.

Because Congress couldn’t agree on a plan to set a national GMO labeling requirement, Vermont’s law becomes the de-facto national standard. That has farmers like Russell worried that a label informing a consumer that a product contains GMOs will be read as a warning and will stigmatize his crops.

“It’s stigmatized in that (people think) if it’s GMO, it’s bad for you,” he said.

Jill McCluskey, a Washington State agricultural economist, has been studying the labeling issue for more than a decade. McCluskey says she’s found that consumers may view the GMO disclosure labels much like the surgeon general’s warnings on cigarette packages. That’s despite a recent National Academy of Sciences study showing that GMO crops are safe to eat.

“I think if consumers see the label that this contains genetically modified food, and that’s a requirement by the U.S. government, they will feel it’s something they should avoid,” she says.

Despite that potential for negative reaction, the government is acknowledging that people want to know about the presence of GMOs in their food, with some polls showing it as high as 90 percent. The U.S. House passed a bill last summer that set a voluntary standard – but it also banned states from enacting their own labels and was seen as a direct hit to the Vermont law.

“Here in Vermont we’re really excited to see our law finally going into effect after the two years since we passed it when this has been challenged by both the courts and Congress,” said Falko Schilling, a consumer protection advocate with the Vermont Public Interest Research Group.

The bill will require companies to place a GMO disclosure label on their products, and gives companies three options: an on-package label, a USDA-developed symbol, or an electronic code consumers can scan with their smartphones.

Roberts is selling the bill as offering options, preempting Vermont’s “dangerous” law and exempting meat products. The proposal faces its first test in the Senate next week.

Supporters of labeling like the Environmental Working Group are opposed to the Roberts-Stabenow bill, saying the disclosure through an electronic code like a QR code is something most Americans have never used.

Sen. Bernie Sanders, the Vermont Democrat, has vowed to kill the bill, saying it’s nothing more than a preemption on what Vermont and other states have done.

“We’re calling on Congress to say if they’re going to be putting forward a national labeling standard it needs to be one that gives people labels that humans can read and is at least as strong as Vermont’s law,” Schilling said.

A board member of the Missouri Soybean Association, Ronnie Russell says his group supports the compromise plan. He likes the use of the QR code because he says it could give consumers even more information just by using their cell phones in the store.

“We’re not against labeling,” Russell says. “But what we want to see is a standardized labeling that is true, scientifically, fact-based information.”

Food manufacturers, once opposed to labeling, also support that bill and hope Congress can get it passed in the next month, before the grace period is up on Vermont’s law on January 1, 2017. But many companies are hedging their bets. Big food companies, including Lays, Campbell Soup Co., Kellogg's and General Mills, have already started offering GE ingredient information on their packages.