The stage is set for Nebraska lawmakers to debate legalizing medical cannabis next week. And promoters of a big tax and school spending bill are proposing change to try and get the state’s largest school districts to support the plan.

With little discussion, the Legislature’s Judiciary Committee voted Friday to send Sen. Anna Wishart’s medical marijuana bill to the full Legislature for debate. Afterwards, Wishart said her reaction was one of “pure joy.” She recited some of the many benefits supporters claim for the drug. “There is evidence that cannabis helps in many medical conditions such as multiple sclerosis, Parkinson’s, people who are battling cancer, and on chemotherapy or battling AIDS and undergoing a kind of treatment where they cannot keep their weight because they have no appetite,” she said.

The proposal lists two dozen medical conditions to qualify for medial cannabis, ranging from terminal illness to severe or chronic pain lasting more than three months that is not adequately managed by non-opioid medications. Patients would have to get written certification of their condition from a physician, nurse practitioner, or physician’s assistant. 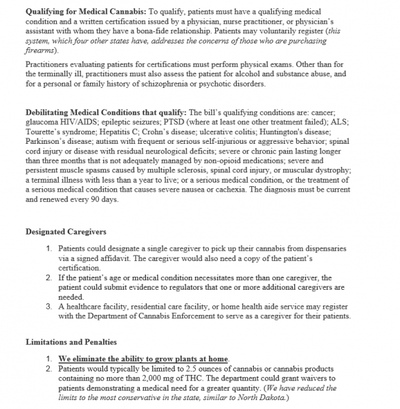 Wishart said the bill also addresses concerns -- raised by some gun rights groups -- that a state registry of patients could be used to take guns away from people who have to sign a federal form asking whether they possess or use marijuana. The registry would now be voluntary, but people not wishing to register would have to present their medical certification to get the drug.

The bill would create a Cannabis Enforcement Department to oversee cannabis growing operations and dispensaries, which could be banned by local governments. The bill would not allow patients to smoke marijuana, but they could use some vaping systems.

The Judiciary Committee voted 5-1, with one abstention and one member absent, to advance the bill. The lone ‘no’ vote came from Sen. Julie Slama. Slama referred to the drug’s status under federal law in explaining her opposition. “Marijuana is still a Schedule One narcotic, and until that changes we have no business as a state legislating it to be medicine,” she said.

According to the National Conference of State Legislatures, 34 states and the District of Columbia have so far legalized medical marijuana.

Judiciary Committee Chairman Steve Lathrop said if Nebraska is going to legalize medical marijuana, it’s better to do it with a bill like this. “This one has been tightened up way more than what we may end up with if this is unsuccessful and then we end up with a petition initiative, put it on ballot and people vote for it,” he said.

If the Legislature doesn’t act, Wishart is also supporting a popular initiative to legalize medical cannabis that could be on the ballot next fall. The Legislature is scheduled to debate her bill this coming Wednesday.

Also Friday, senators backing changes to how the state taxes and pays for schools said they were tweaking their proposal to try and gain support from Nebraska’s largest school districts. The Greater Nebraska Schools Association represents those districts, which stretch from Omaha to Gering and serve about two-thirds of the state’s students. 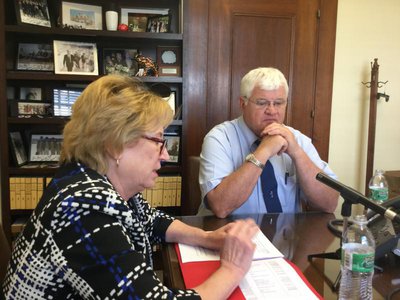 Sen. Mike Groene, chairman of the Legislature’s Education Committee, said he’s offered to tweak the proposal to let school boards increase property tax levies if state aid falls short of what’s promised, and to let schools keep some of the extra money they would get if valuations increase. Revenue Committee Chair Sen. Lou Ann Linehan and Groene were asked if that was enough to get the big districts to endorse their plan. “We’re still negotiating,” Linehan said.

Greater Nebraska Schools Association Executive Director Rob Winter said Friday afternoon he’d just received Groene’s proposal and needed to meet with his board before saying if members now support the proposal. But he said schools are wary when the Legislature promises increased state aid. “School districts across the state have watched our resources go up and down. And of course, we know that one Legislature cannot bind another. So it’s pretty difficult to say ‘We’re going to guarantee this for the next ‘x’ number of years,’” he said.

Meanwhile, Linehan and Groene, who had once talked about flying around the state to promote their plan, had scaled back to driving to Lexington, Kearney, Norfolk and Columbus to meet with media representatives.

Groene said he’d be right behind Linehan. “I’m going to be watching Sen. Linehan’s license plate to make sure I make the right turns,” he said.

“And he’s going to have to be looking at a rental car, because when I got in my car this morning, the battery was dead,” Linehan said, laughing.

Whether that’s an omen about the fate of the plan, or whether Linehan and Groene’s changes will jump-start its chances, may become evident in the coming days.