A plan introduced in the Legislature Wednesday and supported by farm and education groups would raise sales, cigarette, alcohol and other taxes to lower property taxes.

The tax plan, introduced by Sen. Tom Briese, would be a major shift of the way government is financed in Nebraska. “In a nutshell, we’re accessing various revenue sources to utilize those for property relief,” Briese said.

The plan introduced Wednesday would raise sales taxes by half a cent. It would increase cigarette taxes by $1.50 a pack. It would raise taxes on alcohol – on beer, for example, by $1.07 a gallon. It would end sales tax exemptions on items ranging from candy and soft drinks to repairs on motor vehicles and homes. 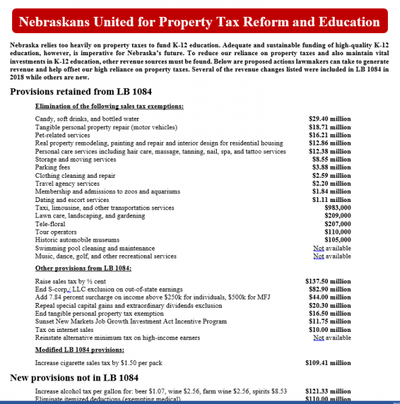 All told, it would raise an estimated $783 million dollars. Of that, about two-thirds would be used to triple the existing property tax credit, and most of the rest would be funneled to schools. Briese estimated the net effect would be to cut property taxes roughly 15 percent.

While farmers and ranchers have been most vocal in complaining about property taxes, Briese said they affect everyone. ”High property taxes are stifling economic growth across our state. In the case of homeowners, they’re making housing costs exorbitant. When you’re trying to grow your state, one of the key issues in trying to grow your state is affordable housing,” he said.

“High property taxes are not conducive to affordable housing and encouraging young folks to move to Nebraska, or folks currently living in Nebraska to stay here, when our property taxes are so much higher than those taxes in surrounding states,” Briese added. 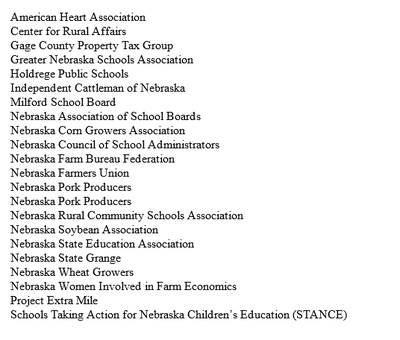 This is the latest membership list for Nebraskans United received by Sen. Tom Briese's office.

But it will face opposition from those against a massive tax shift, including Gov. Pete Ricketts, who telegraphed his stance in his State of the State speech Tuesday. “Any proposal should help control spending, fit into the budget, and cannot raise taxes on one group of people to reduce taxes on another,” he said.

Ricketts’ own proposal would add only about one-tenth as much to the property tax credit fund, and would be coupled with a constitutional amendment limiting school and local government property tax increases to three percent per year.

Another proposal introduced Wednesday, by Sen. Anna Wishart, would say state employees in facilities that operate 24 hours a day could not be forced to work more than a 12-hour shift. Wishart said her bill is motivated by complaints from prison and regional center employees forced to work overtime.

Asked if her bill risks leaving facilities understaffed, Wishart says the state is already running a risk, and needs to figure out how to make things work. “The executive branch has the opportunity now, through labor negotiations, to address the problem with salary and benefits for corrections officers, to find a way that we can reduce the vacancies and turnover that that we’re seeing” in Corrections, she said. “What I’m not willing to do is risk hardworking Nebraskans’ health and their safety by mandating they work 16-plus hour days, multiple times a week.”

Sen. John McCollister has introduced a bill to set aside $200,000 to study the need for electrical transmission lines for alternative energy. McCollister said the state currently lacks capacity. “We simply just don’t have the ability to locate some of the wind farms because we don’t have the power transmission available,” he said.

McCollister acknowledged transmission lines, such as the proposed R-Project through the Sandhills, are controversial. But he said they are needed. And he linked them to the larger issue of climate change. “Climate change is real. And it’s incumbent upon the Nebraska Legislature to create more opportunities for renewable energy. And the transmission line issue is certainly part of that issue,” he said.

Also Wednesday, Sen. Steve Halloran introduced a resolution asking Congress to call a convention of the states to propose constitutional amendments imposing fiscal restraints and limiting the power of the federal government, and imposing term limits on Congress.

Sen. Rob Clements said his banking background leads him to support the proposal. “As a banker, seeing people go more and more into debt, eventually they go to bankruptcy if they don’t control the spending or do something to correct that. And so I have been concerned for a number of years with the federal debt, and the possibility of a collapse of our government if we run out of people willing to loan us money,” Clements said.

Critics fear a convention of the states could become a runaway gathering that would propose other changes to the Constitution. Halloran said those fears are unjustified, adding that any amendments proposed would have to be ratified by three-quarters of the states