Handwritten notes in the margins of a nearly 150-year old book could provide some valuable insight into the courtship of two of Nebraska’s early leaders, Othman and Elizabeth Abbott, the parents of social welfare leaders Edith and Grace Abbott. The book sat forgotten on the back shelves of a museum in Grand Island until just recently.

Before we tell you more about the old book, let’s establish who the Abbotts were.

“Othman and Elizabeth Abbott were prominent citizens,” David Bristow with History Nebraska said. “They were people who held important mainstream positions in society. They were also really ahead of their time.”

Othman, who was also known at O.A., was a Civil War veteran from Illinois who fought for the North and was wounded twice. After the war, he settled in Grand Island and became one of Nebraska’s earliest lawyers. He was also the state’s first lieutenant governor. Elizabeth Griffin was also from Illinois and ended up teaching in Iowa. The pair knew each other from Illinois and started a long-distance romance. 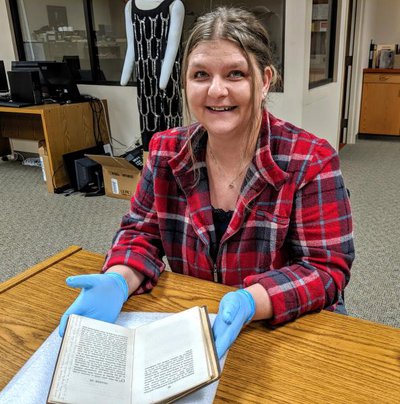 “They were people who did their own thinking and they liked to talk about ideas,” Bristow said. “They liked to discuss important issues.”

This is where the book came in. It was an 1870 hardcover edition of “The Subjection of Women” by author John Stuart Mill, an early proponent of women’s rights. O.A. and Elizabeth’s courtship and engagement included writing back and forth to each other in the margins of the book.

Kari Stofer is a curator at the Stuhr Museum in Grand Island.

Elizabeth eventually moved to Grand Island and married O.A.. She was one of the state’s earliest suffrage leaders. They had four children, including Edith and Grace Abbott, who would later become national leaders in social welfare reforms and women’s rights.

So what happened to that book O.A. and Elizabeth used as part of their courtship? That’s what retired teacher and part-time researcher Cathey Stuart McDermott wanted to know. While researching the Abbott sisters, she came across several references to the book. 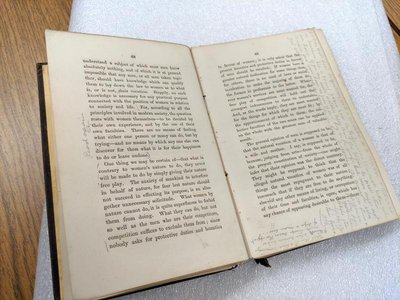 The old book found on the shelves on the Stuhr Museum in Grand Island. (Photo by Jack Williams, NET News)

“Helen Cody Baker had interviewed both Edith and Grace in their home in Chicago,” McDermott said. “And in that interview she writes, ‘During their engagement, Elizabeth and Othman had read and exchanged John Stuart Mill’s “Subjection of Women.” Their daughters have it still, with the marginal notes of the betrothed couple.'”

McDermott established the book was an important family heirloom, but beyond knowing the daughters had it in the mid-1930’s, had no idea what had become of it after that.

“When I was doing my research two years ago, I had not come across the copy, either at the Historical Society or Love Library Archives or Edith Abbott library,” she said. “I hadn’t seen any evidence of the book, so I didn’t know whether or not it existed.”

That’s when McDermott visited Kari Stofer at the Stuhr Museum in Grand Island. It was a long shot, but Stofer went to her card catalog in the archives to see if maybe the book was hidden somewhere in a vault of old items. 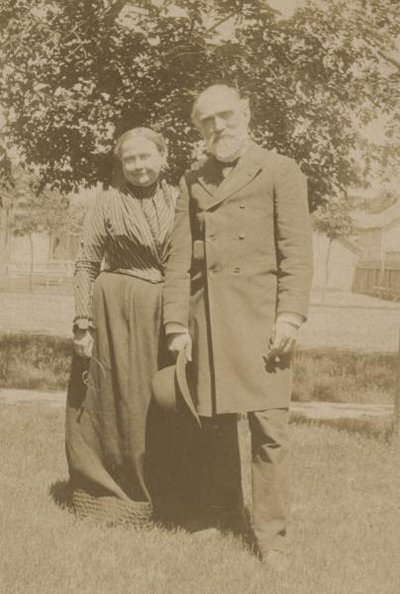 Elizabeth and O.A. Abbott. (Photo courtesy of the Stuhr Museum)

“I just pulled the drawer open and flipped the cards like that, you know how you have to find a place to start,” Stofer said as she stood in front of a drawer full of index cards.

The first card she saw was the location of “The Subjection of Women.”

“So I came down here and it was on the shelf right here,” she said, pointing to an empty space on a shelf full of old books.

Just like that, a piece of early Nebraska history had been discovered tucked away on a bookshelf.

“I saw it, I picked it up, I carefully took it into the other room and I didn’t actually tell her I’ve got it right now because I was only very gently carrying it,” Stofer said.

It was McDermott’s turn to be surprised. She was sitting in the other room.

“Low and behold, here she comes, with her hand like this, cradling this and my first instinct was, I know that’s it,” McDermott said.

Turns out the book had spent many years in a University of Nebraska collection and had been returned to the Abbott family in the 1970’s. In 1988, Edith and Grace Abbott’s niece donated the book to the Stuhr Museum, where it’s been ever since. It’s almost 150 years old, so it’s not in great shape, but it’s easy to make out some of the writing in the margins throughout the book. McDermott and Stofer say they’ve only been able to read a small portion of the writing, and so far it’s a mixture of romantic banter and serious exchanges about women’s rights. 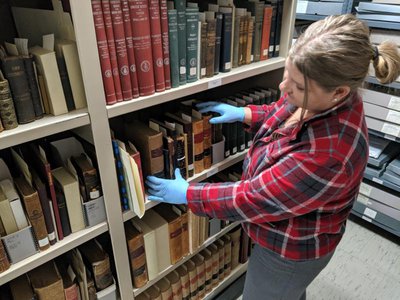 Curator Kari Stofer and the spot where she found the old book. (Photo by Jack Williams, NET News)

“The longer writings that are two or three sentences long I believe are O.A.,” Stofer said. “The shorter things that are more like pointing things out or highlights or things like that are Elizabeth’s.”

For McDermott, it’s an honor to hold a book that helped formulate the life’s work of Edith and Grace Abbott and was an important part of their parent’s early marriage.

The Stuhr Museum plans to carefully scan each page of the book with help from conservators at the University of Nebraska-Kearney. They’ll then stabilize the book and eventually put it on display at the museum.

It’s the story of a pioneer romance, early women’s rights and the foundation for the life’s work of two of Nebraska’s most prominent advocates of equal rights for all, Edith and Grace Abbott, written into the margins of an old book that will now help enlighten future generations.