Jay Kreimer of Lincoln talks about his art and music in his studio above his garage. (Photo by Dennis Kellogg, NET News)
This hand serves as both an art piece and a functional instrument when the fingers are depressed. (Image by Ralph Hammack, NET)
Jay Kreimer encourages those who attend his art shows to touch the objects. (Image by Dan Smith, NET)
Kreimer uses a bow to slide across metal spines in a bowl to create music. (Image by Ralph Hammack, NET) 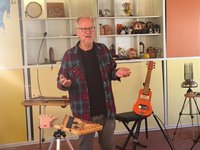 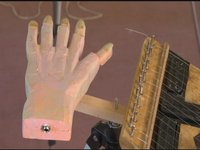 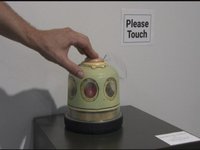 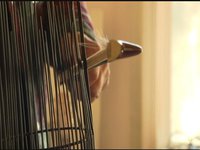 Jay Kreimer of Lincoln turns found objects -- from radon tubes to tennis racket strings to a strip of 16-millimeter film -- into art. And then he uses that art to make music.

Jay Kreimer’s “world” is a studio above the garage at his Lincoln home.

"I make instruments from found objects and common objects, and I search for the sounds that are hidden in them and release them into the world," Kreimer continued. 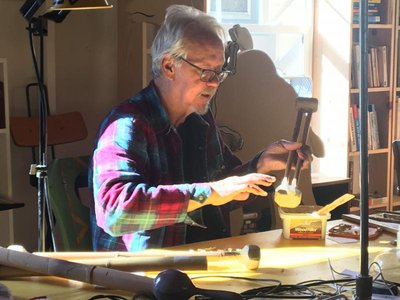 Jay Kreimer works on a new instrument and art piece in his studio. (Photo by Dennis Kellogg, NET News)

How’s that for a job description? As you walk through Kreimer's studio, you’ll see a workbench, tools and piles of often discarded objects.

"One thing that people usually notice is the amount of stuff that's around. And it's not from sloth. It's from curiosity," Kreimer said. "I never know how things are going to recombine, and it’s the recombining that means a lot to me."

When Kreimer says “recombining” he means putting a couple of unrelated common objects together to create something new – something abstract that’s art, but also makes music.

"So I’m building it for the sound, but I don’t ever ignore the look," Kreimer added.

Kreimer’s artistic creations are a treat for the eye and a tune for the ear. He’s played in bands since he was a teenager, and that’s where this all started… the search for a different sound.

"I mean if I’m going to be really honest, it’s probably an extension of that teen rebellion," Kreimer said. "It’s like, 'Enough of this stuff. Let’s hear some other things.'"

So he started modifying instruments. Then he mixed his eclectic tastes in both music and art. The result is some pretty unusual looking objects that make some pretty unique sounds.

"For instance, that orange tube over there."

He points to what looks like a tall mailing tube leaning against the wall with strings attached to it. 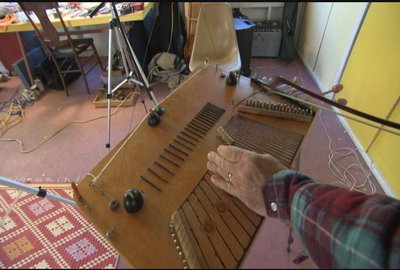 Jay Kreimer has played this string instrument in shows across the world. (Image by Ralph Hammack, NET)

"The tube was from a radon removal project, and the strings are made from a tennis racket string," Kreimer said. "I had acquired these things separately without a vision, but thinking, 'I’ve got to be able to do something with these.'"

The bass-like sound that comes out of it results from combining those objects. Next to it, sits a metal bowl with spines sticking up from it.

"I was in a thrift store, and those things were sitting next to each other," Kreimer explained. "I looked at them. I thought, 'I know what to do with that.' So I took it home, drilled a hole, put a pickup on, and it worked.

And these sounds reach far beyond the walls of his garage studio. Kreimer has played his art instruments for crowds all over the world.

"I played in D-22 in Beijing, which was the hip club at the time. It's gone now," Kreimer said. "I've played in a place called the Electric Church in Berlin, the Court Art Center in Ireland. I've played 12 cities in Europe. I've played all over this continent, a cool loft in Montreal."

Wherever Kreimer goes, he’s always on the lookout for that next combination of different-looking objects that sound different. He found what he was looking for recently after one of his performances on a college campus.

"They had some 16-millimeter film in a junk box for sculpture class. I thought, 'Well, I’ve never tried film. I wonder if that would work?' It does." 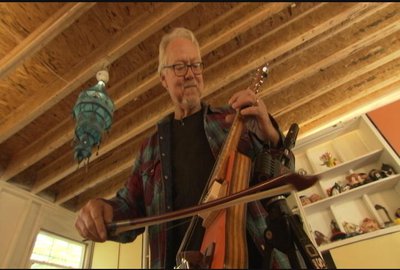 Jay Kreimer plays one of his artistic creations in his studio. (Image by Ralph Hammack, NET)

And after listening to the sound it made when Kreimer strummed it, he said, "Now who knew that 16-millimeter film would sound like that?"

That's the process Kreimer uses to see -- and hear -- the beauty in objects others just throw away.

"That's how finding things really works for me, just paying attention and stumbling on them," Kreimer said. "And it's not just plain luck. Apparently, it's having paid attention to this stuff for a long time, so I notice stuff."

And Kreimer’s "stuff" gets noticed. Whether people like it, or not so much. Either way, they notice.

"Sometimes the academics are like, 'That's not music,' but that's some old school that I feel is irrelevant at this point, conservative," Kreimer said. "Little kids and old people, they're not trying to be cool, so they just blankly love it. They love it."

Which is why Jay Kreimer will keep collecting everyday objects nobody else wants and turning them into art… and music.

Watch this "Nebraska Stories" feature on Jay Kreimer and his artistic and musical creations:

Nebraska Stories: The Sound of Things