Currently, you can’t serve in the Legislature unless you’re at least 21 when you’re elected or appointed. Sen. Matt Hansen wants to lower that age to 19. Hansen says 19-year-old legislators were elected last year in Wisconsin, New Hampshire, and West Virginia.

“These newly-elected officials are already hard at work on issues you would expect from the diverse set of experiences, including increasing voting accessibility, opposing sex trafficking, and promoting college affordability,” he said.

“In addition there has been a recent wave of civic engagement and activism from young people across the country. Perhaps the most momentous example was the high school student-led demonstrations across the country following the shootings at (Marjory) Stoneman Douglas High School in Parkland Florida last February. It is undeniable that these young people are highly active in the political process. It only makes sense for them to be on the ballot and for their fellow citizens to decide if they should represent them,” Hansen added.

No one spoke against the proposal. If it gets out of committee and through the Legislature, it would be on the ballot for voters to decide next year.

Another proposed state constitutional amendment would increase legislators’ salaries. Senators are currently paid $12,000 a year, a figure that hasn’t increased since 1989. The proposal by Sen. Tony Vargas would raise that to half the median household income in Nebraska. Vargas said that’s currently about $54,000, so the new salary would be about $27,000. And he said he was willing to consider an amendment so the new salary wouldn’t apply to any current senator. 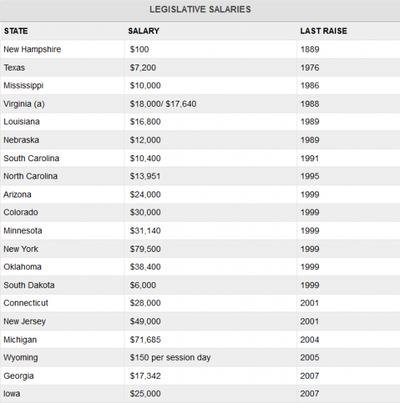 Nebraska was among the states which had not raised legislative pay in at least a decade, in this 2017 list from the National Conference of State Legislatures. New York and Minnesota have since raised theirs. For a complete roundup of legislative pay, click here.

Vargas said many people can’t afford to serve at the current level of pay. “This isn’t I would say a selfish deed this is …very similar to the other one for lowering the age to 19 – we just want to make sure more people can serve. And so I’m committed to working with other senators to make sure the different stories and voices of what working senators, what we’re doing – the hours that we put in -- so that we have an educated voter making a decision,” he said.

Sen. Ernie Chambers said he’d seen a lot of efforts over the years to increase senator’s pay, which is set in the state constitution. But Chambers said it’s difficult, because it’s one of the few salaries voters can control. He offered an illustration. “When counties swim upstream to spawn, bears catch them. Well, we’re in a situation where the bears cannot catch any of the salmon except one that they have by the tail. They can’t set the salary for the city council, for county board, for the U.S. Congress, judges -- only the Legislature. It’s a pretty poor fish, but they’re not going to let it go,” Chambers said.

As with the proposal to lower the age of eligibility, if it makes it through the Legislature, the pay raise would go before voters next year.

In other action, senators gave first-round approval to a proposal by Sen. John Lowe for Gov. Pete Ricketts. It would transfer responsibilities for inspections of amusement rides, elevators, and boilers from the Department of Labor to the State Fire Marshal’s office.

Sen. Steve Lathrop supported the proposal. “Some of these inspections aren’t done well. They’re not done by certified people. Mostly they go out and slap a sticker on something and don’t do a very good inspection. They’re not thorough,” Lathrop said.

Meanwhile, Sen. Justin Wayne discussed one of his proposals, to require the city of Omaha proactively inspect rental properties, instead of relying on the current system in which inspections only take place in response to complaints. The bill is in response to an incident last September where residents – many of them refugees – had to be evacuated from the Yale Park apartments in Omaha, although supporters say many more properties are also substandard.

Wayne said he’s asked for a two-week delay before debating the bill, to give Omaha officials time to act. However, he said “If this bill comes back up, it is through no fault but the city of Omaha ‘cause they have failed. They have failed the most vulnerable and oftentimes voiceless to supply and secure safe, affordable housing in … sustainable and acceptable living conditions.”

Sen. Machaela Cavanaugh supported Wayne, calling the rental housing situation in Omaha a crisis. “We have children that are living in abject poverty and horrible conditions. If we’re serious about the future of this state and the future of our children, we need to hold Omaha accountable to this,” she said.

Omaha city lobbyist Jack Cheloha said Mayor Jean Stothert and other officials are working on the problem, and will meet with Wayne and Speaker of the Legislature Jim Scheer in the next couple of weeks to discuss a way forward.