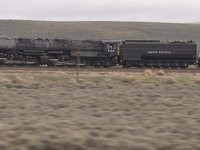 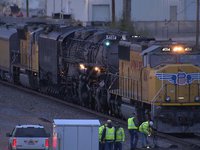 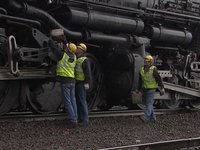 This summer the railroad’s specially-trained team will begin overhauling the steam locomotive known as Big Boy No. 4014. It is the world’s largest engine and holds a special place in the history of railroading.

Early in May, Union Pacific moved the Big Boy from a southern California museum to the company’s rail yard in Cheyenne, Wyoming. It will be the third steam engine to be made a part of the railroad’s fleet of historic rail stock.

CLICK HERE for an interview with UP Steam Team Manager Ed Dickens, Jr. explaining the restoration of Big Boy No. 4014 (Photo by Bill Kelly, NET News)

Fans of American rail history are ecstatic at the prospect of having the engine back in operation. Impressive crowds greeted the locomotive at each stop during the 10-day journey. A steady stream of train enthusiasts chased the train, attempting to keep it in sight whenever possible for video, photos or memories.

“Many rail fans like me never thought this would ever happen. To see a Big Boy, it became reality,” said 18-year-old Nick Valdez of Colorado Springs, Colorado, who was among the chasers. “It got me really excited.”

Valdez and his father braved unseasonably winter-like weather to watch as two modern diesel locomotives pushed and pulled the Big Boy on UP's main line. The pair was impressed with how good the retired engine looked. Fourteen black cast iron wheels churned by, shining under a coat of fresh grease, moving effortlessly the entire trip.

There were no signs of aging stiff joints, even where the massive engine is designed to bend in the middle to get its unnaturally long body around tight curves.

“The magic of the Big Boy” is how the project manager Ed Dickens Jr. describes it. He had to convince skeptics in and outside of the Union Pacific the restoration was not a folly, or worse, a monster that would damage the freight-carrier’s valuable tracks.

“Over the last 20 years the question has been asked, ‘Can a Big Boy run?’” Dickens said. He believes the trip from California to Wyoming dispelled many of those fears.

“I think people began to realize that this is doable,” Dickens said. 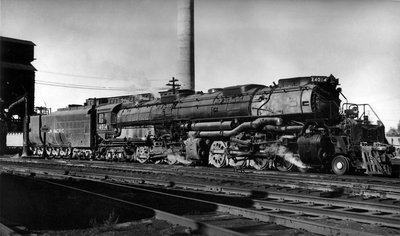 The last Big Boy was retired in 1962. Twenty-five of the engines were built in the 1940s and put into service hauling freight and coal through the steep mountain passes of Wyoming and Utah. To get the power to climb those grades, Union Pacific had been adding a second locomotive to nearly every freight train to make the trip. Designing a steam engine that could generate over 6,000 horsepower meant one locomotive could do the job.

Jim Ehernberger, a retired staff photographer for the railroad’s public relations department, said UP’s decision to invest in a small fleet of massive engines was all about saving time and money when demand for freight service was about to spike.

“Leaving Ogden (Utah) on an eastern train they could come out with one Big Boy with, say, 3,200 tons (to pull). They could come all the way to Laramie with that same tonnage so they didn’t have to switch a train,” Ehernberger said. “That was a savings” of fuel, labor, and equipment, all of which helped improve efficiency and profits.

The first went into service as war engulfed the European and the Pacific theaters. Supplies and munitions needed to be shipped quickly, and in large quantities, to both coasts. “These locomotives were needed during World War II,” Ehernberger said. “The locomotives were very critical. That was a great accomplishment.”

In its day the Big Boys made a mighty impression on all who saw them powering their way uphill. “The exhaust was a loud, loud whistle, and the ground actually vibrated a little,” Ehernberger said. “So it was a sight. It was a sight.” 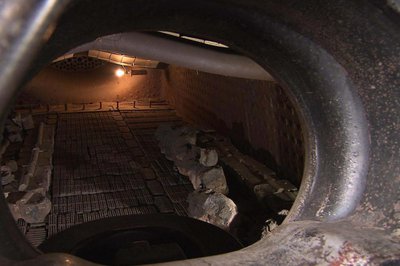 Inside the boiler's furnace on-board No. 4014. (Photo by Tyler Kersting, NET)

Economics and technology eventually ended the era of the Big Boy. After the war, coal suffered from its reputation as a dirty fuel. It became more expensive. A new generation of diesel-electric engines slid into service and pushed the behemoth Big Boy off to the side. After the last of the 25 in the fleet made a final run in 1959, most were scrapped and a few, like the 4014 from California, were put on display in museums around the country. (One sits on a hillside over-looking the Missouri River where travelers on I-80 can see it on their drive into Omaha.)

The UP steam team gave Ehernberger the privilege of riding in the Big Boy’s cab on the final leg of its trip to Cheyenne. He could barely contain his excitement about the railroad’s decision to invest in the restoration. He thinks it can only be a public relations boon for Union Pacific.

“Talk about a P.R. stunt,” Ehernberger crowed. “This is the master of all P.R. stunts!” 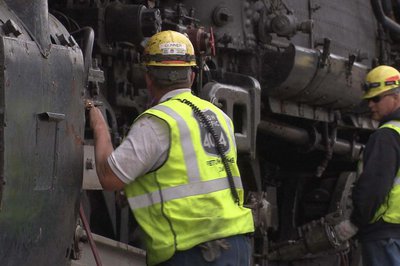 Now they face the daunting and expensive challenge of restoring the long dormant 4014. Dickens won’t promise a delivery date beyond saying it will take “three to five years.”

“We haven’t operated a Big Boy on the Union Pacific since 1959, so the infrastructure that was there back when they ran these is gone and the staff that worked on them, both operating and mechanical, are gone as well,” Dickens said while standing next to No. 4014. The day before it had been pushed into the massive "garage" at the Cheyenne rail yards where work will take place.

The locomotive's cast iron parts are all old. Dickens' hand-picked team is, by comparison, youngsters. “Because the world today, in the electronic age, virtual reality, video games, several of my staff didn’t even know what a steam locomotive was,” Dickens said. Instead he had “to find somebody who has that passion, the heart" for the job.

He’s confident they will succeed. Weeks of inspections and tinkering even before the locomotive was relocated convinced him most pieces can be put back into service, including “the most critical part: the pressure vessel,” he said. The boiler walls show no signs that rust or cracks have undercut the integrity of a vessel that needs the ability to withstand 300 PSI (pounds per square inch) steam pressure.

Steam is a powerful and tricky source of power. A weak boiler tank could explode with disastrous results. The crew wants to make sure they can fire-up the locomotive for public display without worry. “We are not going to reduce the pressure and baby the locomotive,” Dickens said. He insists safety is their highest priority. 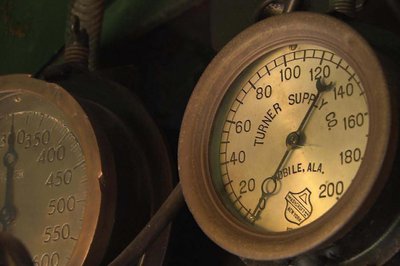 The steam team found the trip from California a useful opportunity to learn about the Big Boy. They had to make sure all the wheels and suspension were in good working order before taking it out. “We have to learn those little nuances,” Dickens said. “So the train is going to teach you something.”

The next step is to entirely disassemble No. 4014 to a stage where, to the a casual observer, it will only look like “a pile of parts.” In some cases new specialty parts, like the giant suspension springs, will be built from scratch by the companies who provide parts for the railroad’s more modern rail fleet.

Given the locomotive's age and complexity the restoration group doesn’t entirely know what challenges they will face. “This locomotive is so massive,” Dickens said. “Everything is designed to fit together so intricately that there is almost no room” to get to some pieces and parts.

When Big Boy No. 4014 rolled in Cheyenne the mayor and nearly 1,000 admiring fans bore witness. While the “steam whistle” blew, it was being powered by hydraulic air pressure the steam team had rigged up. Getting the boiler to make steam is a long ways off. For the fans, it didn’t matter.

“To see it coming on its home turf where it hasn’t been in over 50 years is something really special to see,” said Nick Valdez, the 18-year old train buff.

After riding in the engine for the last leg of the trip, Jim Ehernberger thought No. 4014 proved it’s as tough as ever.

Dickens and his steam team must first make sure everything runs perfectly and it all can be operated safely.

"Once we are comfortable with all those things, barring some catastrophe, this locomotive will run"

Advocate on Expressway Expansion: 'We Could Do Better' Listening to Rural Voices
Rural Public Transit? Nebraska's System Is Growing but Many Don't Know It Exists
Truck Drivers Being Trained to Help Spot Human Trafficking