Living the Dream in Nebraska, Returning the Wish to South Sudan

When most kids are four years old they are getting ready to enroll in kindergarten. But one such boy and his family who now live in Lincoln were instead about to embark on an escape by foot, across South Sudan and Ethiopia – a journey which would take five years.

Jacob Maluak Manyang was born in a small village called Kolmarek in present-day South Sudan. In 1991, when he was four-years-old, a military coup gave way to a civil war between the North Sudanese and South Sudanese and led his family to flee their village. He says soldiers came into his village looking for military combatants. He didn’t know it then, but his life was about to change forever.

"When they’d come and find people, they wouldn't care whether they were a civilian or not," Maluak Manyang said. 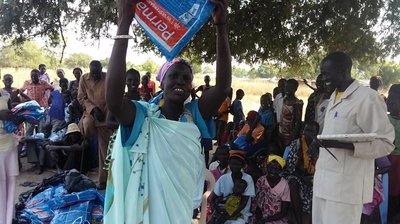 Sometimes these attacks would happen in the middle of the night. One night, Maluak Manyang says he was awakened by his father carrying him into the forest surrounding the village to hide from the armed men.

"When we came back there was no houses for shelter, the crops that were grown were all cut down and most of the cattle were killed," Maluak Manyang said.

From there his family and several other families walked to a nearby village. And this process of jumping from village to village happened for more than five years. Walking barefoot, through forests and shoulder-high swamp infested waters with crocodiles and hippos. Before arriving in Ethiopia, Maluak Manyang’s mother got sick and died. Then his father traveled back to their original village to find any relatives that had survived. Maluak Manyang and his brother didn’t find out until many years later their father was killed by North Sudanese forces.

There is no telling exactly how far Maluak Manyang walked over the five years he was on the run. Finally, Jacob and his brother arrived at a refugee camp in Ethiopia – more than 230 miles from their home village. There, Maluak Manyang had a chance to think about all he had gone through.

"I couldn't really tell why people were getting killed. That's one of the memories that is always there. It’s never going to go away. There are questions I could ask myself, like “Why is this happening?” But there were no answers," Maluak Manyang said.

Maluak Manyang’s story is one of many refugee stories in the United States. Annual refugee settlement limits in the U.S. have been cut drastically since 2016. 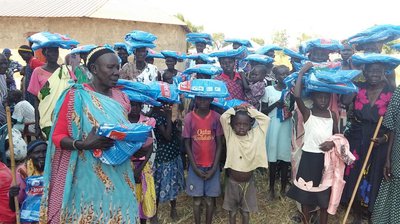 Refugees holding up packs of mosquito nets donated to them from Education Refuge. (Photo courtesy of Jacob Maluak Manyang)

Emily Sutton is the statewide administrator of community services at Lutheran Family Services (LFS) in Omaha. LFS provides many resources including adoption services, foster care and behavioral health. They are also the largest refugee resettlement group in Nebraska.

"Refugees are some of the most resilient, brilliant people," Sutton said. "We only see them once they've come stateside. They've been through quite a bit and they've overcome many barriers."

Sutton says refugees face hard decisions and sacrifices to get to the United States.

"Watching individuals that have come from really challenging political situations to owning their own home or being a business owner – to see the other and see people come to Nebraska, get on their feet and then to be able to pursue their dreams – it's very satisfying to be a part of that," Sutton said.

Chris Decker, professor of economics at the University of Nebraska at Omaha, says refugees overcome challenges and make a real impact on Nebraska. In 2017, Decker put together an economic impact study focusing on the impact of refugees on the state’s two largest metro areas: Omaha and Lincoln. 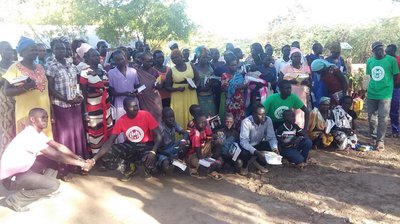 For every dollar’s worth of economic activity refugees generate, they add another $.60 cents to the economy indirectly – for example, through jobs created and increases in productivity. Refugees, in general, contribute the same amount as the rest of the population.

Decker says entrepreneurs can have more impact on economies because they are not only working, they are investing in other workers whose tax dollars help fuel the local economy.

Jacob Maluak Manyang, that young boy who used to run through the forest escaping attacks in South Sudan, eventually came to the United States. He went through elementary, high school and college, earning a bachelor’s degree in agronomy from the University of Nebraska-Lincoln. But he hasn’t forgotten those in his homeland…

"This was why I studied agronomy," Maluak Manyang said. "My plan is to be able to go back home and train local farmers to be able to grow food so they settle (land) in their countries."

Maluak Manyang has started a non-profit called Education Refuge as a way to train refugees in Africa. He says it’s hard for people to leave the refugee camps because of the lack of resources and opportunities.

"If they don't have food, their only solution is to go back to the refugee camp," Maluak Manyang said. 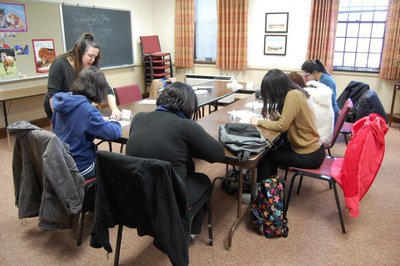 Refugee Returns To Nebraska And Shares Her Success Story

Nebraska Groups Help Refugees Settle in to the Good Life

Ricketts stands by opposition of resettlement of Syrian refugees in Nebraska

Maluak Manyang says in the refugee camps, inhabitants only receive one gallon of sorghum, a small container of beans and one cup of oil to manage for an entire month.

"But if you can give them farming supplies and teach them the modern way of farming, then they become independent," Maluak Manyang said.

Most importantly, he says, it would teach the refugees a vital lesson.

“They would have been helping other people now instead of people still helping them," Maluak Manyang said.

Education Refuge held a fundraising event in Omaha this month to raise money to help refugees in South Sudan and Ethiopia. The organization doesn’t qualify for local grants because assistance occurs overseas. Instead, they have to apply for international grants, which has proven difficult because of the larger pool of applicants.

They have traveled to the refugee camps to deliver 500 mosquito nets. Maluak Manyang says that has helped 500 people.

"But at the same time, there was so much needed that I felt like I wasn’t really doing much," Maluak Manyang said.

Eventually, the goal is to send farming tools and seeds, and then give them the training to cultivate their own land. Maluak Manyang says that’s the dream, but many people have been in the refugee camps for 20 years and have lost the ability to dream. He hopes to change that.