Flooding in March left a lasting mark on much of eastern Nebraska. Silt and flood debris carried by floodwaters now sit in corn and soybean fields. For Nebraska farmers in the midst of planting season, that means a lot of extra work.

Scott Olson and his family farm 3,000 acres of corn and soybeans near Tekamah. Part of his land sits along the river and flooded in March, as well as in 2011.

“How do you fix that stuff? It takes a lot of money and a lot of time, and something nobody has. Time maybe, but not the money anymore,” Olson said.

Olson is still deciding whether or not to try and plant the 500 acres or so that flooded. It would take a lot of work to get the land ready, and he worries about more flooding this year.

“If I fix this now, and we get a heavy rain up north, the water's gonna raise up and undo everything I did. So, right now, two feet of water on the, coming up on the river, I will not be able to get on that piece of ground, so do I fix it, and try to plant it, not knowing whether I've got more water coming or not? Cause if I get more water coming on there, it'll undo everything I did, plus wipe out all the crop that I just put on there,” Olson said.

Out in the fields in his pickup, Olson pointed to one of three large scour holes created by flooding last month. These are areas where flood water eroded large amounts of soil. 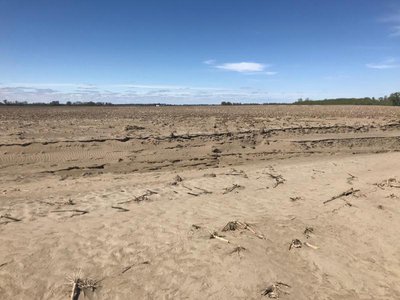 “If I take my thirteen-yard scraper, which is my biggest one, if I got out and start picking that soil up, I could probably work in this soil here for… if I could run twelve hours a day, it would take me two weeks to get this one filled up and leveled out so my drainage and stuff, if I was lucky,” Olson said.

Large holes in fields are one issue facing Olson and other farmers. Another is debris, including corn stalks, which flooding pushed into thick layers in some areas.

“I’ve got some that’s two and three feet deep. The ground is wet underneath. It’s dry on top. We burn it off. We’ll go back with a four-wheeler and a harrow section because the tractor’s too heavy and it’s too mucky underneath. So we’ll go in and we’ll stir it up the best we can and we’ll burn it again. I’ve got places I’ve burnt four times already and I still have two feet of debris down there,” Olson said.

Kelly Brunkhorst is executive director of the Nebraska Corn Board. He says producers wondering where to start should talk to their local Farm Service Agency or Natural Resources Conservation Service office.

“They have some great resources available and expertise in how to work at or work through the programs that are available for cost sharing, the processes that may need to be taken in order to remove this debris, all the way from tanks and stuff that floated down river to deceased livestock to tree limbs and stuff like that, to sand and silt,” Brunkhorst said.

Brunkhorst thinks there are fields that will go unplanted this year because the time and resources aren’t available to get them ready for crops. That will have a significant economic impact for Nebraska.

“We, along with the Department of Ag, took the lead in regards to estimating that sort of probably about $440 million worth of crop damages because of, as we look into 2019, unplanted crops, late planting, stuff like that that’s gonna happen this year,” Brunkhorst said.

Floods weren’t the only weather causing damage to farms

Caroline Clements is ag promotions coordinator for the Nebraska Wheat Board. She says heavy snow and cold temperatures may have damaged winter wheat crops.

“We had some concerns here with some of the recent cold temperatures and snowfall of a few weeks ago. We’ve got producers out west kind of evaluating right now for what we call winter kill or freeze damage,” Clements said.

Much for the wheat crop is farther west than the March floods, but Clements says the larger agriculture community is still hurting.

“At this point, it’s really a lot of our concerns, thoughts, and efforts helping any of the producers in that region that have been affected to recover. Because really in agriculture we’re all one big family, and so what affects one of us is, in the long term, gonna affect all of us," Clements said. 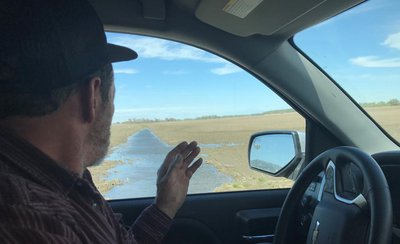 Back in Tekamah, Olson feels like the agriculture family has been harmed not just by nature, but by the Army Corps of Engineers.

At a meeting last month, Corps representatives said they did what they could to prevent flooding with the storage they have in reservoirs. They say the Gavin’s Point reservoir is meant to re-regulate the river when levels fluctuate due to hydro-power use at upstream reservoirs. This means it does not have significant flood storage space.

Whether or not there are changes to how the Corps handles flooding, Olson and other farmers are dealing with the second large flood in 10 years. Scour holes and built up cornstalks make planting season that much harder.

“We’re working a lot of ground we don’t usually have to work because of that so we’re spending more money trying to get a crop in. Every place I turn around I’ve gotta do something different. But I’m not giving up,” Olson said.

Perseverance will be necessary for farmers across the state as they work to get seeds in the ground this season.