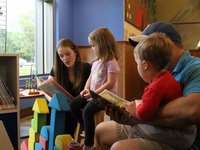 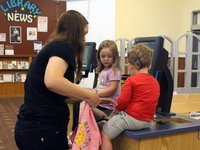 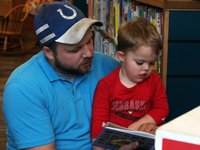 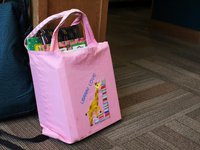 Public libraries across the state are considering getting rid of fines for turning in books late, and some advocate for the change as a social justice move.

Nick Wassinger and Katie Mohr-Wassinger bring their two kids to the public library in south Lincoln at least once a week.

"Mama I found something to read," 4-year-old Sabrina says. "Oh I read that when I was your age!" Mohr-Wassinger replied.

They check out 20-25 books on every visit. With fines at 35 cents a day, getting to the library after the due date can be a big headache. 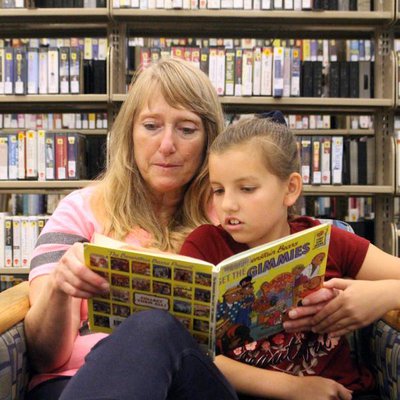 Brenda Ladig reads to 10-year-old Mya at a public library in Lincoln.

"There's a lot of stories that have exciting things to read about, and normally you have to try to find them at home and it's like you can't find them and you have to go buy them," Mya said. "So here you can check just them out and take them home."

"That was always stressful, because even if its one day overdue you have 25 books, that adds up really quickly," Mohr-Wassinger said.

But Lincoln City Libraries made a big change this year: no more overdue fines for kids and youth materials. That’s partly because overdue fines are more than just an inconvenience — they can be a pretty big barrier for low-income families.

Once fines get up to $10, you can’t check anything out of the library until you pay.

"Going back and eliminating those charges did mean that quite a few people who previously had been blocked when no longer blocked," said Lincoln City Libraries Director Pat Leach.

Leach says when a library card is blocked, it doesn’t just mean not checking out books and movies — those families often avoid the library altogether.

"We have never blocked anyone's access to actually using materials in the library, or attending our special events or any of those kinds of activities that happen in the library," Leach said. "But I think that for a lot of people, the fact that they wouldn't be able to check out materials, felt made them feel unwelcome, probably."

"It's the opposite of what libraries are all about, which is free and open access to everything," said Christa Porter, director of library development at the Nebraska Library Commission. "We want people to come in and use our resources, we don't want to be pushing them away or scaring them away."

Research shows the people most affected by overdue library fines are the ones most likely to need other library services, like internet access and after school programs.

The Nebraska Library Commission hosted a webinar aimed at convincing the state's libraries to stop collecting fines, led by DePriest and Crist.

"Fines don’t work, they cost money to collect and they harm the most vulnerable in our communities," DePriest told the participants.

In a resolution earlier this year, the ALA calls monetary library fines a form of social inequity. They say they’re discriminatory and create an unnecessary barrier to services. 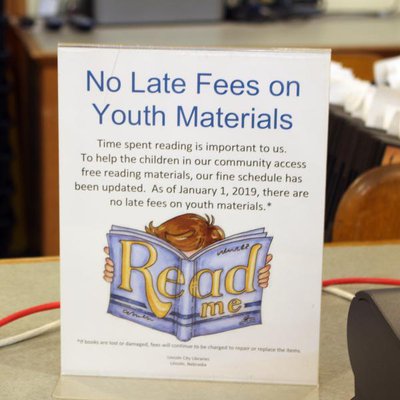 "I used to have families that would come in and be really concerned, that they would only check out two books at a time because if they went one day late that was a really big financial impact for them," said Wyatt Packard, Library Service Associate at Gere Public Library in Lincoln.

They're not the only ones; Andy Woodworth, a librarian in New Jersey, is leading an online campaign to "end library fines for everyone."

"Library fines are a pressing social justice issue for the modern library," Woodworth writes on his website. "There is no study or research which shows that library fines function as a mechanism to encourage timely return of materials. Instead, they serve as an economic barrier that impedes access to library materials and services for the financially disadvantaged people within our communities, particularly minors."

DePriest says a lot of libraries are resistant to getting rid of fines because they want everything to get returned on time. But the research shows fines don’t accomplish that, anyway.

"Punishing or rewarding people for returning stuff doesn’t work, there is no correlation," she said.

And getting rid of fines seems to do a lot of good – more people use the library and they borrow a lot more.

But some libraries still find the charges useful, especially in small communities.

Vickie Retzlaff is the Grant County Library Director in central Nebraska. They have just one branch in Hyannis, population 181.

"It’s pretty hard to break anybody at a nickel a day," Retzlaff said. "Our fines are charged to remind people."

Retzlaff says patrons can renew materials themselves, but even when they forget, library staff will renew it for them several times.

And they’re quick to make exceptions to the $5 limit for people they know well. In this community, that’s pretty much everyone.

"We don't charge fines in order for it to be a hardship to somebody, or if we know somebody can't pay it," Retzlaff said. "We're not out to take food money away from somebody."

The only goal is to get materials back so that others can check them out. As long as that happens, they’re generous in forgiving the fine, even years later.

"We believe it's far more important to get books and literature in the hands of our students and to establish positive relationships with students than it is to collect fees," said LPS Director of Media Library Services Chris Haeffner in an emailed statement.

Lincoln City Libraries doesn't charge late fees for children's or youth materials, regardless of who checks them out. That means a teacher who checks out 20 books for their students doesn't have to worry about late fines.

Retzlaff says a book by a local author was gone for more than a decade when the borrower accidentally took it with him when he moved out of state. The book had a lot of local significance and at the time they weren't printing it anymore.

So Retzlaff tracked him down in Arizona and he shipped the book back to the library.

Back in Lincoln, a library system with eight branches, those personal relationship aren’t always possible.

And because they still charge overdue fees for adult materials, about 7% of active library users can’t borrow anything because they owe at least $10.

Director Pat Leach says those fines make up about 1% of the budget.

"From a very practical point of view in the budget orientation, that's why we didn't eliminate all overdue fees at the same time," Leach said. "But in the next few years, we will likely be taking a look at that also."

They would join at least 430 libraries all over the world that have ditched fines altogether, including at least three in Nebraska.

The Nebraska Library Commission doesn't have an official stance on the issue, but Christa Porter says she's personally in favor of removing all fines.

"Anything that keeps people coming to the library and wants it to be a welcoming place, I'm all for that," Porter said.

Mohr-Wassinger says she’d love to see fines go away completely. The public library has meant so much to her and her family, and she wants everyone to be able to access it.