Despite supporters’ claims of majority support, a ban on employment discrimination based on sexual orientation or gender identity failed in the Legislature Tuesday.

Leading off debate, Sen. Patty Pansing Brooks, the bill’s sponsor, said supporters were stronger than ever, and suggested opponents were making insincere arguments. “The opponents are now avoiding a vote. But I believe that for the first time ever, Nebraska, we have a majority in the body that would pass this if we could get to an actual vote, rather than a filibuster. That is heartening. That is hopeful,” she said, inviting opponents to “bring on the baloney.”

What followed was several hours of intense debate. Sen. Joni Albrecht opposed the bill, saying government needs to defend constitutionally-protected freedoms like freedom of religion. “Lawmakers should not pass laws that intentionally limit individuals’ or businesses’ ability to exercise the freedom to practice their deeply held beliefs,” she said.

Sen. Rob Clements defended traditional views, including that marriage should be between a man and a woman. “To affirm what the Bible teaches, and Christians and Jews have affirmed for two thousand years is being called ‘hateful.’ That seems to me to be reverse discrimination,” Clements said. “I believe all persons should be treated with respect. But being 68 years old, and this issue’s come up in the last 10 or 15 years, I think it’s too late to change my mind.”

Sen. John McCollister read part of the Heartland Proclamation by Midwestern clergy supportive of lesbian, gay, bisexual and transgender people. “Silence by many has allowed political and religious rhetoric to monopolize public perception, creating the impression that there is only one Christian perspective on this issue. Yet we recognize and celebrate that we are far from alone as Christians in affirming LGBT persons are distinctive, holy, and precious gifts to all who struggle to become the family of God,” he read.

Sen. Machaela Cavanaugh castigated her male colleagues who were opposing the bill. “This is atrocious. This is disgusting. There is no reason in the world that we shouldn’t pass this wholeheartedly – 100 percent,” Cavanaugh said. “History will not look kindly upon you, gentlemen.”

Opposing the bill, Sen. Julie Slama argued supporters were saying some characteristics are fixed at birth, but that people’s identity can also be fluid. Sen. Megan Hunt, supporting the bill, said it can take time for some people to find their identity.

Slama said that meant the bill could pose a problem. “I’m confused as to how an employer is supposed to keep track of all of the different approaches a person can take to getting to their truth. Whether they see themselves as they were born this way or they see their sexuality as evolving -- how’s an employer supposed to keep track of where every single one of their employees is at on that particular day, and ensure that their workplace is hospitable to identities that the employer may not even be aware of at that point in time?” she asked. 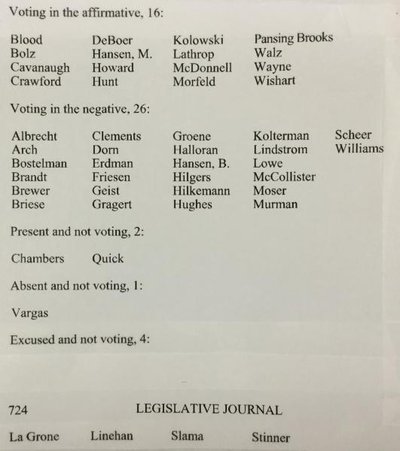 This was the vote on overruling Speaker Jim Scheer's decision not to proceed to a vote.

Pansing Brooks said high percentages of gay and transgender people still report discrimination. But Sen. John Lowe said government shouldn’t get involved. “I think it is likely that the market will respond without the need for government involvement, if such policies would be economically beneficial. Businesses will handle this on their own. They don’t need us to pass laws telling them what to do, and what not to do,” Lowe said.

As senators approached Speaker Jim Scheer’s three hour limit on debate, Sen. Matt Hansen moved for an immediate vote. When Scheer rejected that, Hansen moved to overrule. But his motion attracted only 16 votes, with 26 senators opposed, knocking the bill off the agenda and effectively killing it for the year.