A proposal to let people convicted of drug felonies get food stamps, or SNAP benefits once they get out of prison was blocked in the Legislature Wednesday.

Supporters of the proposal by Sen. Megan Hunt said providing food for people once they get out of prison would help cut down on the number on parole who return to prison.

Sen. Steve Lathrop of Omaha said that’s crucial at a time when Nebraska has a prison overcrowding crisis. And he accused opponents of playing politics. “Our Department of Corrections hit 163 percent of capacity. We are now in the midst of a lawsuit by the American Civil Liberties Union over the conditions of the Department of Corrections. And now we have a small piece that’s before you for your policy consideration, and we’ve taken it off into campaign stuff,” Lathrop said.

Sen. Steve Halloran adamantly opposed the proposal, which he said would allow someone convicted three times of felony drug offenses to still qualify for SNAP. “Fool me once, shame on you. Fool me twice, shame on me. Fool me three times, shame on this body for proposing this legislation,” Halloran declared.

But Sen. John Lowe of Kearney said the benefits wouldn’t help. And he ridiculed supporters’ arguments. “’Drug addicts deserve SNAP.’ Really? How does this help? If you give them SNAP – free food – will they not still be drug addicts?” he asked.

Sen. Sara Howard, whose sister Carrie died of a prescription opioid overdose 10 years ago, said opponents were relying on stereotypes. “When we say that someone has cancer, we don’t say ‘You are cancer.’ But when someone has substance use disorder, we say ‘You’re an addict.’ And we sort of feed that idea that it’s not that they’re sick, but it’s that they’re criminals,” Howard said.

SNAP benefits are 100 percent paid from federal funds; the state bears only half the administrative cost. The Department of Health and Human Services estimated that cost at about $38,000 for processing applications from about 800 people, which it said it could handle with existing staff. 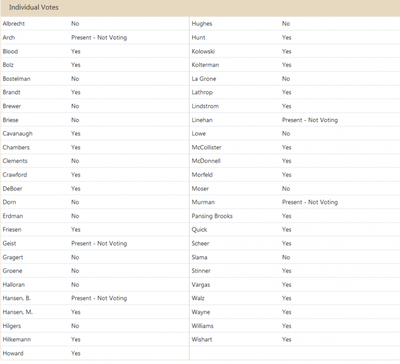 This was the vote to end debate and vote on the proposal. Thirty-three votes were needed.

Sen. Ernie Chambers accused opponents of hypocrisy, saying the same arguments against providing federal SNAP benefits could be used against providing federal aid to farmers. “Let these people who got flooded out just go somewhere else and get a job. For these farmers who can’t make it and accept handouts in the form of price supports for farmers, let them get off the farm and go to the city and get a job,” Chambers said.

Lowe responded. “Yes, Sen. Chambers, they will be coming to the cities and the towns to work because they have a debt to pay, many of them to the bank. They’ve lost their livelihood. They will come to towns to work, to put in 8 hours, 10 hours a day or more, and then go back home and clean up their homes, and their lot, their fields, their pastures. They’ve lost their livelihood. Their cattle are gone. Their pigs are gone. Their livestock are gone. Millions wiped out in a week,” Lowe said.

As debate neared an end, Halloran summed up his opposition. “I’m not willing to allow a felon drug dealer to have a third opportunity to ruin people’s lives,” he said.

Hunt pointed out an amendment she supported would still prohibit SNAP benefits for people convicted of distributing drugs. “Sen. Halloran should know that felon drug dealers won’t be eligible for SNAP under this amendment, so his points that he just made are heard, but they’re not relevant to this amendment,” she said.

Hunt then tried to cut off debate and proceed to a vote on the bill – a move that takes two-thirds of the Legislature, or 33 votes. She got only 28 – a majority, but not enough to cut off debate, with 16 senators opposed, and five senators present but not voting, which has the same effect as a no vote. That means the proposal is dead for this year.