The Nebraska Legislature Wednesday rejected an effort to introduce a bill calling for coronavirus safety measures in meatpacking plants. And lawmakers debated a bill prohibiting certain abortion procedures. (By way of caution, this report contains some graphic language).

Sen. Tony Vargas wanted to introduce the meatpacking safety bill, which would have included requirements like 6-foot-distances between workers and required temperature checks. Vargas is the son of Peruvian immigrants whose father died from COVID-19, and he represents a largely Hispanic South Omaha district. He said while Nebraskan’s population is 11 percent Hispanic, that group represents 60 percent of the state’s COVID-19 cases. Vargas said twenty percent of those cases are among meatpacking workers, not counting infected family members and friends, with 230 hospitalizations and 21 deaths.

“COVID-19 has affected us. But the part that’s harder about all of this is that it doesn’t affect all of us equally. It affects some of our businesses. It affects our well-being. But in terms of the health of individuals… it’s just hurting people that look like me, and it’s hurting people that look like me that are working essential jobs that don’t have the choices as to whether they can or cannot show up to work,” Vargas said.

Sen. Joni Albrecht opposed introducing the bill. Albrecht said her district includes a Tyson plant, which she called the largest packing plant in the country, in Dakota City. She said the plant employs 4,300 people and has had 600 cases of COVID-19, but only seven hospitalizations.

“I have not had one phone call to my office from any employee complaining about that plant,” Albrecht said.

Sen. Mike Groene also opposed introducing the bill, saying meatpacking should not be singled out.

“Everybody got caught off guard with COVID -- everybody. Every industry. And the private business has reacted quickly. Twenty one deaths, but when was the last one?” Groene said.

Nebraska Department of Health and Human Services spokesperson Leah Bucco-White said Wednesday the most recent death from COVID-19 among meatpacking workers was July 12.

Sen. Steve Erdman also opposed Vargas’s initiative. Erdman said from talking to people in the meatpacking industry about safety precautions, he had reached a conclusion.

Sen. Tom Brewer said cattle producers and meatpackers in his Sandhills district were worried about the bill.

“They were chilled to the bone. They said if we do this, you will force us to close or reduce production to a level that will not be sustainable for our businesses,” Brewer said, asking Vargas “How would you respond to that?”

“The concern that you bring up is the exact concern that we should have when we have a hearing,” Vargas replied.

Vargas needed special permission to introduce the bill later than the usual limit of the first 10 days of the session. Sen. Matt Williams, supporting Vargas, asked rhetorically if something had changed to justify suspending that rule.

“I would argue yes, that there has been something that has changed, and that’s COVID. It has changed every one of our lives,” Williams said.

And Sen. Ernie Chambers suggested the lack of protections for workers showed a double standard.

“The work in these plants has been deemed essential. But the workers have been deemed expendable. That should not and cannot be,” Chambers said.

It would have required votes from 30 senators to introduce the bill. Vargas got only 28, with 10 senators opposed and 11 not voting. He later introduced it as an amendment to another bill, and it will have a public hearing next Thursday. But that bill is not prioritized, making further legislative action this year extremely unlikely. 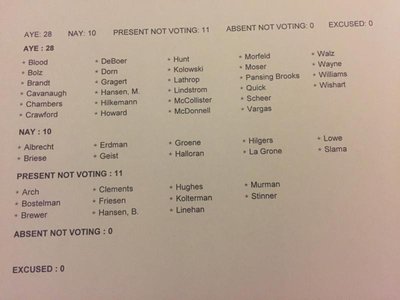 This was the vote on Vargas's bill introduction attempt. Not voting has the same effect as a 'no' vote.

Wednesday afternoon, senators took up a proposal by Sen. Suzanne Geist to prohibit an abortion procedure known medically as “dilation and evacuation,” or D &E, and called “dismemberment abortion” by abortion opponents. The procedure is sometimes used in second trimester abortions.

“LB814 would end the practice of killing a live baby in the second trimester of pregnancy by pulling off its arms and legs piece by piece until it either bleeds to death, the spinal cord is cut, or its skull is crushed,” Geist said.

Sen. Megan Hunt opposed the bill, saying it would prohibit what is sometimes the safest procedure for a woman seeking to end a pregnancy, possibly because of fetal abnormalities.

“The decision about the most appropriate method to end a pregnancy – it belongs to the woman and her doctor. Not with politicians, because every pregnancy is different,” Hunt said.

“The state cannot put a restriction on abortion that is not medically necessary, because it would impose an undue burden on a woman’s constitutional right. There is no ambiguity in this,” Morfeld said.

“Nebraska has already banned abortions after 20 weeks. The federal government has banned partial-birth abortions. Whatever the Supreme Court’s jurisprudence is on abortion, it is necessarily true that the state can prohibit some,” Hilgers said.

Senators used up the time allotted for debate without reaching a vote, meaning Geist will have to show she has enough votes to overcome a filibuster for it to be scheduled for further debate. Her office said she is working on securing that support, and is optimistic she can get it.

Correction: An earlier text version and the audio version of this story contained an incorrect name for the dilation and evacuation procedure.