The Nebraska Legislature voted Tuesday night to add another volatile subject to the packed end of its 2020 session: abortion. (As a caution to listeners, this story contains some graphic language.)

Sen. Suzanne Geist is proposing to ban an abortion procedure commonly used in the second trimester of pregnancy. Medically known as dilation and evacuation, or D & E, the procedure involves dilating a woman's cervix, using suction and forceps to remove the contents of the uterus. Opponents call it “dismemberment abortion.” Until Tuesday, Geist’s proposal had been stuck in a divided Judiciary committee. Geist told her colleagues the issue was important enough to merit their consideration.

“How we as a society treat the vulnerable and defenseless is worthy of a hearing, and worthy of our debate,” Geist said.

Geist said while the procedure is commonly used nationally, it is relatively rare in Nebraska. Sen. Rob Clements said it had been used in only 59 out of 492 second trimester abortions in Nebraska in the last three years.

Sen. Megan Hunt opposed the measure, and said debating it would eat up valuable time in the remaining 15 days of the legislative session.

“Colleagues, please understand that this bill is going to go the distance. We’re going to take every minute possible on this bill. I’m going to pull every shenanigan out of my sleeve to stop this bill. And that might not be something you like but when you play stupid games, you win stupid prizes,” Hunt said.

Hunt said in every state that has enacted such a ban, it has not gone into effect because of court challenges and other actions. And Sen. John McCollister, another opponent of the bill, said defending those bans had cost states millions of dollars.

But Sen. Mike Hilgers, supporting the proposal, said the outcome could be different in Nebraska. “Ultimately in the states in which bills similar to this have been declared unconstitutional, it’s because by restricting this procedure you have functionally restriction abortions in toto. And under Supreme Court precedent, that is unconstitutional. The facts here are quite different and I believe strongly support the constitutionality of this particular bill,” Hilgers said.

Sen. Adam Morfeld, opposing the bill, suggested supporters who professed to be looking out for vulnerable life had opposed other proposals to help vulnerable people.

“I would like to ask where some of the members of this body, including the introducer of this bill, was on Medicaid expansion? Paid family leave? Access to affordable contraception? Expansion of SNAP benefits? Increasing the minimum wage?” Morfeld said.

But Sen. Ben Hansen, supporting the bill, expressed amazement that it was even being debated. 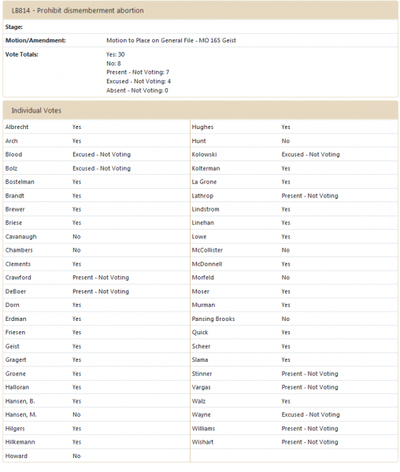 Here's how individual senators voted on pulling the bill out of committee for further consideration.

Geist said the bill was a reflection of social attitudes in general. “The reason to take time on this is. to the degree we as a society value those who are vulnerable, who have no voice, who can’t speak for themselves, that is a direct corollary of how we treat each other as adult human beings,” Geist said.

After about an hour and a half of debate, lawmakers voted 30-8 to pull the bill from committee and put it on the agenda for the full Legislature to debate further. It would ultimately require the support of 33 lawmakers to overcome a filibuster.