The 2020 legislative session got its start last week, with senators back in the capitol working on the big issues facing Nebraskans. But keeping all that work running is a group of dedicated young people. Members of the legislative page program keep the unicameral on its feet and caffeinated.

“All day. It’s a lot of coffee. We make probably two big pots a day,” said Madeline Brown. She is a senior studying history and political science at the University of Nebraska-Lincoln. She’s returning for the second year as a page in the Nebraska legislature.

“I paged for the health and human services committee," Brown said. "So you heard all different stories about all kinds of things, like nail techs and like fingernails and things like that. Just things you would never think about.”

Brown plans to attend law school after taking a gap year. She shares her legal dreams with many other pages, and the legislature is a good place to learn from people who were once in her shoes.

“A lot of them are lawyers," Brown said. "You kind of learn what are good ways to communicate and good ways to get your point across, I think.”

But first, the pages had to learn their new job. About thirty of them gathered in the legislative chamber, sitting at desks that will soon be filled by senators. Clerk of the Legislature Patrick O’Donnell paced up and down the aisle.

“What happens here is what makes the state of Nebraska run," O'Donnell said. "Governors like to take credit for things that they propose and do. Governors propose. Legislatures enact. Okay? Big difference.” 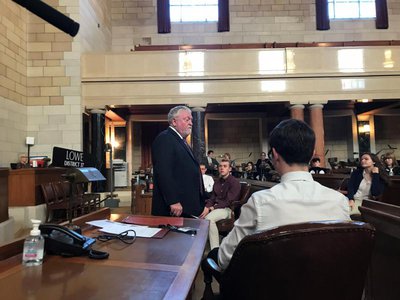 O’Donnell told the group they’ll learn a lot from their page work, and experience all different kinds of people.

“You’re gonna get to learn a lot about Nebraska, about the men and women who have been elected to represent you," O'Donnell said. "You’re gonna like some of them. You’re not gonna like them all. Okay? It is a representative body. You’ve got all kinds of people in here.”

The training also explained the pages’ duties. On the main floor of the legislature, pages sit at the very front of the room, where they can see the senators and a box filled with rows of lights. If a senator needs assistance, they can push a button on their desk that illuminates the light by their name in the box. 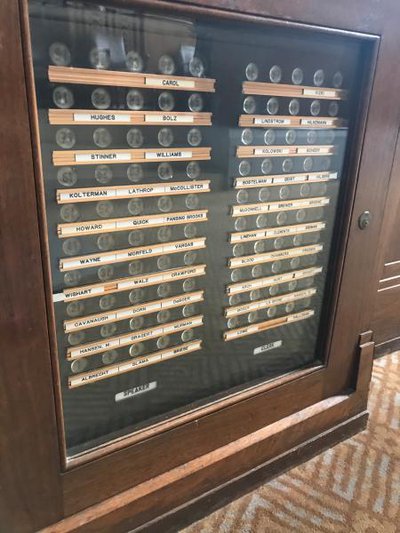 “Two pages will be mics and timers, so they’ll sit up by the presiding officer and then you control whose microphone is on when, and then the person doing timers has to keep track of how many turns each senator has had to talk, because they’re limited," Bielenberg said. "So that one’s probably the most entertaining job because you have a solid thing to do through the whole session.”

Bielenberg is a senior at UNL studying political science and Spanish. Pages generally work 20 hours a week in addition to their school work.

“I think probably the most challenging part is the time commitment, because it is a lot, and you’re a full time student as well," Bielenberg said. "Some jobs, if you work at a desk or something you could maybe do homework, but here you’re doing stuff and not doing anything else for four hours every day. So it’s kind of a lot.”

The job pays just a dollar or two more than minimum wage, but for Bielenberg, the time is worth it to learn about how Nebraska’s laws are made. She’s applying to law school, and might someday make her way into politics.

Some pages make their way back to the legislature.

Brandon Metzler is assistant clerk of the Nebraska Legislature. He started as a page during college. He’s leading the page program this year.

“The building got in my blood and I just wanted to stay," Metzler said. "Went off to law school and then got a call from the clerk that he was interested in filling his research assistant position. So I came in for the clerks office, did some of the behind the scenes work for them. And then from there took the bar, passed the bar this summer, and came on as an assistant clerk to the Nebraska legislature.”

Metzler and other staff in the legislature work to protect students in the program. In an era where many government bodies are confronting sexual harassment in the workplace, all senators, staffers, and interns go through training on sexual harassment.

“Senators and staff have theirs, and then pages have one that’s actually specialized to that kind of legislative environment where there’s some different power structures and what not. So they get specialized training in sexual harassment," Metzler said. "They’re always in communication with somebody if any sort of situation would arise. So we do have a couple of fail-safes in place for that sort of situation and thank God it has not happened here.” 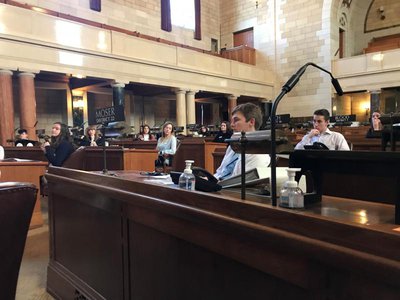 Students sat in the seats of Nebraska's senators as they went through page training. (Photo by Allison Mollenkamp, NET News)

Metzler helped hire this year’s pages. The program received about 60 applications, and narrowed down to 30 in the interview process. Metzler is heading the program temporarily. Its long-standing leader, Kitty Kearns, passed away in spring of 2019.

“Kitty was here over 40 years," Metzler said. "I want to say ’68 or ’69 was her first year and she was in the page program herself and then just rolled that in basically into a head page position and became the page coordinator after that, and was a motherly figure almost to a lot of the kids.”

As the legislative session ramps up, Metzler hopes this year’s pages will fall in love with the capitol, and with Nebraska’s unique government, just as many pages have before them.